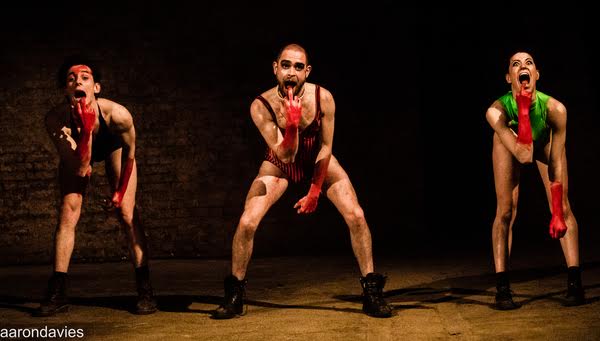 Wild Worlds: V is a selection of tableaux, images and disjointed visual references. It is hyper-real, referential and takes it’s three and a half actors (Gabby Sellen appears as a disembodied mouth and head only) beyond human representations to become absurd parodies of themselves. It is playing Wednesday to Sunday each night for the next two weeks as part of the fantastic arts and theatre weirdness that is the Vaults Festival 2016 underneath Waterloo station.

This is the third Wild Worlds and while each show is entirely different, they pick up on some of the same themes and are all part of the Artful Badger universe. Ideas about breaking free of day-to-day life, activities and other people’s expectations underpin much of their work. This show, with an emphasis on that love – “an overpowering, sometimes underwhelming and never easy four letter word”  – is really quite a dark exploration. 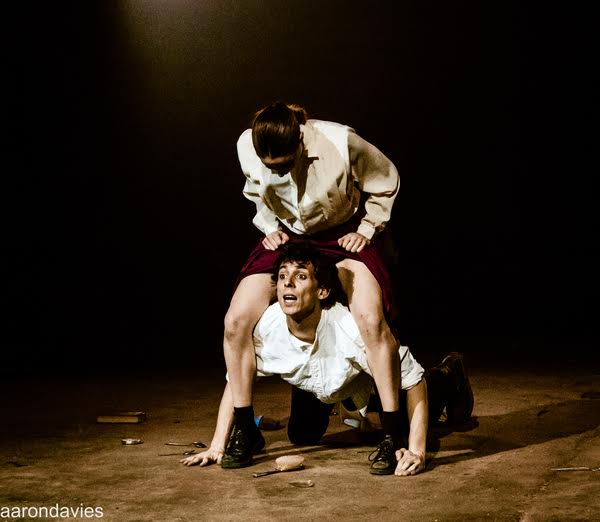 Love can be just as much a prison for some as it can bring joy to others. A couple try to hold each other together only to implode. Another performer asks us why “we are so important”, why do we think so highly of ourselves, how arrogant to think some God might care about our meaningless lives. With samples of literature from Dante realised in a “Becketesque” fashion these vignettes together create a tapestry of ideas, impressions and associations, like a surreal hermeneutic circle.

This is not a stationary piece, as the show takes the audience through different parts of the cavern. To delineate the space, great use is made of lighting to change the feel of the environment from a large stark open void, to a dark intimate place made up of a single torch. The strongest part of this production is the visual ideas at the centre of each section. With very simple effects director Zoë Cobb has created unique and powerful flashes of how our lives can be, told through dance, movements and physical theatre. 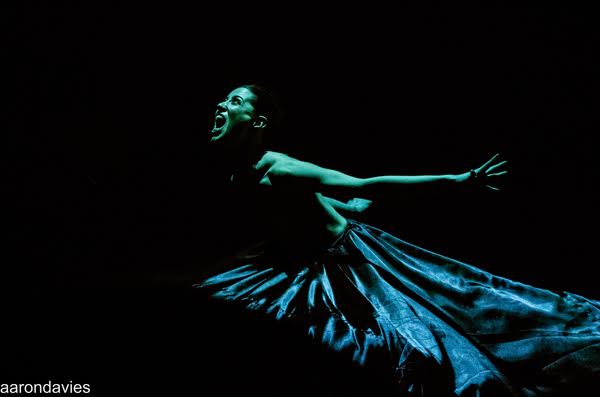 Due to funding issues this show is much more stripped down than last years “spirit of the festival” award winning Wild Worlds: Dark Side which had a bigger cast, projections and some notable aerial work with harnesses and a large loose net. This brings to mind the age old adage that less is more: this show feels better realised, a bit more focussed and cohesive and is a good example of where restrictions have actually helped the artistic process.

The last words must go to the Vaults Festival itself. If you have never been then do go see this show or something else that takes your fancy. There is a great selection of comedy, fringe theatre, dance, artwork, experimentation and a great atmosphere. With so many shows taking place simultaneously it’s great to see something and then chat to people in the bar and hear about what else was on during the evening. Despite the incredibly diverse programming and the tremendous support the festival gives to companies who come through the doors, they receive no arts funding for it. A petition is planned to try and help them get more recognition, for now give your support by heading down to take a look at what’s on offer.

Wild Worlds: V continues until 13 February at The Vaults. Tickets are £16. More information