Review: These Books Are Made For Walking 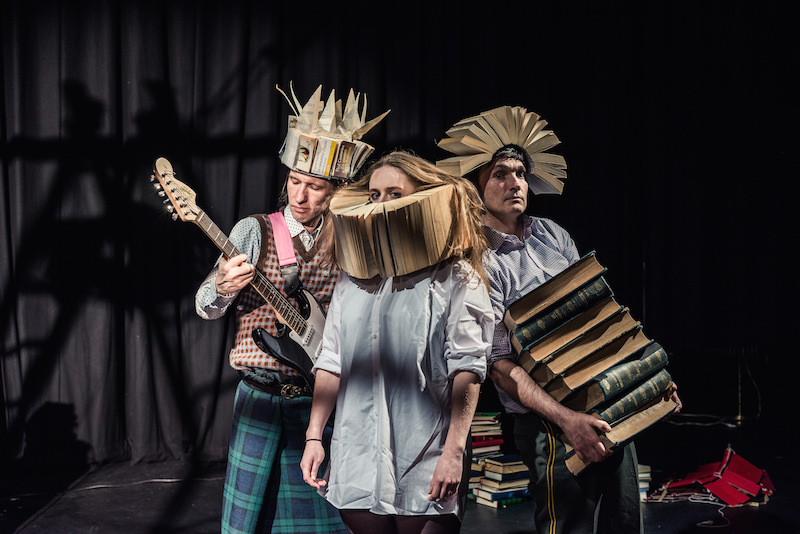 These Books Are Made for Walking is a new production chiefly devised by multi-skilled circus artist Alice Allart, clown performer Fabrice Dominici and musician Patrice Colet. Suitable for children and adults, the story unfolds with a lonely librarian (Dominici) who discovers a wondrous creature (Allart) coming out of the books one night to liven up his otherwise dreary world; she is a fairy, a samurai, a heroine, and all his meticulous work is shattered as books rain down from a precarious setup of interconnected ladders.

The plot is sort of Night at the Museum with elements of the Manic Pixie Dream Girl trope. While the MPDG association can often be negative – a two dimensional whimsical female who exists solely to teach the man how to rediscover the child within – here Allart’s character seems more fleshed out, existing for herself. While the stage is otherworldly, the piece feels somehow instantly recognisable.

If you are into clowning then this is a show that had the audience laughing along; if you are more into acrobatic circus, it is a little thin on technical tricks, with what amounts to a very big buildup for essentially a short section of slack rope. It is a good payoff though, as slack rope is rarely seen in comparison to many other disciplines and is creatively performed here between two ladders held by Dominici and a member of the audience.

I would have liked to see some more developed circus activity. Allart starts to manipulate several books, which feels promising, using movements akin to hat juggling. But it ends up as quite a short section and never really gets going. Elsewhere, high above the audience she moves into a “crocodile” handstand position, which appears to signal the start of some acrobatics, but again this doesn’t go any further. These false starts whet the appetite without feeling satisfying, and give way to the music and theatrics leaving me wanting more.

The major strengths of this piece are the poetic elements, the imagery of the books and their creative use in costumes, and the sense of fantasy that is conjured up from relatively simple set and props to create a whole much bigger than its parts. The music, performed live by Colet, meanders along and creates a loose structure that is reactive to the action rather than informing it. Involving the audience intermittently feels like a very natural way to draw in the spectators. Overall this show feels like a childhood dream, whose innocence is refreshing – and there is apparently a “more relaxed” version for children with autism, which I imagine would work well.

The production feels unified as a whole and I think a family audience would really enjoy it’s premise and the gentle way much of the action unfolds. Having two of the performers atop the ladders for the majority of the performance creates a wondrous space, and I’m sure many children dream of being able to break the rules so completely, ignoring authority and throwing books around to disrupt the ordered world of adults. I know as a child it was what I fantasised about during endless turgid assemblies.

These Books Are Made For Walking. By Bikes & Rabbits. Touring 19 Mar – 2 Apr. http://www.bikesandrabbits.com