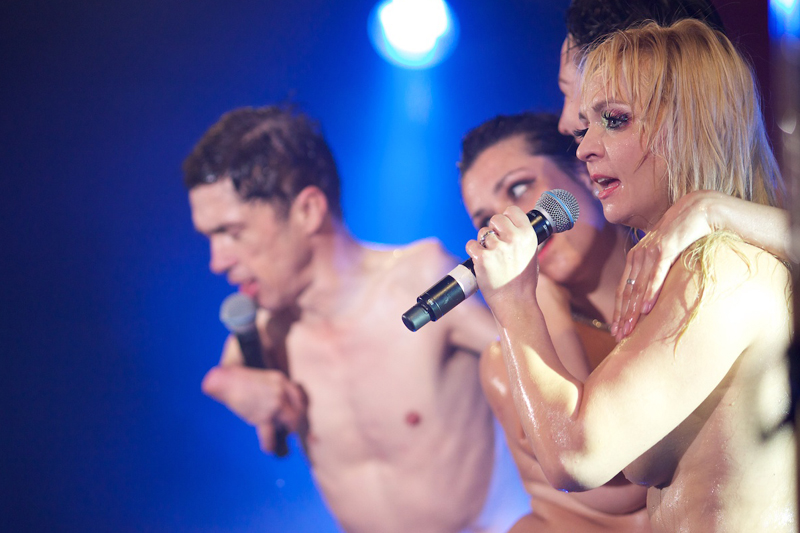 Wild entertainment beyond the reach of decency, virtue and licensing laws is what follows whenever Mat Fraser and Julie Atlas Muz share the stage. Billing themselves as The Freak and the Showgirl, the two performers specialise in graphic antics that mock all notions of propriety and political correctness. Apocastrip Wow, their latest revue, laughs grimly at the approaching apocalypse that Mayan prophecies have thrust upon a world already consumed by war, nuclear disasters and poverty.

There’s no exaggeration in their collective appellation. Much of the grisly humour in Fraser’s routines is based on his thalidomide-induced phocomelia, a congenital atrophy of the arms. Muz, in turn, is an internationally acclaimed award-winning burlesque artist. Together, the freak and the showgirl display a wide gamut of sophisticated stunts. 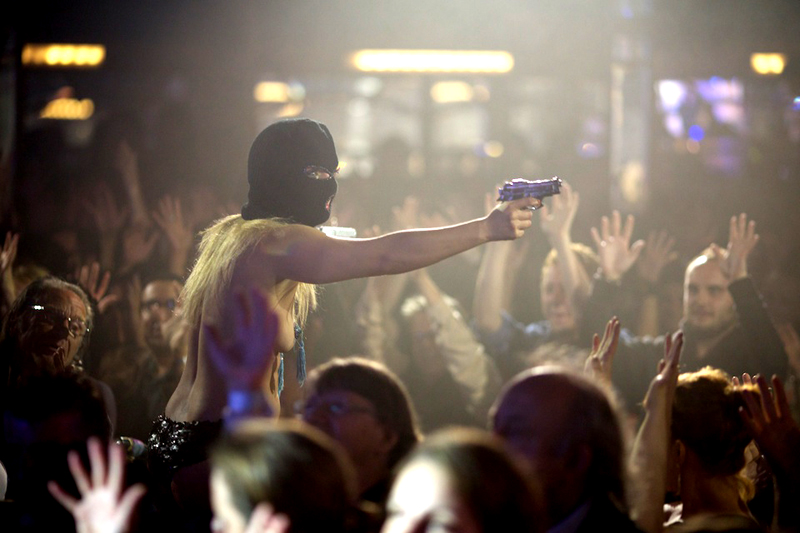 They’re not all gruesome or inherently shocking: stepping behind Fraser, Muz lends him her arms for a series of magic tricks and a ukulele rendition of It’s Only A Paper Moon. By contrast, their double act to The Battle Hymn of the Republic is a sticky, deranged naked interpretive dance with plenty of…touching.

They also perform in solo sketches, introducing each other. Julie Atlas Muz’s distinctive style of burlesque blends clown and performance art with comical excellence. Her rope escape number has the farcical charm of a Tom and Jerry cartoon. Later, the American entertainer brings the house down with manic cheer at her glow-in-the-dark striptease, in which swallowed props come out of unexpected places to the tune of Kraftwerk’s Radioactivity.

The same range informs Mat Fraser’s own skits. In one moment, he’s executing high kicks in the nude to loud techno. In another, he’s singing candidly in a beautiful booming voice. With an accomplished American accent, he performs his Sealo the Seal Boy monologue, adapted from the homonymous routine that late sideshow artist Stanley Berent (also afflicted with phocomelia) used to present at travelling sideshows in the USA. Delivered with calculated artificiality, it parades a string of bad puns and double entendres in a parody of lurid fairground attractions. A full-length show like Apocastrip Wow showcases Fraser’s diverse output beyond the ghoulish nightmares he’s known for in London’s variety circuit.

An elaborate segment starts as a cop striptease by Muz, turns into a terrorist kidnapping of eight volunteers (for a butt-shimmying competition) and ends in a beer-drenched foursome of simulated sex and abuse. Cackling, gasping and wolf-whistling at the debauched pageant is a packed audience: seizing the momentum from Fraser’s guest appearance at the closing of the 2012 Summer Paralympics with Coldplay, the one-off show sold out the 500-plus seats at the Priceless London Wonderground spiegeltent.

Muz and Fraser hoist many flags in their attack on conservative decorum. Their loud improprieties scream against homogenised beauty standards, censorship, socio-political indifference and other morally dictated cultural gags. Their greatest triumph, though, is that they never preach: above all else, they defy convention in the service of honest, uncompromisingly inclusive fun.