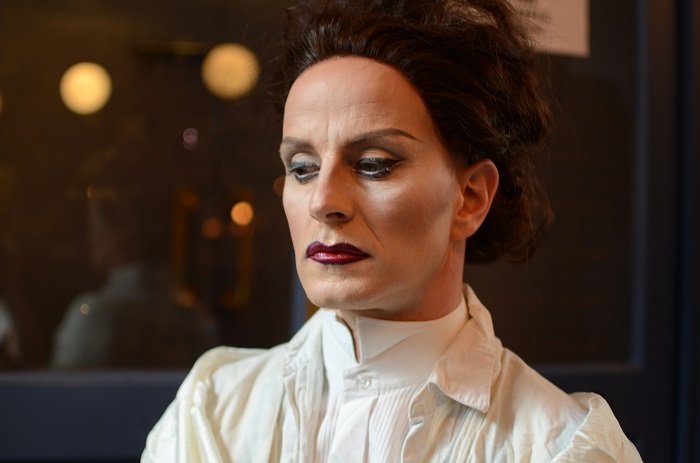 In case you’re kept awake at night worrying there hasn’t been a decent performance of Tennessee Williams’ bizarre yet glorious one-act play Suddenly, Last Summer since Maggie Smith and Richard E Grant tackled it on the small screen in 1993, East London Session Players have revived it in the basement of The Glory. Through the eyes of his family it tells the strange story of the death of Sebastian Venable with a harsh finger of insanity pointed at his cousin who insists she is telling the truth. Directed by Austrian actor-cum-director Giorgio Spiegelfeld, the cast boasts an impressive collection of East London club kid personalities from the classic Princess Julia to the outrageous John Sizzle.

Despite the venue’s website giving a start time of 7pm, Ticketweb and their Facebook 7:30 and the barmen 8pm, the curtain finally lifts at 8:20 in the basement bar of The Glory. The use of space is interesting with video screens and curtains – and a little annoyingly, the audience’s seats – used as moveable partitions around which the story unfolds. Opening with scenes from the film projected onto a screen before the actors take over, the 1959 film version with Elizabeth Taylor and Katherine Hepburn is often running alongside the play with both the film and theatrical characters speaking simultaneously. This motif clearly has a purpose but it is not clear what that is and it seems foolish to compete with the likes of Taylor and Hepburn for the audience’s attention.

Another device is the colour white. From the walls to the masking tape on Sizzle’s high-heeled shoes, Spiegelfeld has gone to great lengths to ensure everything is white down to slapping some matt emulsion on Mrs Holly’s beige mac.  Apart from creating a striking visual with perhaps a nod to the clinical bent of the story, the symbolism of white remains unclear and fails to tie in the images of predation and consumption in Williams’ script.

Dressed as a bridal version of Camila Batmanghelidjh in white turban, wrap and trainers, Jonny Woo (pictured above) plays the bitter and bereaved Violet Venable. To his credit, Woo takes on this character with surprising believability given that he’s sporting tracksuit bottoms and last week’s stubble.  He does “gnarled and bitter” very well and “lost my marbles” even better.  Violet is attended by her secretary Miss Foxhill played by Princess Julia who portrays her as an East London Mrs Overall in a white mantilla.

Catherine, the cousin, is played by Swedish actress Moa Johansson as a hypersexual hysteric. Unfortunately, as the hysterics escalate – notably juxtaposed with the cool and collected Hepburn version projected beside her – Johansson’s dense Scandinavian accent renders her words incomprehensible.  Catharine is sandwiched between her mother and brother played by Sizzle and Little Jimmy Johnsson respectively. For someone so full of life and charisma, Sizzle’s Mrs Holly is disappointingly flat – has she had a lobotomy already?  Johnsson appears to have interpreted “ambitious youngster” as “relentlessly loud” as he shouts every over-acted line while dressed as a trailer park Elvis.

Billed as a 70 minute run-time but ending after 50 with long interludes of the 1959 film I am left wondering what Spiegelfeld was trying to achieve with his version.  With such a collection of creative personalities I was expecting cannibalistic fireworks.  Instead I got a beige mac battered in matt emulsion. Even the programme content is copied verbatim from Wikipedia. So if you’re awake at night waiting for the next decent revival you’re in for a sleepless night. No worry, you’ve got the Taylor version to keep you going.