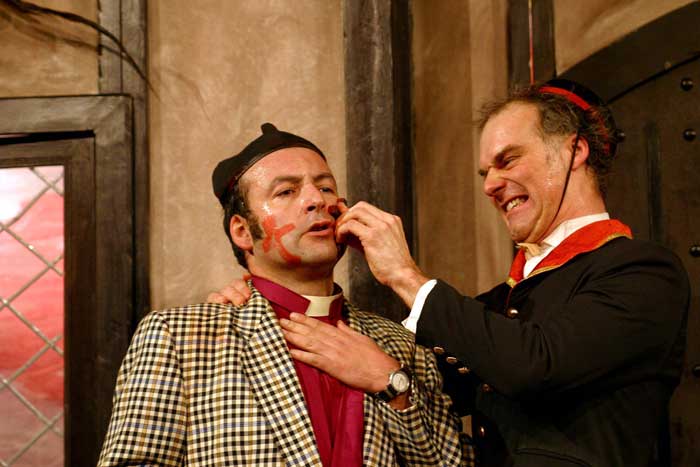 A Spaniard, a German and two Brits walk into a theatre. Whatever the joke is, it can’t be as funny as Spymonkey’s Cooped. 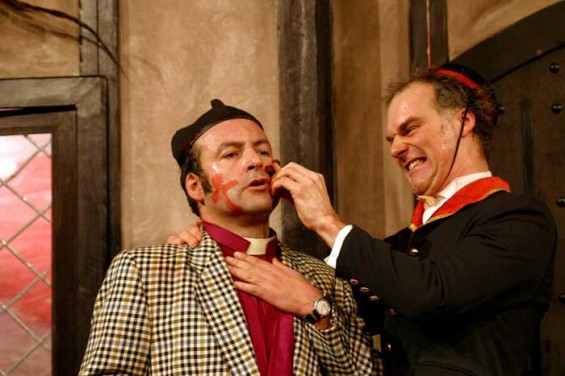 There is no doubt that Spymonkey are a national treasure. Given that the quartet includes a Spaniard and a German amongst its number, maybe that should be an international treasure. Either way, Cooped, a revival of their first major hit, proves exactly why.

Essentially a knockabout comedy wrapped in a farce wrapped in what the cast call “a demented pulp gothic romance”, the storyline often takes a backseat to the genuinely hilarious antics. There are many reasons why this show was a blazing success when it debuted in 2001, not least the badinage, the set design and clever touches from beginning to the very end. Some of this can be attributed to director Cal McCrystal who has also served as the award-winning One Man, Two Guvnors‘s comedy director.

The physical comedy veers from Three Stooges-like slapstick to mini-episodes like the nude ballet dream sequence which ends the first half. Ladies: if you’ve never seen a man hold and strum his tackle like a ukelele, now’s your chance. The back and forth repartee, especially between Stephan Kreiss’ and Aitor Basauri’s multiple characters, is the heartbeat of this show, never letting the pace drop.

A joke-within-a-joke sees both Kreiss and Basauri, as well as co-star Petra Massey, acting the parts of performers acting in Cooped. Kreiss plays the crazed Expressionist actor Udo Keller whose chief role as the manor’s butler sees him aggressively rubbing up against Aitor Bassuri’s soap-opera heart-throb Alfredo Gravés (famous to millions, albeit only in Spain and Paraguay) who plays a solicitor and a bishop with a Mediterranean accent thick enough to use as a doorstop. Massey joins in the fun as Mandy Bandy, the wannabe popstrel playing new-girl-in-town Laura du Lay.

The plot – such as it is – sees du Lay arriving to take up a new position as secretary to Toby Park’s Marsden, the lord of the manor and a handsome devil with hidden depths. No-one is all that they seem and half the fun is seeing each actor taking on new roles. The balanced script allows each of the quartet to shine and connect with the audience in their own way. Kreiss is all pantomime villein aiming sly winks, tongue-pokes and even gunshots at the punters while Bassuri seeks pity by constantly touching up his toupee or playing episodes from his telenovela past.

The set design is a marvel in itself. Cheap props, from the hobby horses standing in for the real thing to “stairs” with only two steps, bring some of the biggest laughs of the show. Kreiss’ utterly superfluous concerto using combined pings from empty bottles and the nearby lift button is wonderful and highlights just how many crazy ideas are in this madcap marvel of a show.