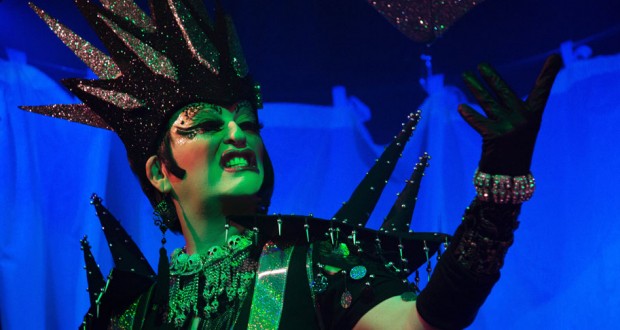 About three years ago, Stuart Saint penned a scabrously adult version of the Whittington saga for Leicester Square Theatre’s snug basement room where they have been milking his Dick ever since for a loyal catchment.

This year, he announced in a pre-show introduction, more money and more filth has been thrown at the production – and to good effect – Sleeping Booty has an outstanding cast who may actually be getting paid, remarkably solid scenery and some decent costumes. These include, for Miss Dusty ‘O’, an eight-foot outfit designed by Twiggy (Twiggy Birmingham rather than the M&S one) with a head-dress modelled on the top of the Shard which has to scoop, sometimes successfully, under a number of seven foot arches.

Unusually for an adult and cabaret-influenced show, Booty has the texture of a full-scale pantomime and neither the characters nor the plot are any sillier than you’ll see this Christmas at Hackney Empire or Wimbledon. Because the language is so solidly profane, it does rob pantomime of the deliciousness of the two-tier joke where adults and children get something different out of the same gag. Here, the entendres are pretty much single. There’s an interesting mix of traditional pantomime routines, filth of course but often restrained to allow for some very decent song stylings.  The gags are marginally less topical than we’d have expected: Operation Yewtree and Cliff Richard are already a bit stale on the comedy circuit, but the routine with the blow-up doll is hilarious.

The whole cast brings tremendous aptitude and energy to the piece without over-selling it: everyone breaks the fourth wall all the time, but Paula Masterton’s Aberdonian Fairy Muff has the audience with her from the get-go, and occasionally releases her inner cabaret diva with some stunning vocals.

Casting an ostensibly real-live heterosexual as Prince Willie-Wontie is a stroke of genius when Leon Scott’s Shakespearean experience and classically fruited voice give it such charm and style, as well as out-camping the gayers at every available opportunity. His Casting Call Pro profile says he’ll perform nude, which seems a missed opportunity for the producers of Booty, although the spandex speedos left little to the imagination.

At the risk of making a list and checking it twice, the rest of the cast all deserve highest praise: Rachel Torn plays Evil Mangelina’s sidekick as a foul-mouthed woodland creature with the buck teeth and voice of Olivia Colman – was that even deliberate? – Alice Marshall’s streetwise Booty raps convincingly and Alexander Beck plays a fistful of great stock characters with only momentary lapses of concentration.

With so much talent in the supporting roles, it’s harder for the star to shine brighter.  It’s also difficult to assess the work of Miss Dusty ‘O’ as Evil Mangelina without mentioning her recent unhappy context of the closure of Soho landmark Madame JoJo’s where she has reigned over the amazing Trannyshack nights for many years. Fans of her immaculately-styled silent film heroine glamour may be momentarily disappointed by her appearance in Booty as a Wicked Queen visually veering between Liza and Cher, and scripted with more traditional pantomime dame poses and tamer remarks than her immense and inventive talents usually deliver. Perhaps she’ll develop the persona during the run.  And by ‘develop’, we mean ‘hijack’.

In the meantime, there’s much to enjoy and we predict this may well be the best of the fringe pantos this season. Long run, until late January, so give it a go.