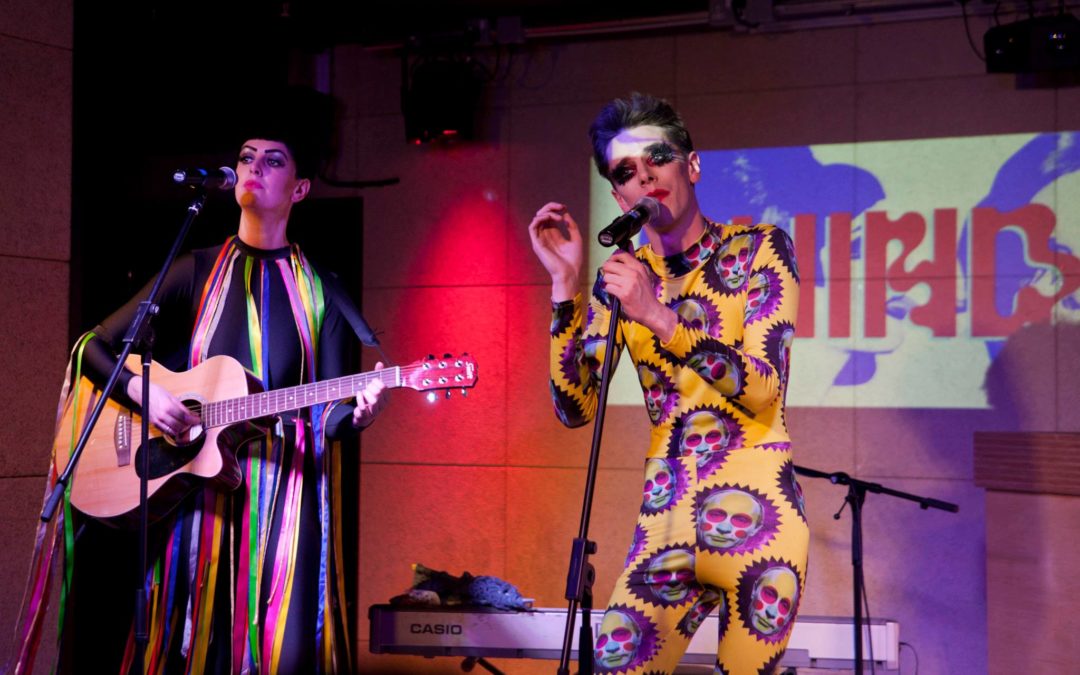 Get yourself down to Shoreditch for a bit of a Shindig with some fellow weirdos. 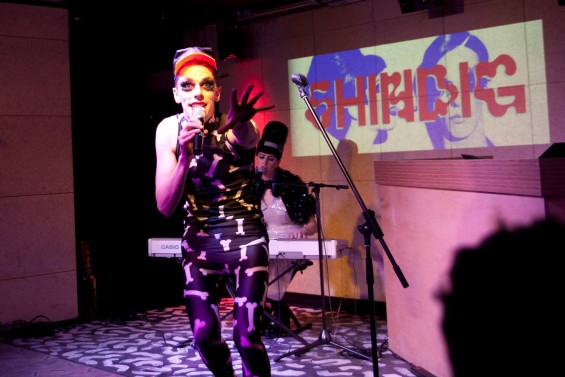 Cabaret fans love a good shindig, and now they have their very own one at the hipster enclave that is Shoreditch’s the Ace Hotel.

Self-proclaimed as ‘a night of performance for weirdos and their friends’, this Shindig is a motley collection of wünderfreaks, expertly compèred by that beacon of sartorial excellence Georgeois Bourgeois and his sidekick and mistress of the beehive, Maurice Maurice. The line-up will change each month but the aim is to feature new acts and established ones trying out new material; as a taste of what is to come, its debut outing gave us a diverse enough offering to savour encompassing magic, music and comedy all performed under the beady-eyed gaze of “Mad Aunt Pam On the Door” as she presides over the incoming crowd.

There’s certainly an eclectic mix here. Magician Nathan Pendleton performs card tricks in front of a projection of his thirteen-year-old self as a magician in the making. Scottee monologued from a high chair wearing not much apart from a brown robe. Fig in a Wig’s Rachel Porter brought her own brand of comedy to the world of fruit and veg, discussing a selection of meaningless dates whilst eating her way through a box of dried ones left over from Christmas and carving a penguin out of an aubergine. And if the audience found that absurd, the bar was raised with Octavia’s pan pipe rendition of Prince’s Purple Rain in the second half.

The high point of the evening is tweeded duo Lorraine Bowen and Karina Townsend. As The Chalkwell Ladies Drum ‘n’ Bass League, their mission is nothing less than to prove that hip hop truly was invented in Horsham. With keyboards marked property of the Southend College of Further Entertainment, Edna Regis (Bowen) and Susan Blairgowrie (Townsend) bring music, movement and menopause together in perfect harmony, getting everyone up on their feet for a punch the air aerobic routine that wouldn’t have looked out of place at a West Sussex Community Centre.  Waving a placard saying “Make Some Flippin’ Noise” and stripping off a faux-Chanel jacket to reveal a surprisingly youthful physique, these are two mid-life ravers to look out for on the cabaret circuit.

The hosts themselves are in fine fettle as they roll out some gems from the Bourgeois and Maurice songbook. Pulled from their latest album, Social Networks (Makes Me Feel Like Shit Sometimes) and Song For A Friend with its chorus of “Your boyfriend is a twat” satisfyingly hit the spot as two experiences with which we can all relate. Renowned for his wardrobe as much as his warbling, Bourgeois didn’t disappoint with a Putin-styled onesie putting in a guest appearance in the second half, adorned Andy Warhol soupcan-style with the heavily made-up face of everyone’s favourite Russian leader.  Meanwhile, Maurice’s one-minute Vagina Monologues are pure hilarity. Anyone who puts a microphone between her legs whilst Margaret Thatcher does her “the lady’s not for turning” speech and Katy Perry sings “you’re gonna hear me roar”, knows how to walk the path between clever and silly.

Shindig is a fun testing ground for new material but there’s more than cabaret here: after the show, there’s a club night, with 12 Inches Of Pleasure spinning the tunes from 10.30 pm.  Shindig?  It’s definitely a good old East End knees-up.

The next Shindig is on May 29.

Bourgeois & Maurice’s reveal the truth behind Mother’s Day: ” Ignore it, and lose it forever. Look what happened to Pervy Uncle Day.”

Five Bourgeois & Maurice Videos To See Before You Die