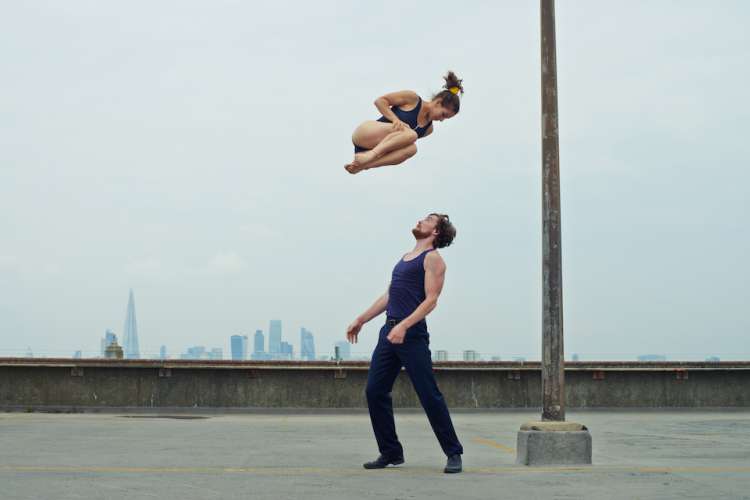 Every summer the third year students of the National Centre for Circus Arts (previously known as Circus Space) showcase their skills in an ensemble show featuring everyone who graduates that year, all condensed into a single hour. Such an endeavour presents a certain number of difficulties: how to make sure everyone gets their moment when there are so many performers and so little time? How to present a show that is more than a string of short individual performances when not all students specialise in the same discipline and they all master different skills? How to make them all fit in the same stage, even? All those issue are ever-present during Polymer and yet the show makes the most of them, its very title an ode to the mixing and bonding of different materials to achieve greater strength.

Polymer is directed by Lina Johansson from Mimbre, a local and international circus and street theatre company that prides itself on promoting a strong image of women, a very welcome attitude on a scene where lots of circus shows feature few women and sometimes limit them to stereotypical roles (as in Traces, Limbo, Scotch & Soda to name only a few). The show also benefits from a very poetic aesthetic continuity : it opens up on a set made of strings and ropes that remain present in different forms throughout and runs like a nautical metaphor. The opening track by American post-rock band Explosions in the sky gives the tone : joyful, simple, quietly ecstatic yet never rushed.

In that regard Polymer is quite refreshing in that it doesn’t take itself too seriously. Last year’s graduate show Hop was very solemn, very conceptual and illustrative of a circus that has become allergic to itself, that is constructed against what it used to be, against the cheap thrills and the rhinestones and where no one does anything impressive because that would be too obvious, or even vulgar. Except that when faced with circus performers you do want them to do impressive tricks because well, mastery of the ridiculously hard is at the core of circus. Take it away and you’re left with a mixture of dance and physical theatre. Polymer sometimes does fall into that pattern, there are no big scary drops on the chinese pole, or anything that feels truly death defying. And there are episodes when performers tangle themselves into strings (but what does it mean?) or walk on a held up Cyr wheel for what feels like no particular reason.

And yet the show finds itself in a space that is free from jazz hands and glitter but filled with a playfulness reminiscent of something like A Simple Space where performers compete, support and fall on each other. There are moments that are truly beautiful and some performers do steal the show, one of the most prominent being Lil Rice who delivers a beautiful Cyr wheel performance whilst simultaneously singing and hereby suspending time altogether. Due to the nature of the show it is impossible to name all the performers and mention their individual strengths. However as they all graduate we will hopefully get to see more of their solo work very soon, which is certainly something to look forward to. Polymer in that aspect manages to be a show on its own right whilst giving a glimpse of the potential of all its individual parts.