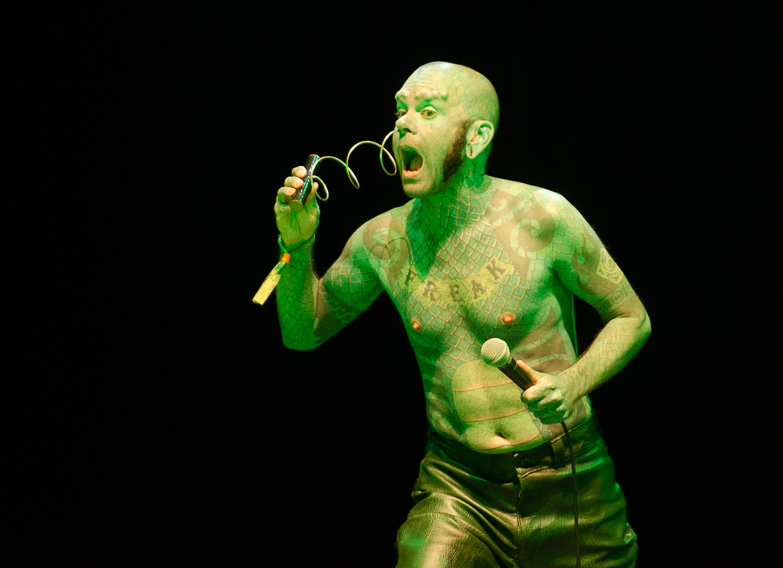 Officially down as ‘crazy shit’ on the backstage scheduling board, the Monster Sideshow proudly impress upon us their “freak” status, and watch us squirm and gasp in awe at their death defying stunts. 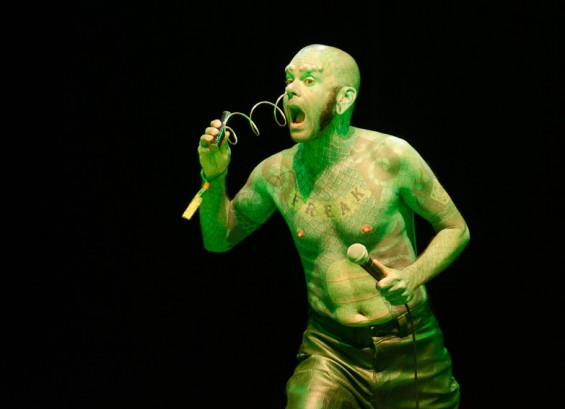 No trick of the light here, The Lizardman really is green. And wait till you see his tongue… IMAGE: Charles Gervais

Harking back to the history of the circus midway, the Monster Sideshow is here to show us the extremes that the human body can take.  In the black-out of the Circus Big Top at Glastonbury Festival, a dark carnival organ begins to play, accompanied by sounds of wicked laughter…

Bursting onto the stage in a rock and roll frenzy of whip-cracking are tonight’s host, The Space Cowboy, and the troupe’s other attractions, Zoë L’Amour, Aerial Manx, and the body-modded Lizardman.  According to Ripley’s Believe it or Not, Lizardman (aka Erik Sprague) is “the strangest man to ever live”, with his 700 hours worth of tattooing, filed teeth, teflon graft eyebrow ridges and split tongue.  He also revels in the title “freak” and, proving that freakism sits deeper than looks alone, proceeds to wind a cranial corkscrew through his face.

All of tonight’s performers are Guiness World Record holders; the elegantly corseted “Princess of Pain”, Zoe L’Amour, treats us to a balancing act fraught with knife edged danger, Space Cowboy precariously juggles a live chainsaw, and Aerial Manx is the worlds only acrobatic sword swallower.  I’m playing the acts down, because I don’t want to give away too much of their spectacle – the shock at their daring is part of what makes tonight’s show so electric.

We have comedy moments as well, such as in the Lizardman’s devilish delight at being handed a live crossbow, and L’Amour’s angle-grinding which, while remaining kid-appropriate, offers the dirty-minded among us plenty of food for thought.

These are showmen, and the Upworthy style of introduction is back in fashion. We’re here to have our Mind Blown, to Disbelieve Our Eyes, and most of all, to Not Try This At Home.

The finalé harnesses elements of danger from all the acts that have preceded it and pushes them to a new level, as Space Cowboy is slowly hoisted above the stage by his ankles for an inverted sword-swallow that draws on the assistance of his entire crew, and has me sharing squeals and winces with the Canadian lady next to me, unable to tear my eyes away.

The Monster Sideshow is not only a collection of crème de la crème sideshow artists, but also a very well paced and produced variety show, that brings a new meaning to the phrase, “suffer for your art”.