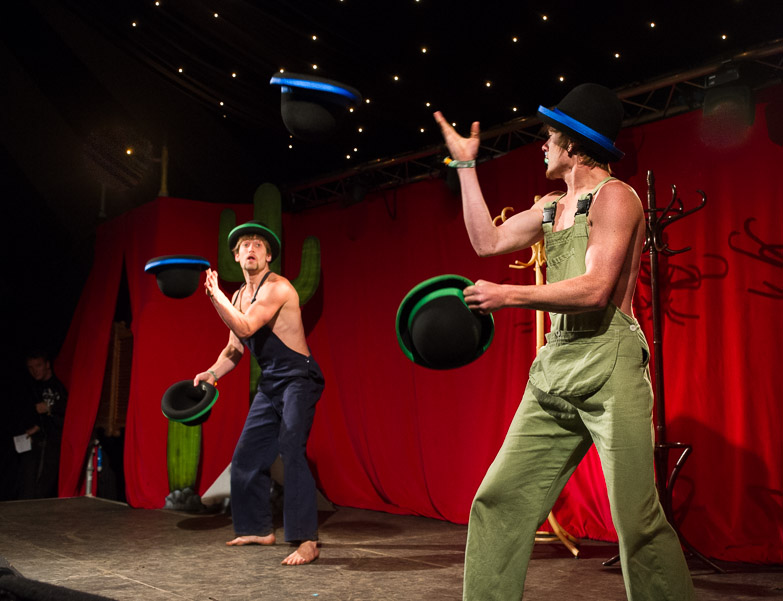 Time flies when you’re at a good cabaret, and Mavericks is one of the best.  At over £200 a ticket it should be…

Yes, Mavericks is Glastonbury Festival’s late night cabaret show, transforming the tent which, by day, presents the Poetry & Words events.  Their programme provides hand-picked cabaret from the talent of the Theatre & Circus Fields, between midnight and 3am each festival day.

I dutifully followed the instructions to reserve one of the seats at the 8 tables in front of the stage, by tweeting the colour of pants I would be wearing on the day.  I was a little disappointed not to be checked, but I got my seat anyway, amid several of the Circus Kathmandu performers who were there to support their colleagues opening up the Saturday nights’ proceedings.

Tonight’s host was the ultra-laid back David Id of the Splott Brothers, clearly enjoying being a part of the party as much as all the other festival-goers.  Members of the audience were just as keen to get up onstage and surprise the acts as be surprised by them, and the pair who first offered their drug stash to unsettled young comedian Elliot Steel, and then leapt up to replace the knife thrower’s assistant during Gamble & Wells “More Danger!” act, were awarded free shots from the tantalising performers’ bar at the side of the stage.

Before we positioned ourselves in front of the stage, however, our chairs and tables were arranged around a dance-floor to allow room for Bijay C‘s dynamic meteor spinning (otherwise known as “two buckets on a rope”, that has similar roots to poi, staff, and nunchuck performance).  The young Nepali performer’s jubilant delight and martial skill certainly won over his first UK cabaret audience, and his co-star Renu made a nice contrast appearing next with her beatific contortion routine.

Dan the Hat was up next, teasing us in his charismatic salesman-type way in the build up of his object manipulation act.  He was lucky enough to be the first of the three hat-juggling spots tonight because, after the superbly timed and witty Dueling Banjos from Harry Clements and Paddy McCrea, even the beautiful breakdancing torso of BRIEFS’s Louis Biggs couldn’t compete.

There was a lot of impressive object manipulation on the stage tonight, from Rod Laver‘s grotesque facial contortions as he juggles ping-pong balls from his mouth, through a cheeky number from Donald Grant that taunts us again and again with an almost-lifted kilt as he spins and tosses his diabolos, to Sam Sebastian‘s adults-only balloon modelling, and the unique “short rope” from Grant Goldie that melds mime, puppetry, clowning and a little piece of rope into a wonderfully inventive act.

Emily B gives us a quirky confessional monologue that drives the energy of her hula-hoop routine into an embrace of her “true circular nature”, suggestive of analogous journeys toward acceptance of varied sexualities, while George Egg offers a strange yet mesmerising kind of burlesque.

The variety on offer over the three hours is splendid and I find I’ve gone from “I’ll just stick around for an hour then bed” to “ooh, what’s on next”.  The bill is so packed that Id’s role is little more than making introductions (and drinks for departing performers), as we see a frothy can-can number from the Ooh-La-Las, stand-up from the aptly hairy-hippie-vegan Alistair Beckett-King, and a Play Your Cards Right styled game of Beard or No Beard, presented by Pete Dobbin.

And there is, of course, music. The Sirens lend unexpected maritime links to classic cabaret numbers, dressed as part mermaid, part pirate wench and part ship, with ethereal rolling trills and 1940s style harmonies complementing their musicianship.  Tourettes Hero and Captain Hotknives offer a taste of something completely outside the neurological norm, and I want to see more.  Fez Fa’anana of BRIEFS gives us a lovely lip-sync to a surprisingly lewd little number, and the night is closed with Phil Kay‘s clever musical improvisation, summing up our evening and offering philosophical titbits.

While there’s certainly no chance of getting round all the cabaret acts Glastonbury has to offer, a night (or three) at Mavericks is going to get you the best bits.  Now all you have to do is get in that phone queue and wait for tickets to go on sale.