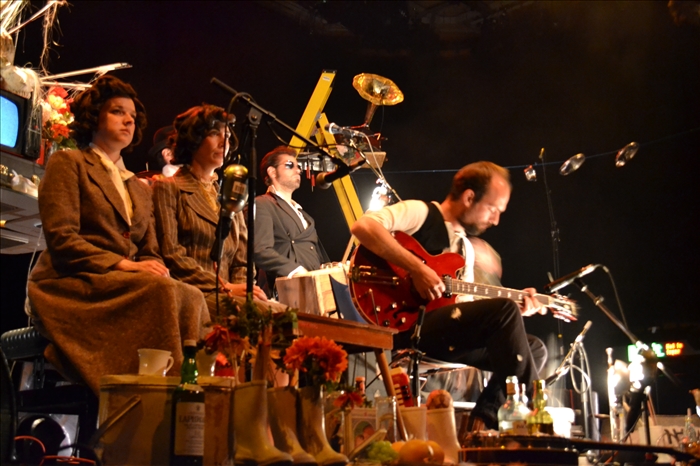 Gravel-voiced singer Tom Waits’ magnificent music has built up a cult following and how the self-styled “cabaret tribute” L’Orchestre d’Hommes-Orchestres interpret his opus in a highly original manner. 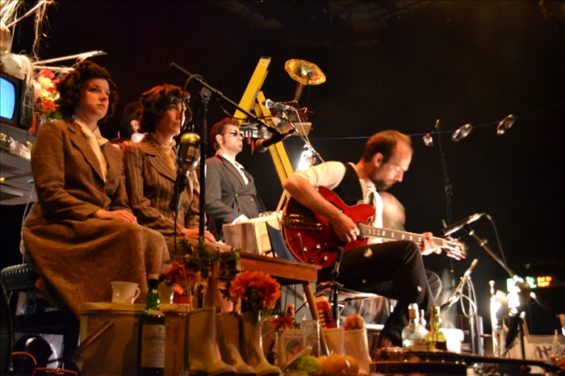 The six piece group L’Orchestre d’Hommes-Orchestres from Quebec certainly raise questions with their approach to Tom Waits’ back catalogue. As a huge fan of the gravelly-voiced one’s works, I had certain trepidation over seeing how possibly his kookiest set of fans would be interpreting his works.

The idea of seeing some people play his music is definitely appealing though one is left wondering what the point of it was – do his need yet another tribute act? Happily, a sheer energetic madness that erupts within seconds of the six piece L’Orchestre d’Hommes-Orchestres arriving on stage wipes these thoughts away.

Over the course of the hour-and-a-half, around 100 instruments are used to bring Waits’ songs to life; frankly, there may have been even more. A suitcase is used for a bass drum; a wooden spoon rattled between teeth adds a syncopated rhythm; fizzing candy adds a scratchy analogue record feel; dominos, bottles, pipettes, pasta, oranges, one-string-basses, guitars, violins…. even a pram are all given their own musical dimensions. I’ve often listened to Tom Waits and thought that he sounds like a mad prophet rattling around in an old tin shed filled with hammers and tea pots – now seeing a mousetrap clicked in front of a microphone I feel like maybe I’m getting a glimpse of what his studio might really look like.

Waits is known for encouraging other artists to use his music and re-work it. Bruce Springsteen, The Eagles and Rod Stewart have all covered his tracks as have countless others. Waits himself has contributed vocals to a plethora of tracks by other artists, many of which he’s received no payment for. He has also constantly explored different styles and gravitated towards less common instruments, saying “Your hands are like dogs, going to the same places they’ve been. You have to be careful when playing is no longer in the mind but in the fingers, going to happy places. You have to break them of their habits or you don’t explore; you only play what is confident and pleasing. I’m learning to break those habits by playing instruments I know absolutely nothing about, like a bassoon or a waterphone.” With all this in mind, there’s no doubt that he would be pleased by what this show is trying to do, by deconstructing his songs and putting them back together in an even more chaotic fashion than they were originally recorded.

Throughout the show, just as much attention is given to the physicality of the words as the sounds and rhythms. A particular highlight of the show is the orchestra’s surreal yet literal take on Chocolate Jesus: one of the two female performers eats a huge bar of chocolate, while the other looks on with blatant envy. Elsewhere a beat is tapped out by smacking a tin with a pair of walking boots, and four guys sing vocal harmonies while inside an empty picture frame they hold up to enclose them. All six members of the band then crawl over each other, play parts of each other’s bodies and hold glasses and cigarettes for them all to use in turn.

The spellbinding visual and sonic originality of this ensemble’s approach is encapsulated in a scene which sees a beat established through one person wearing a helmet with a golf club attached while another musician has a bell on their head that smashes into a frying pan held by two others who high-five, a process which repeats every few seconds over a five minute song.

A furious finale sees the stage utterly destroyed as the orchestra leaves noticeably panting to a sight and sound not of their making, namely a double standing ovation which is a well-deserved tribute from the audience to a brilliant show which oozes skill, invention and audacity throughout. Tom Waits fans looking to experience this take on his back catalogue should note that they will beat the Southbank Centre every night until Sunday 7th July.