Review: The Lady Boys Of Bangkok’s Beauties And The Beats 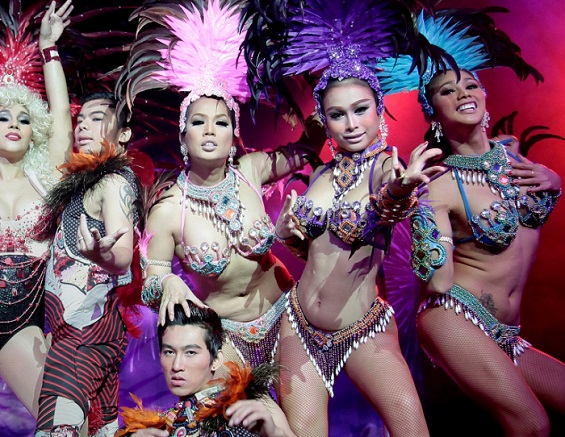 Beauties and the Beats is an enjoyable, visually exciting singalong to kick off a night out, but it’s a largely shallow offering.

Beauties and the Beats is an enjoyable, visually exciting singalong to kick off a night out, but it’s a largely shallow offering.

Half promenade, half pop concert, The Lady Boys of Bangkok’s latest production Beauties and the Beats paints a thick, glittery coat of sequins, feel good factor and infectious pop anthems over a dated and sometimes troubling sideshow spectacle.

Now in their 17th season, Lady Boys first appeared at the Edinburgh Fringe in 2008 and have toured the UK non-stop ever since. The latest show is held in a 400-seater tent, filled with the enticing smell of “authentic” Thai food and strategically placed souvenir stalls flogging masks, boas and false eyelashes. The star attraction is the chorus line of youthful, beautiful – and to all appearances female – Thai performers, proudly announced as “all male” before they are revealed.

“‘Ladyboys’ (Kathoey) are widely accepted as a third gender in Thailand, but do not enjoy equal rights. A number of documentaries about British tourists who seek out kathoey for sexual services makes the use of ‘Lady Boy’ (also used as a derogatory term to mock those undergoing gender transformation, or as a homophobic slur) in the name of a UK touring show, questionable to me, and clearly to some others, locally in Brighton and on feminist blog The F Word. Other reviews of previous LBB shows have described it as “disturbing subversion reminiscent of a Victorian freak show” and “jaw-droppingly bad taste”. So is the show an empowering celebration of womanhood in every form, or an exploitative novelty attraction designed to titillate?

At its core, Lady Boys is playful and light-hearted, with a lively and decade-traversing soundtrack encompassing the likes of Grease, Katy Perry and Frozen. The chorus line of feminine performers is unquestionably stunning and almost painfully beautiful in some cases. On closer inspection, however, flaws are revealed. During some numbers there are fixed, vacant smiles, periods of half hearted, unsynchronised choreography, and in some cases no apparent attempt to appear remotely enthused. The cast perform two of these demanding shows per day and tour constantly – and unfortunately it shows. The selection of dated, albeit crowd-pleasing up-tempo routines, poor lipsyncing and gaudy outfits often reduces it to a distinctly average cruise ship showcase.

The one standout injection of charisma is the token fuller-figured Ole, who performs a number of humorous solo routines. Her final number, a well observed Tina Turner impersonation, is an enjoyable, uplifting highlight. Aside from the Lady Boys themselves, a smaller group of performers play conventional male roles including a Frankie Valli and the Four Seasons tribute and iconic Village People characters; while hardly groundbreaking concepts, these additions have a certain charm.

The costumes are such a key element that a fashion show takes place during the first half. At their best they are breathtaking, with beautiful capes, intricate cage corsets and sparkling Thai headdresses to die for, but at their worst they look like they’ve been embellished by an enthusiastic seven-year-old with a glue gun.

For a show appealing to hen parties on their website, and with a predominantly female audience on this occasion, certain sections seem confused and poorly judged. Dancing to All About That Bass, the incredibly slim and toned showgirls lipsync to lyrics like “skinny bitches” and “I ain’t no size 2” as Ole makes a last minute appearance in a fat suit. Comedy solo I Ain’t Pregnant, I’m Just Fat receives a noticeably muted response compared to previous routines, and after gradually putting some uncomfortable husbands and boyfriends at ease with the comedic numbers and contagious dance party atmosphere, to the point where some get up to dance and participate, they bring a sacrificial lamb up onstage to poke fun at penis size.

Ultimately, Beauties and the Beats projects a rather confused message. The inclusion of the diminutive Trevor Jones – undoubtedly a talented, charismatic performer – does nothing to dispel the novelty vibe. He is the only performer to come close to full nudity, which seems gratuitous and designed to satisfy curiosity. At one point he appears on stage with a sign reading “Size Doesn’t Matter”, but this is spoiled by It’s a Tiny Tiny World playing in the background.

As the ecstatic applause for the Village People finale dies away, I wonder if the show has the power to inspire respect by challenging preconceptions and prejudice, or to provoke thought about how artificial and easily challenged society’s concept of what being a woman is. “Do you think they get all their bits cut off?” a woman asks her husband. “I almost got a semi. Almost,” he jokes. These and other similar comments echoing as I leave the tent make me less optimistic.

Beauties and the Beats is an enjoyable, visually exciting singalong to kick off a night out, but it’s a largely shallow offering which ultimately fails to do justice to its unique and exquisite cast.