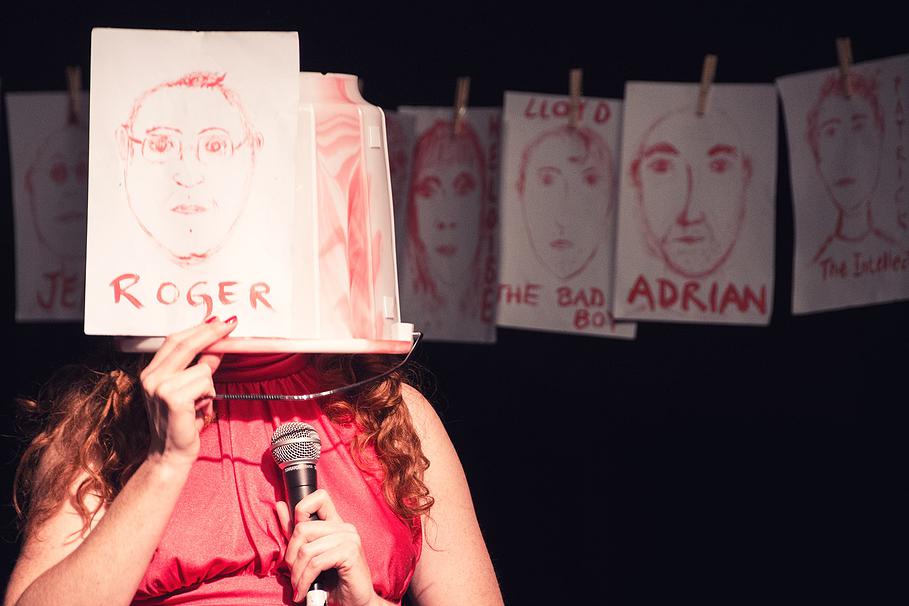 Audience interaction is a tricky part of any show. Rebecca Wigmore checks out one artist who, through the media of felt-tip pens and electrical tape, asks the audience to open their hearts and their minds. 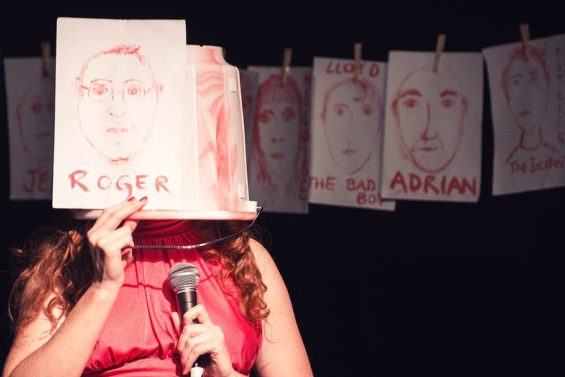 Catherine Hoffman’s Glory Days takes the audience back to their first loves.

The small, dark stage of the Camden People’s Theatre is haunted by faces. There are maybe fifty or so, sketched quickly with those thick red Berol pens they used to hand out at school. It’s a good job then that Catherine Hoffmann, with her red column dress and shocking pink eyelids is such a commanding presence, because if your gaze wandered from the stage, you might finding yourself staring into the felt-tipped eyes of your neighbour’s lost love.

Glory Days is an experimental song cycle concerned with the communal experience of passion and the audience are expected to keep their end of the bargain. In memory of the god Osiris, who was ripped into fourteen pieces as the result of an ancient Egyptian love triangle, fourteen audience members are required to dash off a portrait of a lost love. Hoffman harvests these pictures and places them on thin red strips of electrical tape that dangle from the ceiling — an excellent viscera substitute for the goddess on a budget. The British are not used to being elevated to mythic status. It’s both exhilarating and awkward, a gift at the top of the show.

Glimpses into our neighbours’ romantic life aside, Glory Days is a mix of found monologues and song, laying bare the telling details of strangers’ failed relationships. Hoffmann demonstrates a facility with accents and gesture but the show only truly comes alive when she’s singing. Although the sight of a ukelele on an ironing board is always a cause for immediate alarm, the music never descends into twee, as Hoffmann primarily relies on the vocal loops she creates live onstage. Her voice is full and gorgeous but the more bestial and primal her performance becomes, the more thrillingly alive the work feels. As her subjects’ words are looped, pitch-shifted and sculpted into abstraction, these relatively mundane stories of romantic loss become something urgent and universal. Even Hoffmann’s own story of romantic love lost and found is dwarfed by the intensity of her soundscapes.

Not all the audience participation works however – there’s a strange moment where Hoffmann asks us to contribute spare change to help her create an effect, and overexcited audience members hopped up on participation, took the opportunity to pelt the performer with shrapnel. This oddly violent interlude felt somewhat counter to the generous and communal spirit of the show but the subsequent use of the coins in the performance — which I won’t spoil here — was something special, both magical and unsettling. Hoffmann is such a striking and compelling performer, it was a too-rare pleasure to see her cut loose physically. Gods know what she’d be like if she truly let madness reign.