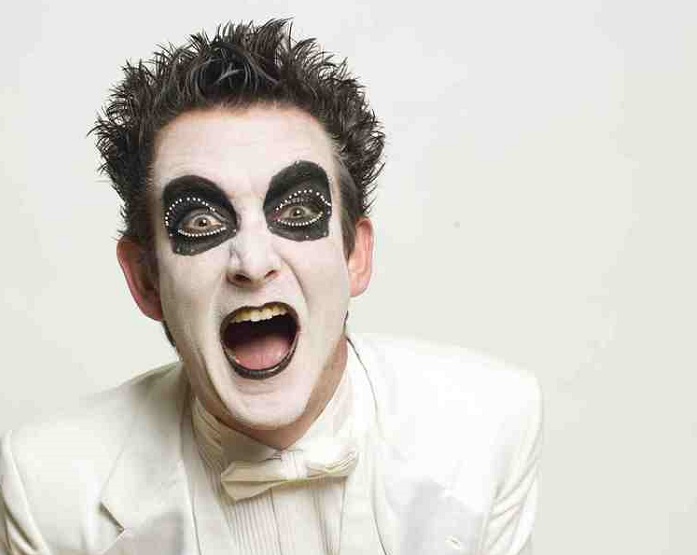 The Udderbelly late-night standard makes a disappointing return to the big purple tent.

The Udderbelly late-night standard makes a disappointing return to the big purple tent.

The Udderbelly Festival is back and with it comes their weekly cabaret showcase, Friday Night Freaks. In its sixth year, Freaks promises the “most twisted, rude, shocking and just downright bizarre comedy and cabaret acts”. A long-time dedicatee of The Udderbelly and fan of the show, I took myself to the performance last week and witnessed the devolution of what was once a fabulous concept.

In its current format, the acts face considerable obstacles before the doors have even opened. Pushed back to a new time of 22:45 (from 21:00), freak enthusiasts are reduced to yawning end-of-the-working-week zombies with too much booze on board. And there aren’t many – even the usher on the door jokes at the paucity of spectators as we file in to fill the giant purple cow to a third of its capacity. Every expense has been spared on production with just a single microphone and static lighting illuminating a stark stage and whatever props the acts have brought along.

Faced with a diminutive, exhausted, tipsy audience and no production, it’s no wonder the number of acts has also dwindled. Previously one could expect a headliner like Miss Behave to steer a six or eight act show over two hours. Now the compere, tonight Desmond O’Connor (above), only has four acts to introduce over 80 minutes including an interval. Whoever thought an hour-long show needs a 20 minute interval ought to be strung up and played the seating music on a loop – an endless selection of Romanian accordion classics normally heard live on late-night tubes – in return for loose change.

First off is American comedian and self-confessed abortion survivor Scott Capurro who seems intent on pushing as many race, religion and sexuality buttons as he can without adding much context. From the prophet Muhammad to AIDS with a “Nigger” reference thrown in for added shock-value, Capurro’s shtick hasn’t changed since his Edinburgh Fringe Festival performance in 2008. He has some hilarious lines and his pacy, camp delivery is fun to watch but he moves haphazardly from joke to joke seemingly without any direction in mind.

Storm Hooper is a Latvian hula burlesque performer who, dressed a mouse for reasons best known to herself, tries to look alluring as she spins hula hoops on her limbs in gymnastic positions while her labia poke out the side of her costume. Hula hooping is interesting for about five minutes no matter what position you’re doing it in and other than increasing the number of hoops there isn’t really anywhere for the act to go. I’m not a burlesque purist but this is not burlesque – the occasionally licking of a hoop or the wink of a passing labium do not count.

Following the wholly unnecessary interval is Lolo Brow. O’Connor jokes that “alternative burlesque” is the good stuff and she sure is. Dressed as Nigella Lawson she lip-synchs to a track of Nigella quotes about the heady aroma of her pussy to her enjoyment of clam flesh. Using phallic kitchen props and divesting with each dish, Brow moulds the audience like the buttercream spattered over her nipples. Droll, snappy and just naughty enough, Brow pops the cherry on the cake and steals the show.

Last up is John Roberston who gives us a sample of his show The Dark Room, a live action video game audience members can play for prizes. Remember those choose-your-own-adventure books when you were a kid? This is the same concept but with Robertson shouting abuse at Brian Blessed volume throughout. There is some clever word play as he crushes the hopes and dreams of hecklers but he loses control of the crowd before a clumsy and abrupt plug of his show.

By this stage most of the audience have realised that they have 20 minutes to catch the last tube and dash for the exits before O’Connor rounds up the night with rounds of applause for various people. Friday Night Freaks is a great concept and used to be a fabulous show. With the new bastardised format the performers are doomed before they begin. At £15.50 a ticket I’d give it a miss in favour of an earlier show that offers a more realised experience without the threat of a tedious night bus home.