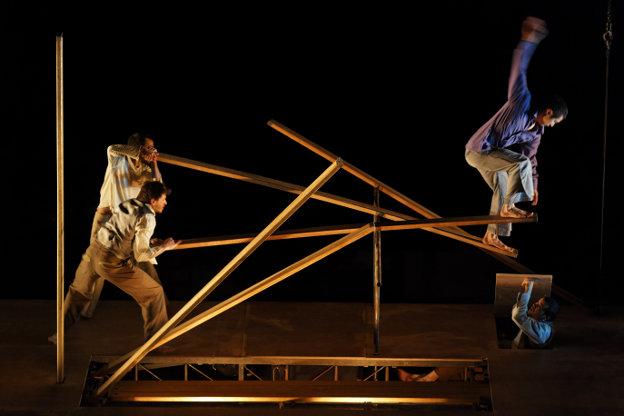 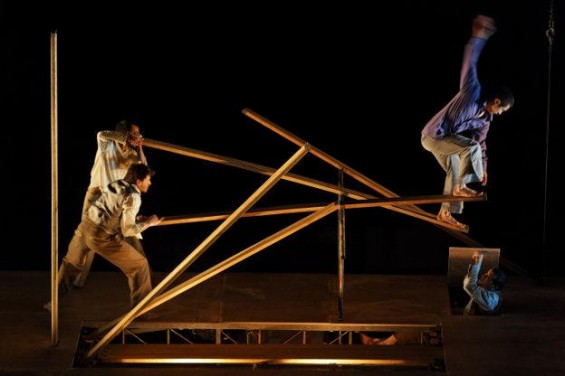 Du Goudron Et Des Plumes (or tar and feathers for “les anglais”) is the latest project from circus visionary Mathurin Bolze shown at the Barbican as part of the ongoing International Mime festival. This is an immense show defiantly mixing physical theatre, acrobatics and aerial artistry involving a specially constructed piece of apparatus that loosely conveys the feeling of a ship floating through the sky. One thing is for sure: in a world of increasing repetition, reformatting and outright plagiarism, this is a show that sails off into the wind on it’s own trajectory.

The rocking and rolling of the ship, combined with the stark lighting and black background create a hypnotic, trance-like fusion of different ideas. At some points there are moments of calm that drift through ambience, only to fall apart catastrophically into violent choreography. Literal and physical destruction leaves the stage covered in debris and the theatre hangs heavy with uncertainty and expectation.

Are these ship-wrecked survivors floating on the sea of life? Or the last remaining corner of humanity stranded together after some great catastrophe? Are they the ghosts of past lives or a vision of the future? Without dialogue, all these possibilities seam to reveal themselves and be equally valid. With grace and music the world is deconstructed and rebuilt anew. Disconnected performers mirror each other in a world that lacks time or space.

At some points I’m reminded of Fuerzabruta (coming back to the Roundhouse in December), both through the physical staging, lack of obvious linear narrative and the unrestrained energy the five performers exhibit here. But there is far more desolation and violence. It is far bleaker. Yet there is also redemption: though the “crew” face obstacles and a world that continually threatens to destroy them, they also survive it through the spirit of collectivism.

The show works by a series of individual pieces that are brought together often at breakneck speed through clever choreography. The circus is bold and fearless, at one point as the pandemonium builds to a crisis a girl grabs a rope and flings herself into the air. A lone trumpet holds a sustained battle call and though I have no idea how or why these figures have been brought together, I am utterly captivated by this image.

This is a 75-minute show, and the athleticism of the performers is impressive; at the final moments they appear drained and exhilarated. I too feel like I have done a work out of equal proportion, the back of my seat untouched. I was asked recently what relevance does mime have in the 21st century. With Du Goudron Et Des Plumes, Bolze has given his answer; this is a show packed with more fear, savagery and beauty than most conventional theatre could dream of. In the deafening thunder of post-modernism, without fixed reference points and lacking coherence this chaotic, discordant expression seems to make mime more relevant than ever.