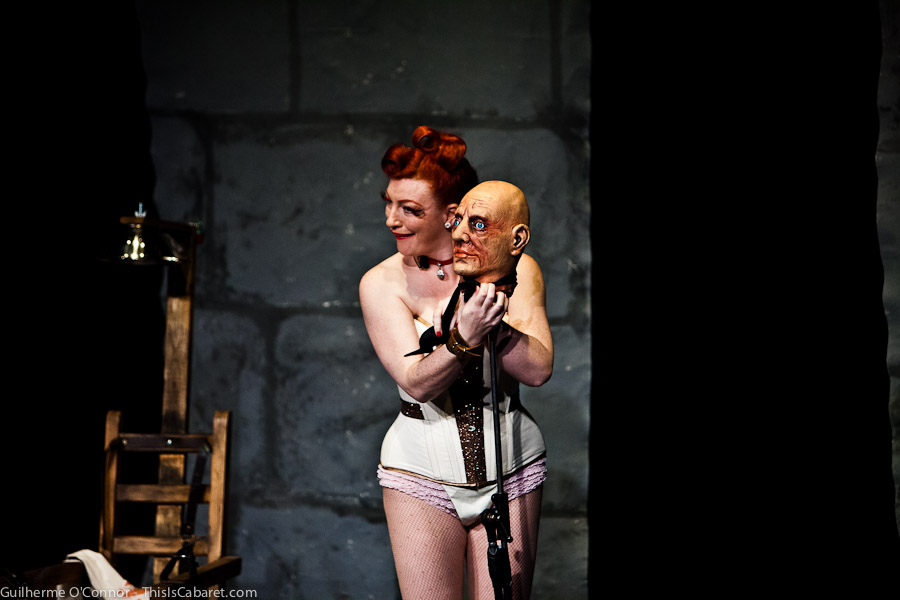 Can a show turn you into a psychopath, or just reveal your darker side? The answer lies inside the prison cell of murderous belle Crimson Skye in Death Row Diva, an edgy political satire that will make you laugh like a maniac. Perhaps literally.

The one-woman show is a highly engaging ninety-minute monologue in which the anti-heroine tells the story of how she ended behind bars, separated from the audience by an imaginary electrified fence. Restricted to her solitude onstage, the burlesque performer resorts to entertaining her voyeur onlookers with antics like stripping off a straitjacket and a Hannibal Lecter mask while singing Willie Nelson’s Crazy.

What starts as a bizarre comedy, with the severed head of Skye’s boyfriend put on a spike for added interaction, quickly becomes an ingenious parody of normality as seen through the eyes of the psychopathic protagonist. In a competitive frenzy to reveal the true extent of her crimes, the diva tells her story in a thick redneck accent. Thoroughly hooked spectators are then turned into partners in crime by sharing her frustrations, fears and expectations. Later, the fate of the murderess is decided by public vote. A hilarious Facebook stalking gag takes members of the public by surprise by showing photos of them as potential victims she’s got her eye on.

Death Row Diva is guaranteed entertainment for anyone with a dark sense of humour, as much as it is food for thought. In a display of amazing showmanship, Crimson Skye flawlessly commandeers a heavily interactive hour-and-a-half show at a relentless pace, with no breaks or even a pause for water. Such trivial matters are of little consequence when your days are numbered and there’s so much dazzling mischief left to do.

Photo credits: Gui O’Connor, especially for This Is Cabaret