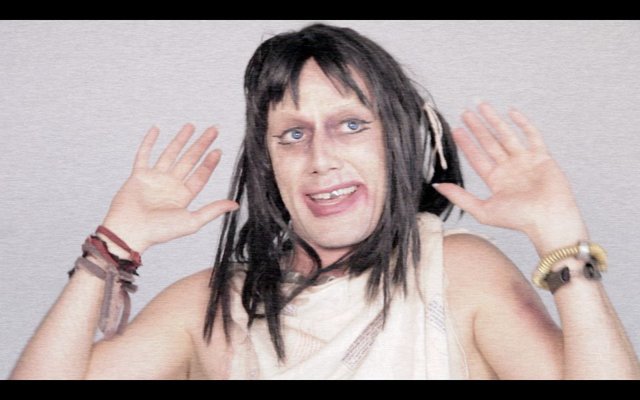 Possibly as a result of Channel 4’s longrunning Eurotrash and its normalisation of bizarre sexuality and London’s burgeoning performance art scene, it seems that we’re becoming a difficult crowd to shock. In the last two months alone, I’ve seen a woman in a dog costume fist herself on stage and a group of women torture a clown’s genitalia. This may explain the general reaction to alt-drag show Christeene: The Christeene Machine at the Soho Theatre: we all smiled politely, sipped our gin and looked at our watches.

Christeene is the second creation of Louisiana-raised Paul Soileau.  His first act, Rebecca Havemeyer, is portrayed as “in the lineage of Dame Edna” but seems to lack the wit and substance that Humphries gives his dame. Soileau’s second alter ego is formed of equal parts Die Antwoord, Kelly and Mel C and given a mucky, masculine aesthetic in a too-short dress. Despite calling herself a “drag terrorist”, Christeene assures us in a 2012 interview that she is “never doing this to gross you out or shock you.”  Make up your mind, love!

After the audience are offered protective ear-wear, the show starts with Christeene being carried onstage by two dancers dressed as gimp-hags.  She pulls a bunch of balloons tied to a miniscule butt plug out of her posterior and hands it to one lucky fan. The opening sequence is impressive – the choreography is tight and interesting, the music gives high energy and Christeene is in her element as she simulates analingus on her dancers. What becomes apparent as the show progresses is that no-one has ever taught Christeene how to use a microphone and no-one thought it would be a good idea to hear the vocal over the music.

Between songs Christeene gives us philosophical interludes which occasionally do have some insights.  Not another drag queen calling herself performance art, surely?  One perplexing moment is when she talks about our “inner ponies” in an analogy so convoluted we wish she’d trot her inner ponies off to the glue factory.

After the show, I get the opportunity to meet Christeene backstage before she mingles with the crowd.  Despite assuring us in a previous interview that “there’s nothing angry or asshole-ish or negative about Christeene. The character is very kind and approachable…” I found her aggressively defensive.  Perhaps my opening question on why she used such a disappointingly proportioned butt plug hit her pudendal nerve.  She tells me Christeene’s message is to “wake the fuck up” but can’t quite articulate what we should be waking up to or if she means it in a Buddhist or an existentialist context.  She tells me all this while sipping on pink Veuve Cliquot after having spent the entire show demanding whiskey from audience members.

The overall impression is of an act that has lost touch with its own identity.  She has some good songs and clever staging but what may drops jaws in the USA is old hat and receives a muted response from this audience except the small collection of teenagers in the front row who even Christeene noticed were high as kites.  Give this one a miss and go see David Hoyle or Mouse at the RVT instead.