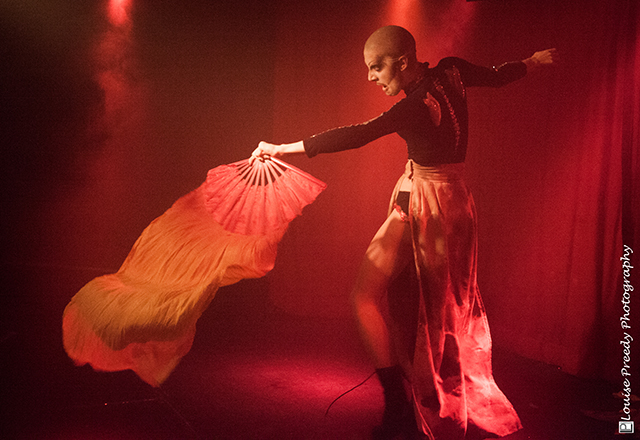 A new show is always a calculated risk, but Vivacity Bliss’s Cabaret Roulette goes one step further by letting the audience choose the theme. She then commissions cabaret performers to create relevant routines and puts them on at Madame Jojo’s, one of the most popular cabaret venues in London. Its première kicked off the proceedings with the end of the world as a theme. Did the gamble pay off? 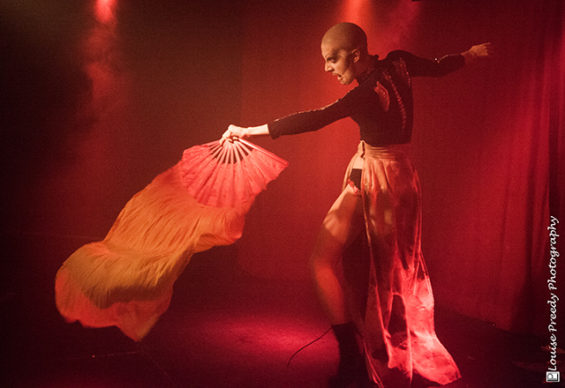 Compère Rubyyy Jones, gives the revue its few cohesive moments in a strong performance. This woman has enough enthusiasm, narcissism and sheer vocal volume for an audience much bigger than what Madame Jojo’s accommodates. A compelling force, she strolls the stage at ease while casually harassing patrons to buy her drinks. Ms. Jones also makes good use of her arse: displayed intermittently, it becomes the straight man in her comedy, and gets the largest round of applause of the evening.

The featured acts run the gamut of variety, including hula-hooping, fire dancing, accordion playing, belly-dancing and boylesque. Truly terrifying is Katie Jones, an anarchic one-woman army hellbent on destroying herself, the stage and the audience. Her manoeuvres look genuinely dangerous – it is amazing that the venue’s technical crew allows fire breathing in its small, low-ceilinged stage. This ballsy routine mixes fire eating, body burning, angle grinding and fire fans, along with three costume changes. A lot to cram into a single number, but this one is certainly cranked up to eleven.

Another excellent segment comes from cheesecake burlesque dancer Ginger Cupcake. While tap-dancing to Judy Garland’s Get Happy, she slowly reveals a body ravaged by some apocalyptic flesh-eating virus. The juxtaposition of the sugary sweet music and the scabs and bandages is an exquisite touch as she swings between hyperbolic smiles and the realisation of her own repugnance. The act is cheeky, disgusting, unexpected and full of chutzpah.

If the house always wins, the public for the first Cabaret Roulette was no exception. Madame Jojo’s was packed, something that attests to the general appeal of Bliss’ concept, even at its first outing.
Rounding off the evening, queerlesque artist Mister Mistress launches into a weird spectacle of fake blood and zombie decay. His confident moves are an entertaining treat.

Some of the sketches had little or no identifiable connection with the apocalyptic theme of the evening, which detracts greatly from a show with this premise. Nevertheless, fortune smiled on the affair, giving it plenty of fun acts. For the sophomore date of Cabaret Roulette on February 13th, the public has chosen the theme of fairy tales. If you survived the end of the world, that’s one spin of the wheel that’s certainly worth a gamble.

Do variety artists enjoy creating acts under the constraints of a themed commission? Read Daisy Black’s account of the experiment, featuring the vaudevillian guinea pigs that braved the stage for the first Cabaret Roulette.