Bourgeois and Maurice bring their acerbic wit and fabulous costumes to the Soho Theatre. 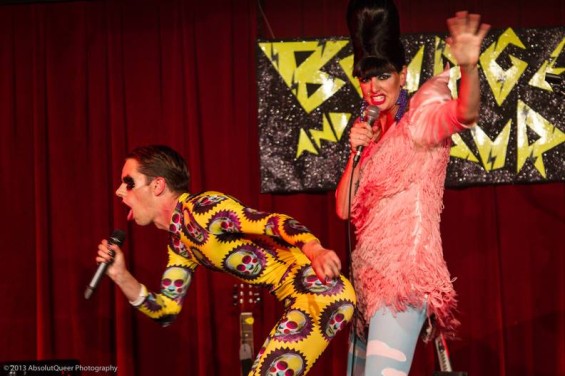 Bourgeois and Maurice in full swing at the Soho Theatre.

Downstairs at The Soho Theatre is a great venue for Georgeois Bourgeois and Maurice Maurice to perform their show, Sugartits. The tables are arranged in cosy cabaret seating, which suits their interactive, immersive style, and the bar stays open throughout the show which is always a bonus.

Bourgeois welcomes us to the show with a song that begins: “Hi Sugartits, we’re called Bourgeois and Maurice, you probably can’t spell it. Welcome, hello, how do you do? I would like to talk to you”. Bourgeois is resplendent in a black glittery suit and eyelashes that cover half his face. As he weaves his way through the audience, throwing marshmallows at the crowd, Maurice is at the piano accompanying him. It’s a ballsy and fun opening, Bourgeois taking every opportunity to touch as many people as he can, and it sets the show up for the smart smut that’s to follow.

The duo run through a set list comprised mostly of their new album, The Third, a collection of politically charged and topical songs, although these versions are stripped of the drums and guitar used on the album. Maurice reveals her guilty love of tax which leads to the satirical Tax Me. Maurice pouts and shimmies whilst singing for Mr Cameron to “Fill in” her invoice, and Privacy’s For Paedos is observational comedy with a catchy hook.

The city of Birmingham stars in a song that involves the live recorded looped voice of a member of the audience and smart lyrics that deal with the homogenisation of the British high street. Bourgeois uses shops such as Starbucks, Argos, Tesco and New Look, among many others, which means most of us are bound to get the joke, even those who have never been to the Bullring.

The songs swing nicely between styles; the foot-tappingly catchy Social Networks (Make Me Feel Shit Sometimes) is introduced, rather cleverly, by encouraging us all to tweet, Facebook and Instagram away to make sure everyone who didn’t come to the show knows they’re missing a brilliant night. And they are.

The melancholy Song for a Friend is a slow, thoughtful song apparently about regaining contact with old friends. That is until the chorus kicks in and the rejoinder turns to “your boyfriend is a twat”. Bourgeois and Maurice have a habit of twisting expectations and taking songs to an unexpected place and this song fits that MO perfectly.

This wouldn’t be a Bourgeois & Maurice show without lashings of audience-orientated japery. The louche Bourgeois points out audience style choices, sits on the laps of various gents and later divides the crowd into two halves for a jovial sing-along.

Whilst most of the dialogue is witty some does fall flat. There are moments, such as Maurice’s failed application to become the next Pope, where the humour isn’t as well delivered and the pair seem a little awkward. The Joanna Lumley “Patsy”-style voice Maurice adopts seems a little forced at times and it can actually get in the way of some great jokes by her trying to be too deadpan. These moments are few and far between, however, and most of the show is unerringly laugh-out-loud funny.

As ever with this dapper duo, the costumes require a mention. Beneath her trademark black beehive and in a pair of blue tights with a cutesy clouds floating over her thighs, the impressive shoulderpads on Maurice’s salmon pink Tina Turner-style fringe dress reach almost as high as her hair. Georgeois Bourgeois strips off his sparkly suit to reveal a yellow and purple Vladimir Putin-mocking all-in-one skintight jumpsuit. The costumes are the epitome of their show: outlandish, colourful and fun.

The vocals from Bourgeois are as strong as ever and he is incredibly quick off the mark with heckles and shouts. The lugubrious Maurice, whilst not as strong a vocalist, manages at one point to play three instruments at the same time. Together they cover each others’ weaknesses and create a show that is street-smart, witty and full of insight into and commentary on modern issues.