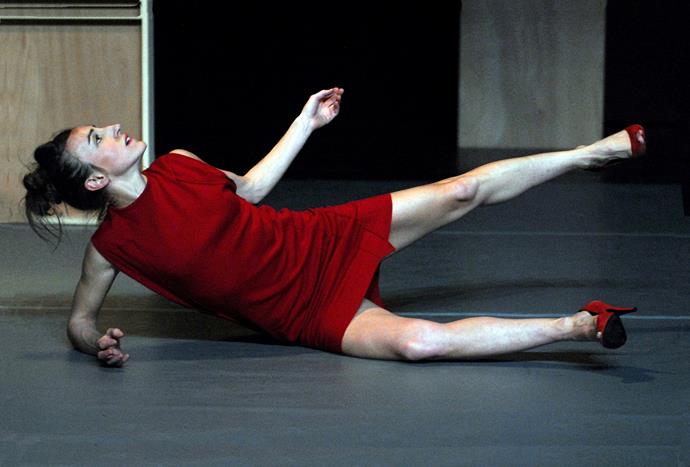 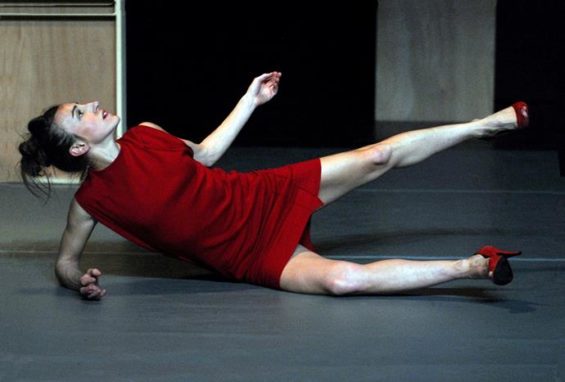 Choreographer Tomeo Vergé has wild eyes and a seductive flickering gaze: her three minute spoken introduction frames what will be a gruelling fifty-five minutes of motion. We learn of the peculiar ménage à trois between her grandmother and two grandfathers, one of whom returned from the World War Two battlefront to find her remarried and moved back in with them.

She speaks of another trio – her father’s profession of butchery, her own as a doctor and later a dancer, and the latent associations of meat, flesh and bodies. This is the last direct and conventional signification we get. From here on in physicality and gesture is abstracted or, more precisely, broken down into fragmented glimmers of meaning: shards of a cracked mirror in which to see ourselves, cracks through which the light gets in.

Essentially what we see on stage is just shy of an hour of the miniscule actions that make up everyday life in a far from average relationship, stuck in glitching slow-motion. The three dancers jerk, splutter and spasm their way through actions as inane as opening the door or lifting an object from the floor. They quiver with a mechanical certainty and ineffability. Yet with each gesture dissected and examined, a tragic hesitancy and reluctance is illuminated; Vergé seems to suggest we are trapped within these bodies, exhausted by the repetition implicit in living out the consequences of our spoken decisions.

As in David Attenborough’s documentaries when the frost enacts a strange waltz with the forest floor as we watch it advance at squillions of frames per second, here too something alien is revealed amidst the commonplace. A kiss loses all its romance and becomes comically grotesque and laughter resembles twitches of the freshly dead. There is deep horror and violence in the choreography but also a surreal beauty in its attention to detail.

Whilst Anatomia Publica holds the attention visually, it seems that time almost stands still at points. An intriguing and original concept, it was nevertheless fairly exhausting to sit through – and not in an emotionally ravaging, wonderfully violating way. With all its focus on flesh and surfaces, the show does little to infiltrate the head or heart.

Anatomia Publica continues until tomorrow night (25 January). More information can be found on the Barbican’s website.The trailer for this show can be found here.