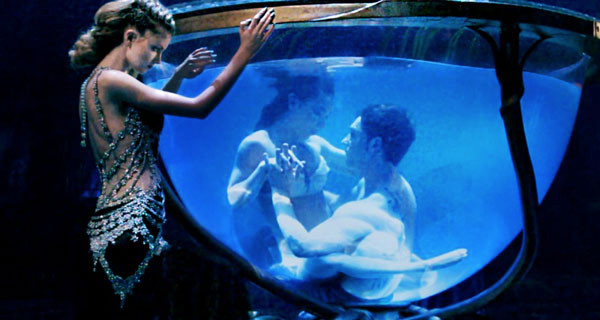 Amaluna is a relatively recent output from Cirque du Soleil; it premiered in 2012 and has been touring since. Now, at the start of 2016, it touches down for a few months at the Royal Albert Hall, the traditional time and place for the company’s UK visits. Having seen many of their shows here, I can say it’s always a very pleasant evening, the level of the performers is phenomenal and the production values high. Ultimately it’s great fun, if a bit silly.

“Ama” (meaning mother in many languages) and “luna” (meaning moon) is a strange island inhabited by women. Prospera has a daughter, Miranda, who is growing up. Along comes a shipwrecked boat with the handsome Romeo. They fall in love and get married, while learning some valuable lessons about relationships from various female gods: the Balance God teaches trust, the Peacock God, purity and so forth. It’s a romantic comedy, but without the usual narrative arc where something goes wrong in the middle. There are also two clowns whose relationship is of a more slapstick and bawdy kind give some well needed comic relief.

The simplicity of this format will work well for children and families, who are ultimately the target audience but be warned: if you have any critique of gender norms, please leave them at the door. This is a celebration of traditional femininity and womanhood that has been wrapped up in faux mythology and inexplicable literary references, then given the usual unproblematic varnish Cirque du Soleil do so well. If you find the world complicated, confusing and filled with questions then this could be a great holiday from that – if you want a little more depth from a show then perhaps this isn’t the show for you.

There are some very strong moments. The solo handbalancing/contortion/water bowl act from the character of Miranda shows exceptional strength, control, flexibility and the right amount of drama with a few scary looking dives. Anyone who enjoys watching a beautiful nymph-like woman in a bikini splashing around in water will enjoy this. Later Romeo strips off his shirt to engage in a very accomplished Chinese pole act that will similarly excite those who like the idea of an attractive half naked man showing off feats of strength. Both performers excel in these solo spots where their abilities are given a chance to shine. Elsewhere, the group work of the Amazonians (female gymnasts) on a custom set of uneven bars is filled with energy, skill and excitement, while the Sailors’ teeterboard act is of a similar high standard, with big flips and difficult manoeuvres.

Those who know their circus may be disappointed by the aerial hoop act from the Moon God, which relies more on swinging around with counterbalance than technical physicality. The straps are nice, but having three synchronised performers with an additional solo performer means there is too much going on at once for me. Overall though, the acts work well, with the Icarian games a nice way to finish it all off. The rare foot juggling act is performed with incredible skill, though it follows a very traditional format.

Production values are of the high level this company have been putting out for years now, though the costumes are a bit all over the place – the programme tells us they have drawn inspiration from a diverse range of sources but, in truth, it all feels mashed together and incoherent. The main lizard has an excellent tail, the peacocks are pretty and many of the headpieces are very nice. But the Balance God has only a gold bikini and sash and a group of lizards wear something that looks like they are street villains from an 80s Batman film, with a soundtrack to go with it. The music is grand and epic throughout, but so polished it feels autotuned.

This is the crux of Cirque du Soleil – it’s all so safe. The lack of nuance means all we have are archetypes and the simplest of emotions. It’s like eating a bag of sugary sweets while watching a Hollywood blockbuster full of special effects at the IMAX. It’s exciting and entertaining, but superficial. If you have never seen Cirque du Soleil at the Albert Hall, it is definitely worth going to – especially if you have children – but there is sure to be more invigorating circus elsewhere over the next few months as we look forward with London International Mime Festival and CircusFest.