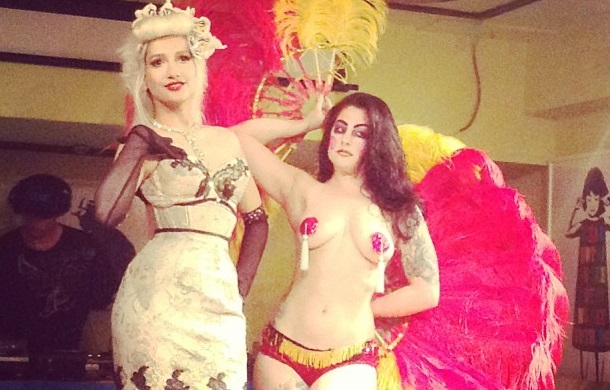 After taking their world tour to both the west coast and east coast of the United States, Aurora Galore and Sukki Singapora headed to the Far East for shows in Japan. How did they get on? 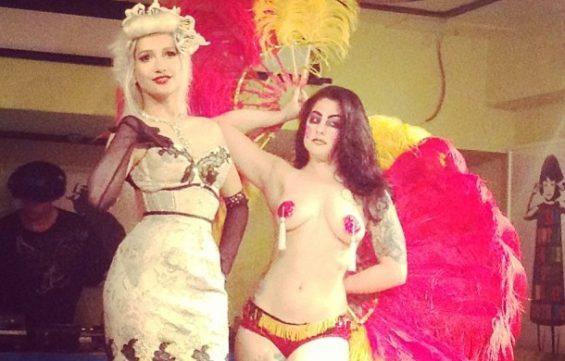 So we made it to Japan! And, unusually for the visiting burlesque performer, we were able to experience not just the Tokyo scene but also that in Kyoto.

The Japanese leg of our world tour held a number of highlight. Our first show was UrBANGUILD – this was by far the largest stage on the Japan scene and a true variety show with musicians, modern performance art and, of course, burlesque. The talent was immense, and it was great to see the venue full on both consecutive nights. Sadly, it’s the only show in Kyoto, so it was a long way to travel for just two shows (a fair few hours by bullet train).

When we arrived in Tokyo we were greeted by a much wider reaching set of shows. Amaranth Lounge, run by the wondrous character, Madame Regine, was definitely one of the most spectacular venues. Situated on the 6th floor of a high rise building (as is often the case), the elevator opened out into a gothic and opulent nightclub. The venue has a modest but loyal fanbase comprising of catwalk models, businessmen, tourists and hardcore burlesque enthusiasts. It was like a miniature scene from Baz Luhrmann’s Moulin Rouge, and we lapped up every moment of this special anniversary show.

On a casual  Wednesday, we performed at MIDWEEK Burlesque produced by Burlesque Hall of Fame Performer Violet Eva which was probably the largest venue we performed at. The stage featured the sort of high tech under-floor lighting you’d imagine from Japan, and there was an abundant audience that gave us a lot of love. What a great show!

Another highlight was the anniversary show of Baps Japon which has by far the largest audience in the Japanese burlesque scene. It was the first example we’d seen of New York go-going outside of the US. The show featured an all-burlesque cast, divided into two halves with a supporting live band. It was great to see people adding to the crammed audience well after 1am and the atmosphere was fantastic.

Gimmuku Rock was a more intimate and personable show. It was small, but so interactive. We got to engage with the audience members during and after our performances who were so inviting of us into their country.

Our final and extremely fabulous show was the wonderful world famous Dr Sketchys: Tokyo. What a wonderful experience it was to be able to perform and pose for people who don’t even speak the same language as us. There were so many experimental types of art equipment that they were using and it always fascinated me how people perceive me.

All in all, it was an invaluable burlesque, life and cultivating experience and even if not for burlesque, I recommend anyone to go and experience the colourful country that is Japan!

Wondering what burlesquers pack for their world tours? Sukki Singapora gave us some insights into exactly what went into her kit bag.