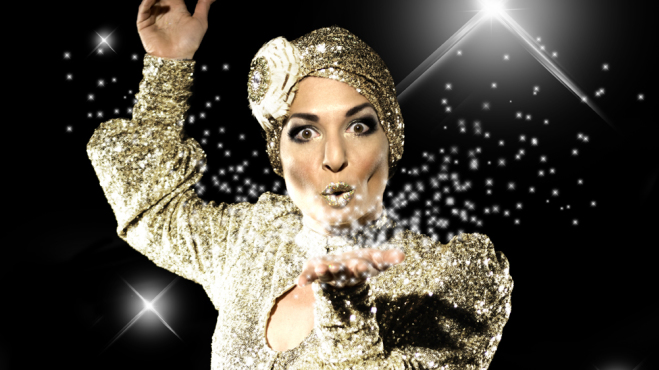 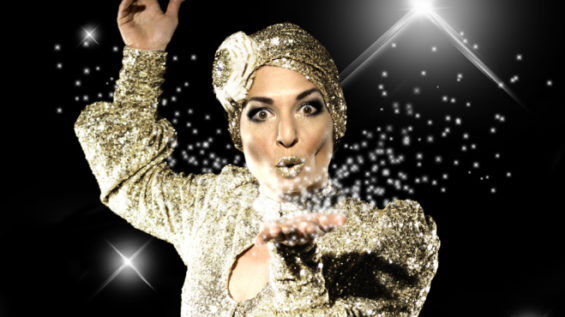 Miss Behave’s Gameshow is “more of an adrenaline rush than a show.”

Miss Behave’s Gameshow is a one woman attack on the “narrow-minded” comedy scene.  Deliberately lo-fi, chaotic and (almost) without structure, this is not an experience for the meek-hearted or the righteously offended.

As I wait in line to enter the Spiegeltent I hear a gobby woman barking orders at people in the queue.  “Get your phones out!” she shouts, “we’re running late, get another drink, quick!”  She’s wearing a figure-hugging gold sequinned boiler suit and a matching hat.  This is, of course, Miss Behave and she’s asserting her dominance before we’ve even had our tickets torn.

Walking inside we’re separated – “iPhones to the right, others to the left” she orders.  We’re the contestants on two teams she explains, pointing to the rules at the back – rules such as “life’s not fair” and “don’t ask, don’t get”.  Let the games begin.

This is more of an adrenaline rush than a regular variety show.  From the start each audience member is encouraged to take part using their phone with the initial challenge being to be the first person to ring her.  As the game show progresses the games become more elaborate as we pass through the selfie round, the quick-tweet round and the demise of an iPhone in the smash-a-phone round. 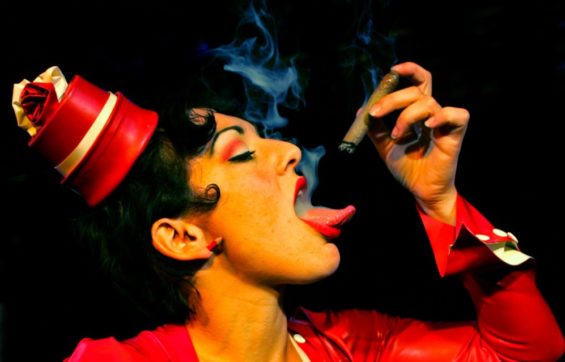 Smokin’: the Gameshow’s Mistress of Ceremonies has appeared in La Clique, La Soiree and The Crack.

The audience leads the show off in tangents as they get into the spirit and demand points, jumping up on stage and shout like their lives depend on it.  Even this calm, reserved reviewer found himself racing to the stage to (successfully) win the selfie round.  Miss Behave is an experienced pro in her element as she first stirs the audience into a collective wild beast and then whips it back into place with killer one-liners and a suggestively cocked eyebrow.

In between rounds of the game show are guest acts including Earl Okin and The Two Wrongies are of the highest standard and utmost hilarity. Thankfully, they give some relief from the intensity of the competition without letting the comedy slip.

Joining Miss Behave is her glamorous assistant Harriet. Standing approximately six foot two inches with a full beard, Harriet appears as a dainty schoolgirl complete with red lipstick and poodle backpack.  She manages to be the star of the show without stealing any limelight from Miss Behave – isn’t that the Holy Grail of glamorous assistants?  Most impressive is Harriet’s dancing ability including using her own fully-extended leg as an air guitar.  Both beguiling and alluring, Harriet easily wins the audience’s affections – they stamp and cheer for her while some event mount her on stage.

This experience grabs hold and kicks your inhibitions to one side.  A sense of camaraderie develops amongst teammates who high-five and compliment each other at the bar.  By the end we are all devotees of Miss Behave and admirers of Harriet – thankfully both of them join their fans outside after for a debrief akin to that given to troops after battle.  I cannot recommend Miss Behave’s Gameshow enough.

Miss Behave’s Gameshow can be seen this Halloween at Vogue Fabrics, in Brighton’s Marlborough Theatre on 21 November and Bristol’s The Cube on 27 November.