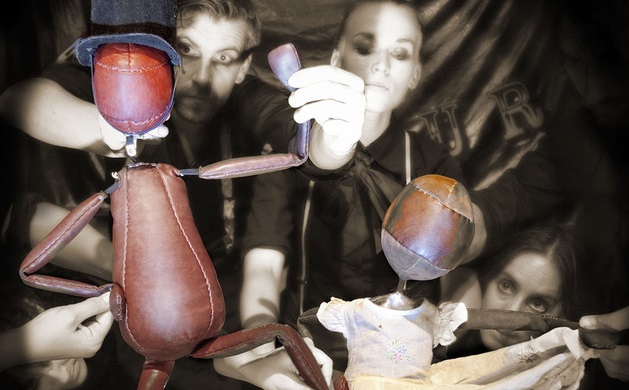 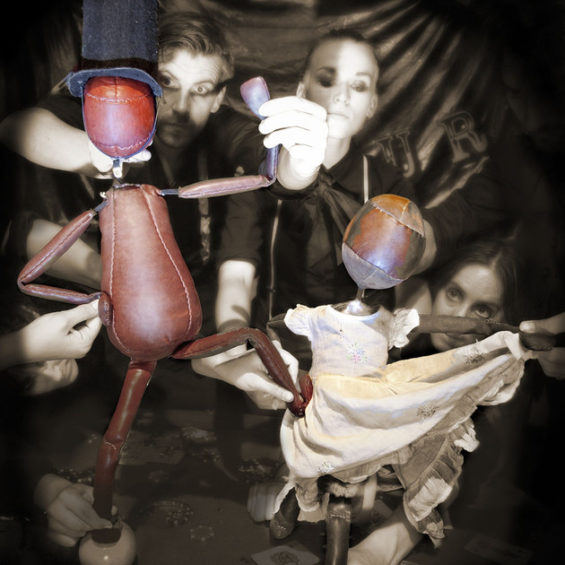 I blame Sandie Shaw.  Puppet on a String was Britain’s first Eurovision success and since then we’ve seen the popularity of the puppet rise in the UK.  Bagpuss, Thunderbirds, Rod Hull’s Emu and lately Britain’s Got Talent finalist Patsy May, there’s no denying the place of the puppet in our hearts.  Boris & Sergey, the brainchild act of Flabbergast Theare, found acclaim at the 2012 Edinburgh Festival and they are taking their Astonishing Freakatorium on the road with a brand new show I saw at London Wonderground.

Flabbergast Theatre aims to push the boundaries of modern puppetry and their on-stage companions are examples of Flabbergast taking the ancient Japanese bunraku tradition and giving it a decidedly Shoreditch twist.  Not for Flabbergast are masked puppeteers all dressed in black but instead unmasked operators sporting pinstripes and braces.   The lead roles are voiced by Henry Maynard and Dylan Tate who, being unmasked and animated while giving the characters their voices, are often more charismatic than their faceless leather puppets.  We also see hints of Canada’s leading amphibian in Boris’s supposedly Eastern European accent

From the start of the show we see that Boris and Sergey are flying by the seat of their pants.  Their relationship is reminiscent of Sesame Street‘s Bert & Ernie, though less overtly homosexual.  It opens with a scripted series of events that are somewhat slapdash in the delivery giving an overall flaccid performance.  The leads are joined on stage by a selection of puppet creations who provide voiceless interludes.  Impressive as their bunraku skills are, Flabbergast really need to find something else for these puppets to do.  The novelty of a tap dancing cannibal wears off after about thirty seconds when we realise that’s all he does.

Patsy May is the latest testament to the fact that we love interacting with puppets. This proves to be true during Freakatorium’s Super Spooky Story Time, when the audience leads an improvised tale that the puppets perform, and the séance that forces audience members to act as channels for the spirits of the Wonderground.  Here is the true attraction of Boris and Sergey – three puppeteers giving each puppet sharp, off-the-cuff movement with Maynard and Tate delivering a hilarious assault of one-liners.  So good were these segments of the performance, far exceeding the lacklustre scripted remainder, I can’t help but wonder if we really need the faceless puppets as props in the Maynard & Tate Show.

It all ends with mass puppet suicide done with beautiful poignancy. This sits as an awkward appendix to the show. Neither comedic nor relevant, I can’t see what it added to the otherwise jocular atmosphere. Even as a piece of artistic puppetry it hangs at the end like a marionette that has had its strings cut.

Boris & Sergey’s Astonishing Freakatorium is an interesting show with moments of comedy gold.  If you’re looking to entertain a group of twelve year-old boys for an evening it’s perfect.  If you’re looking for pacy, theatrical comedy wait for Maynard and Tate to ditch the puppets and launch their own show.

Boris and Sergey return on 18 and 25 June. For full ticket information, check out our Ultimate Guide To The London Wonderground.