Reuben Kuan: From The Streets To Cirque Du Soleil 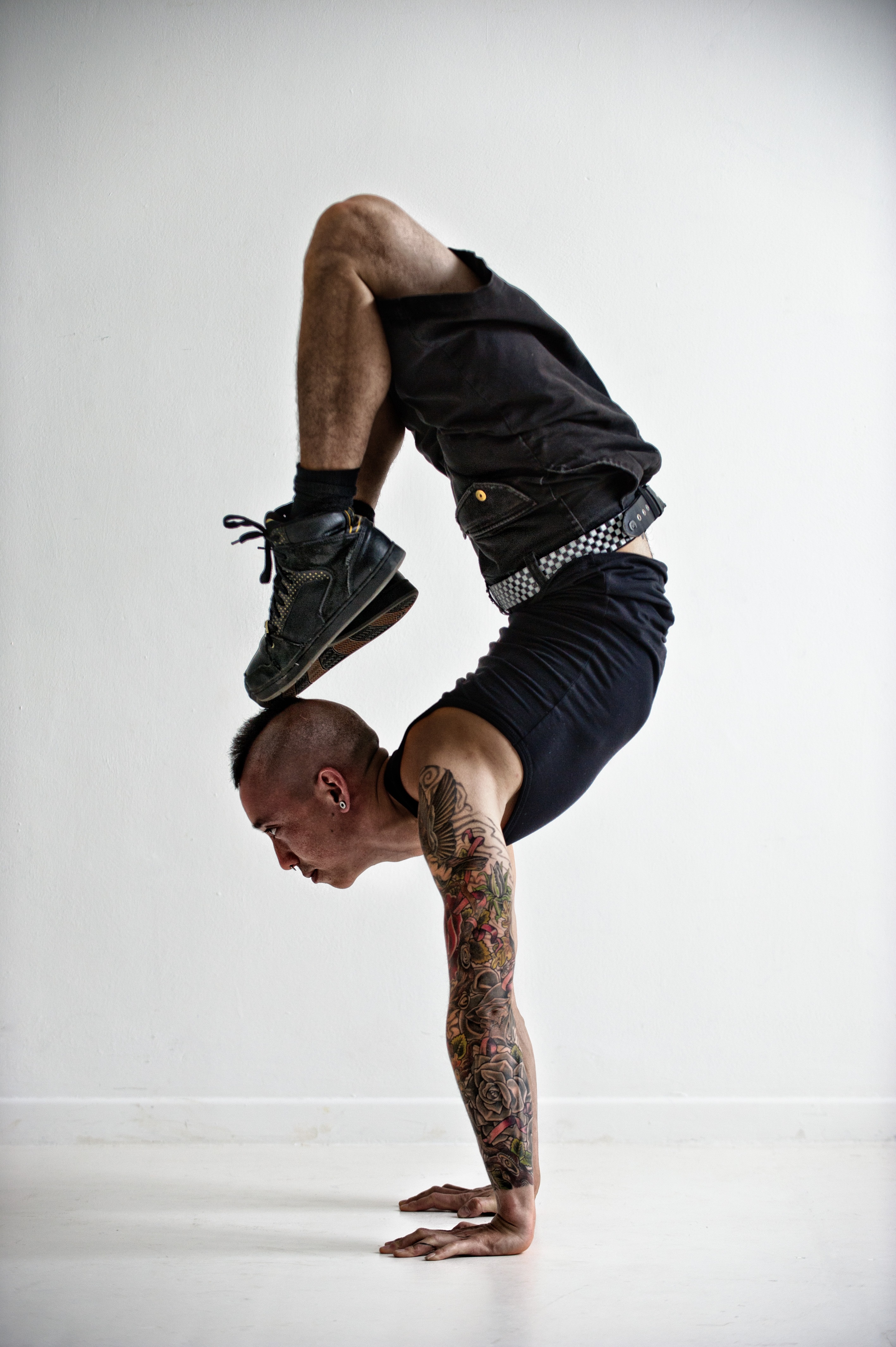 Award-winning street performer Reuben Kuan graduated from watching a video of a Cirque du Soleil show to appearing in the production itself. 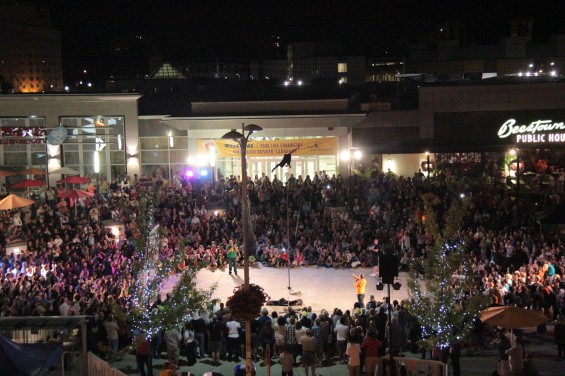 Reuben Kuan began his performance career on the street in Australia, building a show through the art of continual performance and constant changes. Over the years he has performed and studied several disciplines, but is most well known for his hand balancing and Chinese pole acts. After teaching himself Chinese pole on muffler pipe from a video of Cirque du Soleil’s Saltimbanco show, he went on to train in China. After years of touring he has become a regular at street performer festivals all over the world, and has been part of the Chinese pole specialist troupe in Cirque du Soleil’s Saltimbanco.

Kuan has also picked up a range of awards recently on the buskers festival circuit. He was a runner-up at last year’s Street Performance World Championship in Dublin and this year has won no less than four People’s Choice awards at various busker festivals across Canada. 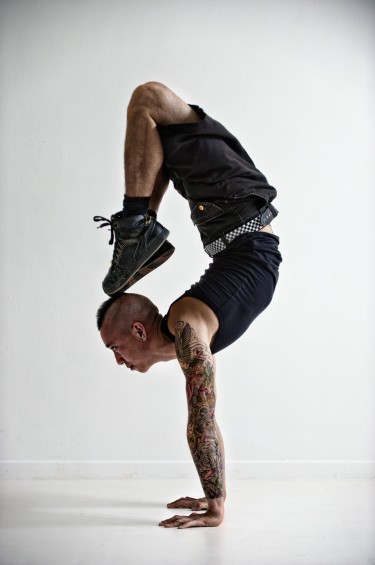 It was a roundabout way. When I was a kid I can remember watching circuses with my parents, and a street show here and there. I was a gymnast from 12 years old. I remember doing Spanish web in a horrible pink leotard in a holiday resort, that’s my earliest performing memory. After finishing high school and bombing out of Computer Science at university, I became interested in circus for real and saw an opportunity to use the skills I already had as a gymnast.

How did you get started and what was the first step?

I was working as a courier, delivery guy, bus boy, furniture removals’, packing milk, just general labourer, and was playing in parks in my spare time. I was travelling in Australia going to festivals in the summer, juggling and playing a lot. At the end of the summer I wanted to go to a circus school to learn more skills. I tried out for NICA, but was not accepted.

A great guy that I met travelling who was also trying to get into NICA was not excepted. Later I found another course in Melbourne called “Small company/community theatre/festive arts”. I really want to work with him, but had no way of finding him so I put up a poster in “JuggleArt” asking him to contact me. He did and we both went to this school together. Ahhh, the times before social networking sites!

There I learnt lots of skills, both on stage and off stage, to create acts and bring them to an audience. It was the most amazing learning experience I have ever had, I learnt how to teach myself. We created a show out of it, and from that time I have never worked as anything else.

Your website is split into two areas. What made you present yourself as a split performer?

I wanted to split it into street-style shows and everything else as street is so different. I think it might of been from the fact that I really wanted to define myself off the street, and prove that I could make different styled acts. It’s hard to leave your street persona, so for my own head as well. I had to have a different name, different style. Setting myself up as two different entities was my way of doing this. I don’t know if it works for anybody else, but it works for me. When I leave for a show that is Reuben Kuan, it’s a different person to Reuben DotDotDot.

Do you find you are more employable, offering two contrasting performance packages? Does it allow your clients to make a more informed decision about which type of show they would like to see?

That’s what I hope. I do think it helps even just by the style of the website, they can sort of feel the difference and know what they are going to get.

Do you have a favourite venue? If so, why?

For stage my favorite venue has to be Teatro Circo Price in Madrid. A huge round theatre, with a big top permanent structure feeling, it was amazing. On par, I love a good street pitch. There is nothing that can compare to a random public space where you and the audience make the show: no venue, no lights, no smoke, just you, and the audience. 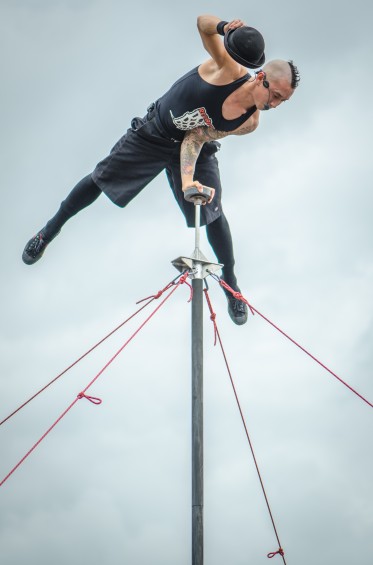 What makes a good performance space? What do you like to see when you turn up for a performance?

An audience that wants to see a show! Obviously all your tech requirements are nice, but I want the people to want my show.

Do you find the worlds of private venue performance and street performance extremely different? Do the audiences have different wants and needs?

What are the challenges of being a street performer?

Rejection and constant failure. No matter how good you think you are, you will fail, it’s a given. There are also so many inconsistencies and factors. Weather, surface of the ground, the demographic of your crowd, time of year, use of space, controlling your audience. Every show is different, you actually have to actively be doing your show and reading your audience, changing things on the fly to suit.

And to go along with all of that, on the everyday street, these people aren’t here to see your show, for all intents and purposes. In fact, you’re actually a hindrance to what they are out and about doing. You have to be able to draw them in and make them want to see you succeed. Mix that with being able to understand different cultures from around the world and how people relate to each other and stimulus, and you have the hardest shows you will ever do. You might think getting a heckler in a club is bad, but standing in front of a crowd with two guys walking into your show, yelling for you to “get the f$ck out of my country”, about to punch you in the face, that’s something else entirely to deal with.

What are you currently working on? What’s happening in your world right now?

I’m doing my normal schtick, but I’m also working on two new acts. One is a silent hand balancing act called Casual Fridays, based around trying to smoke, drink scotch and be upside down at the same time. It’s a street-style act that can be played in venues, the street and festivals and in a bunch of different ways and with different time constraints. I have been doing it for a while but it’s my baby at the moment. I am also working on a new duo act with the amazing Betty Brawn. It will be a character hand to hand act, with a huge finale, very excited!

Give us a few Dos and Don’ts, for those just starting out.

Do be ambitious. Set high goals, but always remember to analytically dissect these into smaller goals that you must achieve. Staring up constantly does not help if you can’t see the stairs.

More information on Reuben Kaun can be found on his official website.

All images provided by Reuben Kuan.