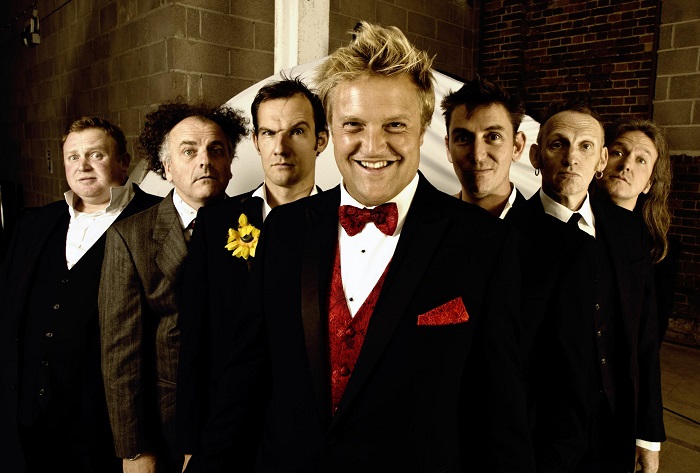 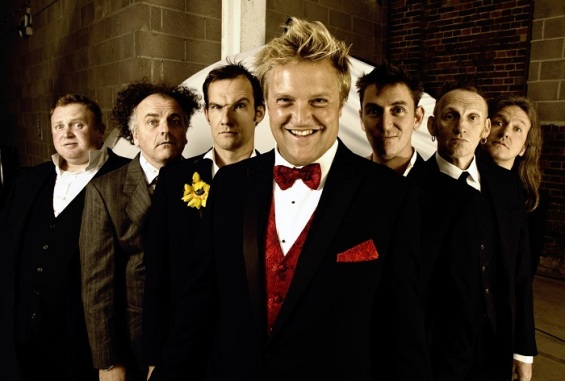 Slightly Fat Features’ VarietySoup will be at the Leicester Square Theatre from 15-29 December.

The show won the Montreal Just for Laughs’ Prix Coup de Couer this year and this no-filler all-killer cavalcade of vaudeville is stopping off over the Christmas period from 15-29 December.

We spoke to SFF’s Goronwy Thom about what to expect.

How would you describe Variety Soup to someone who has never seen an Slightly Fat Features show?

You have to see us live, I think but on paper it is a comedy variety show. There are physical skills, visual comedy and orchestrated madness. It’s an edge-of-your-seat smorgasboard of cabaret with circus tricksters, original live music, astonishing human skills, cling film escapology and bullet catching dogs.

Did you say bullet-catching dogs?

Yes. And did I mention the acrobatic elephants and tiger-taming magicians?

Cripes. Let’s go back to the start. How did the troupe come together?

The first shows started in Sidmouth in Devon in a great theatre called the Manor Pavilion. I started producing shows there called Variety by the Sea. Over several years, I did lots of shows which developed a loyal audience and invited many guest cabaret acts and a local dance school too. That gave us space to develop new bits.

Over this time all seven of us ended up at every gig along with Fraser Hooper and Vince Henderson. We developed material which was more group based than solo cabaret spots. We took a show of this material to the Norwich Norfolk Festival and Leila Jones of the Roundhouse saw that show and we got a booking as part of Circus Fest 2010 and that was when we kind of officially became Slightly Fat Features.

We did some actual rehearsals and did a tour including the shows at the Roundhouse, Brighton Fringe, Tobacco Factory, Bristol and lots of other theatres in the UK. Since then we have toured that show again and also made a new show called A Fat lot of Good . Petra Massey collaborated with us on that for the first time when she came in to give additional direction.

Variety Soup is a mix of those 2 shows and roughly the same show we took to Edinburgh (thanks to Ryan Taylor and the Pleasance Theatre) and to Just for Laughs Montreal.

A lot of us did and still do street theatre work. Five of us met at Covent Garden over the years, some of us have known each other for 20 years!

So a street theatre background is a common strand and it is where most of us met. I guess we have a style onstage which is influenced by that. But our street work is very different from the variety shows: some of the same skills are used but in a different way. We get asked if we prefer to do shows inside now, but we don’t see it as an either/or. We can still do street theatre work and work in theatres too.

There’s been a resurgence in interest in variety for a number of reasons, not least talent shows like BGT. Do you think talent shows are helpful in promoting variety? Would you consider going on one?

The producers of BGT always phone- every year and ask us about going on, but we wont do it. Having said that some good friends of ours have done very well out of appearing on BGT and got stuff out of it.

I think shows on TV raise the profile of variety and have had a helping hand bringing variety back into the mainstream. People are now used to seeing shows like Britain’s Got Talent but invariably there are only one or two proper cabaret acts that make it to the final.

It is a shame that there is no show which is programmed like Live at the Apollo where the acts have actually been selected and have a little bit of stage time to establish themselves rather than being at the mercy of an editor and a buzzer.

What was it like to win the Prix Coup de Couer? And who gets to keep the trophy?

It was great! We had a lovely time in Montreal being part of that incredible festival with all of its history and getting the amazing reactions from audiences and press that we did. The award was a very nice finishing touch – the cherry on our slightly fat cake! I get to keep the award. We talked about having a month or 2 each and having shared custody but i kept it!

We can’t help but notice that there are no girls in Slightly Fat Features. Is that a deliberate thing or does it just suit the SFF dynamic to have guys?

It wasn’t deliberate or conscious. When we formed, it was over a period of years and it was just by chance it was all male. The group formed from many cabarets with many performers but the same people kept coming to Devon to develop more material, for no money alongside the other acts i had booked.

It was this group that developed the material which we took to Norwich Norfolk festival and that group was all male. So that was the show we rehearsed and took on tour. So when we officially became Slightly Fat Features in 2010 it was an all male group. So that is part of the dynamic now i guess. But it wasn’t a deliberate choice. It just turned out like that.

What would you say about the state of modern variety? It seems that there are more performers and no shortage of creativity but less and less venues every year. Would that be a fair comment?

I think it is still out of the mainstream. There’s BGT obviously but, other than that, there’s a lack of proper variety with speciality acts. I think it could break big still. I hope it does- and when it does that we are part of it.

There are many more performers definitely but also more opportunities than when I started in 1998. There were circus cabarets back then but few and far between. Circus Space used to run regular cabarets and they were unique at the time. Glastonbury was also a good hive of cabaret. There were places but you had to search around for them.

La Clique (and its current incarnation La Soiree) becoming as massive as they are, has helped a lot and, along with the resurgence of Burlesque, it seems that lots of people have started to produce cabaret shows all over.

So who should we look out for in the variety scene?

There are many great nights out there and lots of great people putting on shows – long may that continue. Miss Behave is doing amazing work to generate shows packed with acts, Mat Ricardo is working incredibly hard to make juggling cool, Boy With Tape On His Face of course has really taken it to the masses as has Lili la Scala and her variety shows. Regionally, there are some amazing nights with regular packed nights at Cabaret Boom Boom in Sheffield and Cabaret Heaven too.

We tend to try and tour Slightly Fat Features shows to theatres (although some don’t want cabaret shows) so we haven’t really been affected by venues closing. But hearing that venues are closing is horrible and it is a travesty that Madam JoJo’s might go. Venues like that should be saved.

You can catch Goronwy and the rest of the Slightly Fat Features mob in Variety Soup at Leicester Square Theatre from next week. See the venue’s website for details.