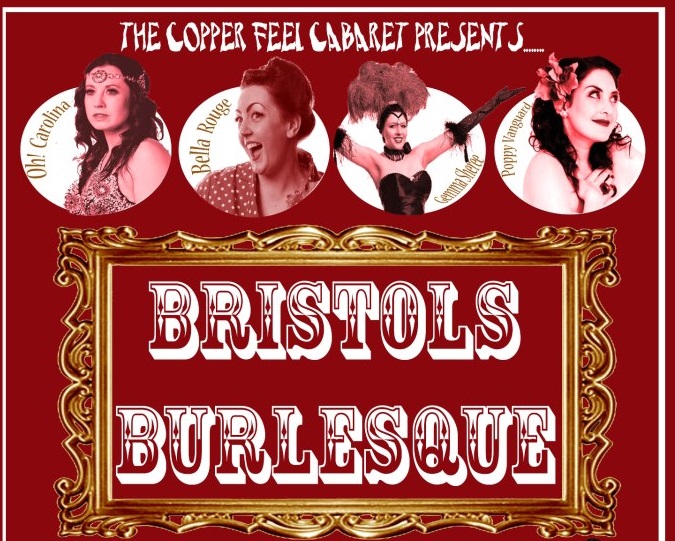 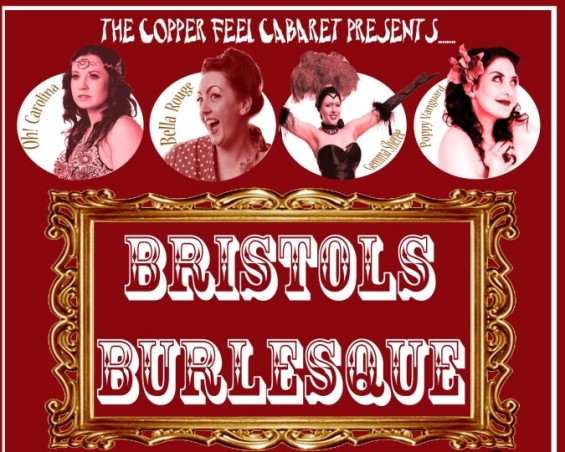 The next Copper Feel Cabaret event is on 13 July.

Recent events in the press with the National Trust hosting burlesque in Devon and Cornwall certainly  caused a stir, but it made a change from the usual woodland bug hunts and jam making workshops that seem to mostly be on offer.  In actual fact, if you go down to the West Country today you’re in for a big surprise.  For a start, it’s not at all like The Archers.

From Bristol (where the world ends in both directions) and Wales and all the way down to the bottom end of England – yes that’s Cornwall – there are burlesque and cabaret venues, established circus companies and pop-up events happening in arts centres and small theatres and other venues with an increasing frequency. Some quarterly, like the gas bill, but many bi-monthly and actually you can find somewhere to entertain you pretty much any time you like.  Not just on your birthday.

So here’s a look at my highlights of what’s happening in the South West, starting in Wales and working our way down – a grand tour if you like from Llanelli to Land’s End… 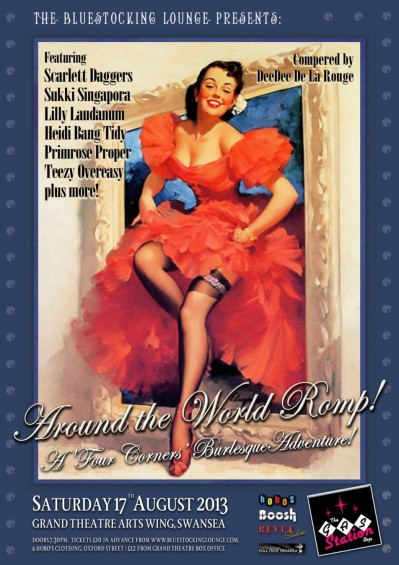 Bluestocking Lounge, run by Lilly Laudanum is an established bi-monthly burlesque club that brings top names on the international scene to venues in Swansea and Llanelli. As well as supporting new and upcoming local performers since it began in February 2010, Bluestocking Lounge has seen the likes of internationally renowned Red Sarah, Diva Hollywood, Beatrix Von Bourbon, Missy Malone, Banbury Cross and more as headline line-ups. Their next spectacular is on 17 August and features Sukki Singapora and Heidi Bang Tidy, one of the organisers of the Hebden Bridge Burlesque Festival.

In Newport, Tom Stanger runs a quarterly show called After Hours Cabaret which promises to bring some of the very best in cabaret and burlesque. It is relatively new having started in September 2012 but shows promise.

Moving across to Bristol and beyond, there is so much going on that you can take your pick from everything from street parades and pop-up burlesque and cabaret shows to established venues.  The best place to look for current and upcoming listings in the South West area is on the South West Burlesque Collective’s website, CoochieCrunch.com but there are some particular highlights you should look out for.

The Copper Feel Cabaret  is one to watch as it is new and I really like the name.  Hosted by Lou-leigh Blue in the heart of Bristol at The Old Stag and Hounds, their first show on 13 July will have acts from such varied performers as Tabitha Tease, Poppy Von Tarte and Bella Rouge.

Bristol also has its very own Dr Sketchy’s Anti-Art School which is also run by Lou-leigh Blue at the same venue. On 14 July, they will be holding their launch party witha three-hour class featuring nine girls and the “Stoke Crofts Siren” Ally Katte.

The Rebelado Showgirls are based in Bristol but perform internationally as well as across Somerset and the South West. They are a professional Brazilian Samba organisation with dancers, stilt-walkers and drummers who have been touring internationally for over 10 years. This versatile and family friendly troupe provide entertainment in the form of Carmen Miranda street theatre walkabout and “samba tots” interactive dance workshops for festivals and circuses.

Last but not least, Mocking Bird Burlesque is run and hosted by Bethany Blue and Paloma Violets and puts on regular shows at bars in Swindon and Gloucester as well as performing all over as the Moreorlesque Sisters.

Is that it? Of course not. Watch this space for the second part of Miss Von Trapp’s guide to the vaudevillian delights of South West England.