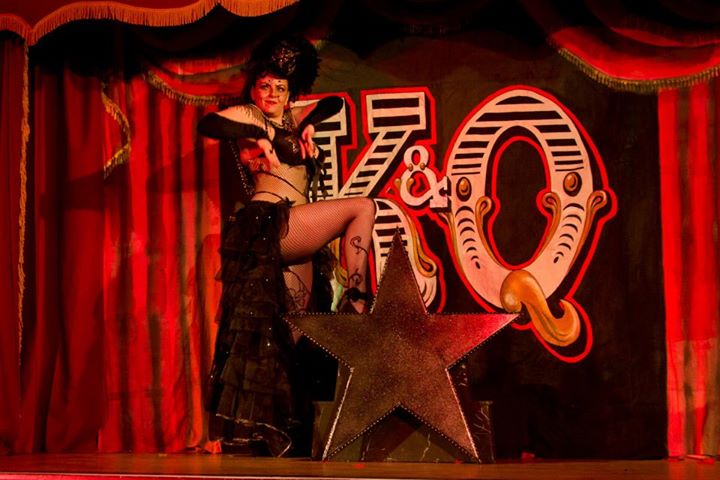 In the first part of her comprehensive roundup of cabaret in clotted cream country, Miss Von Trapp pointed out many a highlight of the South West of England, focussing on Bristol. In the second part, she shines a light on the attractions of Cornwall, Plymouth, Exeter and Torquay. 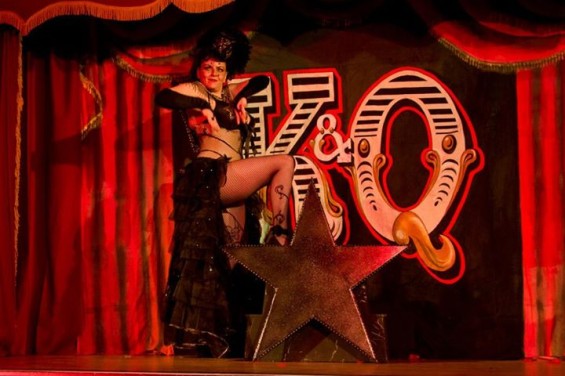 The world doesn’t end at Bristol and you can always pack some cabaret with your cream tea as you holiday down to Devon and beyond. And you might even see me at some point…

Shhh! Burlesque are based in Bridgewater  and run by Bertrand and Lianne Vessier. They put on regular shows with performers such as Beatrix Von Bourbon, Anna Fur Laxis  and myself (cough) at the Bridgwater Arts Centre and The Winter Gardens, Weston Super Mare. The next show in November offers a three-course meal alongside burlesque and cabaret performances and a Gypsy Swing band.  I promise not to play the Worm Song…

In Exeter and in Torquay, Kinky and Quirky run by Mark and Sarah Bell, have been offering uncompromisingly top quality dedicated burlesque and cabaret shows since they first started in 2007.  Their shows are always a sell-out and they have everything from upcoming innovative performers to the big names on the national and international scene.  Performers such as Velma Von Bon Bon, Marnie Scarlett, Glorian Gray, Joe Black, Anna Fur Laxis, Missy Malone, Craig the Hula Boy, Ginger Blush, Shirley Windmill and many more have graced their stages over the years.  November 2013 sees them evolving again as they move on from a monthly residency to a quarterly theatrical show and ball – and this time they are bringing over the Burlesque Hall of Fame 2013, Reigning Queen of Burlesque LouLou D’vil as the headliner as well as the winner of their recent Stars In Their Bras burlesque competion performing: Miss Angelique Dominique.

Past Exeter, the show goes on into Plymouth at the far end of England and onward into Cornwall.  The B-Bar at the Barbican Theatre in Plymouth is host to Kabaret Kaos nights, as well as comedy, music and “Forked” performance poetry nights.  They also do excellent thai food if you want to eat your way through a show.

Annabel’s Cabaret and Discotheque, known to locals as the “Kingdom of Night-Time Pleasures” is a cocktail and performance venue that hosts bands, Club Fandango comedy nights, burlesque and belly-dancing all under one roof.  It is also host to burlesque and belly dancing classes, the students of which put on thoroughly enjoyable bi-monthly newcomer showcases as Kittys Dolls Burlesque, which are always a sell-out and have attracted a large local following. You might even see me there once in a while as resident musical dark cabaret act Miss Von Trapp, Devon’s only dark cabaret cellist.

And finally, Cornwall… that remote holiday destination of pasties (the non-sequinned variety), cream teas and beaches also has events. Yes it does.  Sterts Theatre in Liskeard recently hosted MIssy Malone’s burlesque show on tour, Hall for Cornwall has big burlesque events intermittently featuring nationally renowned names and, all the way down in Newquay, the home of the surfboard, the Kiss Kiss Bang Bang Club hold monthly events with acts that mainly come down from that Lahndan, and hosted by Babaliscious of Slinky Minsky.

Cornwall is also home to the fantastic Swamp Circus, the region’s first and only circus training school in the ancient pirate town of Penryn. They do everything from juggling to acrobatics, aerial dance to clowning and stilt walking. They have regular shows, circus clubs and even holiday camps you can send your children to while you enjoy a quiet week on the beach.

The first part of Miss Von Trapp’s guide to cabaret in the South West can be read here. Are there any great shows or venues we should add? Feel free to add them below in the commence.