Getting Legless At The Theatre With Wendy Hoose 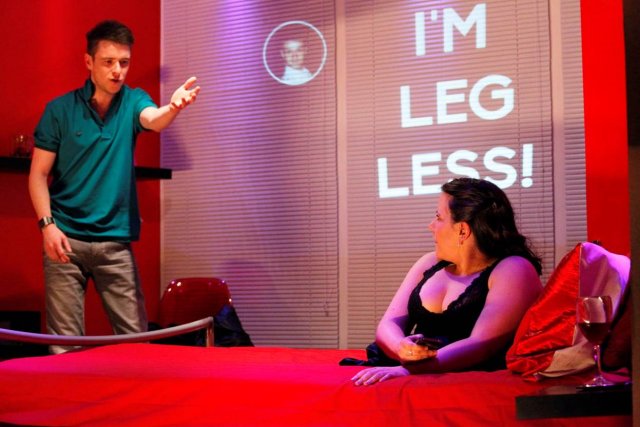 Staged as part of the Southbank Centre’s Unlimited Festival which celebrated difference with a spirit of artistic adventure, honesty and humour, Wendy Hoose provides a fun perspective on modern dating. 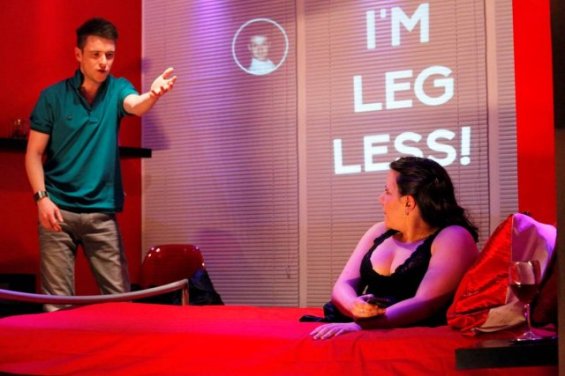 I once met up with someone from an internet dating site who did not mention prior to us meeting that he has cerebral palsy affecting his legs and speech.  As he made his way to my table with two crutches I found myself in an awkward dilemma – am I angry with him for not mentioning it or angry with myself for thinking he should?  This is the same dilemma portrayed in Wendy Hoose, written by Johnny McKnight who co-directed it alongside Robert Softly Gale.  The show received acclaim at this year’s Edinburgh Festival and is shown as part of the Southbank Centre’s Unlimited festival showcasing disabled artists.

Wendy Hoose is set in the Cumbernauld (outside Glasgow) bedroom of Laura who invites Jack over via dating app Tinder “fae a shag”.   After getting through the initial awkwardness of stripping with some cringe-worthy dirty talk , Jack discovers Laura isn’t half the woman he thought.  Quite literally – she has no legs.  Shocked by his discovery and faced with having sex with a disabled person, Jack phones for a taxi.  As he waits they get to know each other and challenge some mutual pre-conceptions.

As I take my seat I am dubious of seeing what some would doubtlessly categorise as a “disabled” play: cue distressing flashbacks to the Channel 4 programmes for deaf people on a Sunday morning that would curdle any hangover with their passé formats and limp budgets.  I note with dismay that the show is presented in BSL – surely I’m not the only one who finds it more interesting to see how one signs, in this case, “do you want me tae poke ye?”  Thankfully the signer is cleverly displayed on the TV screen in the bedroom.  Audio description is provided not just for visually impaired people, but for everyone.  My heart sinks as the describer, Julie Brown, starts describing the set but lifts quickly when she starts adding her own opinions and quips to the scene in the style of Terry Wogan on Eurovision.  This adds a wry humour to the already comic script.  The final special provision of animated surtitles proves useful for all of us not used to thick Paisley tones.

To label this as a “disabled” play would be grossly unfair – Laura’s lack of limbs may add texture to proceedings but this play has more layers to it than a Viennetta dessert covering as it does issues around gender, socioeconomic class, disability, online dating pitfalls, and Scottish culture.  The script is from a very masculine Scottish viewpoint and it would be interesting to see how a female director tackles it.

The flyer describes a desire to “avoid anything remotely PC”. This can come across as desperation to shock but fortunately James Young as Jake gives his character an endearing innocence that makes his opinions seem honest more than anything.  Young plays opposite Amy Conachan who actually has minimal legs – no special effects required.  Conachan plays Laura with a forthrightness covering the vulnerability a disabled woman feels leaving her door open to a stranger for sex.  The kissing is bland but otherwise they brew a good on-stage chemistry.

Try to put aside any inner cringing when you see this – you won’t be sitting through 75 minutes of people demanding more ramps.  Packaged in innovative staging, this is a clever and endearing script that touches on universal issues.  The wry Scottish wit will make you laugh and amongst the humour you might find some of your preconceptions challenged.  As for my date, when I looked past the crutches I discovered a tedious narcissist; I left after the first coffee.