The Devil In Miss Hope Springs 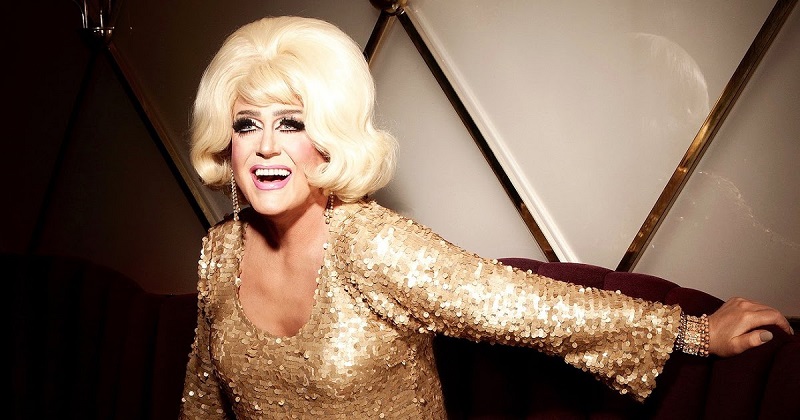 Hold the front page! Miss Hope Springs is back in town with a new show offering fresh insights into her eventful past. Regaling the audience with tales from her earliest days as a Las Vegas showgirl in the 1970s through to the present, she has enough stories to entertain even the most avid of celebrity watchers.

This time around, her eponymous plea is The Devil Made Me Do It (a likely tale). Whoever it is that is pulling her strings seems to be doing rather a fine job of it because, as well as being a critically-acclaimed performer, her mantlepiece is heaving with prizes, not least Best Cabaret Brighton Fringe 2011, The Stage’s award for Best Cabaret in 2013, and a spot on the shortlist for the London Cabaret Awards in 2015.

Away from the piano, her alter ego Ty Jeffries (the son of Lionel Jeffries of Chitty Chitty Bang Bang fame who directed The Railway Children) is just as impressive. Six-foot two in his socks, he trained as a pianist at The Purcell School of Music in Hampstead and modelled for Jean-Paul Gaultier and Comme Des Garcons before returning to music playing piano and singing at venues including the Kensington Roof Gardens and The Ritz. As a youngster in Hollywood, he was no stranger to celebrities whether having dinner with Frank Sinatra or dancing down Sunset Boulevard with Fred Astaire.

While Hope was off taking her time powdering her nose before preparing for her upcoming London show this Friday at Wigmore Hall, we had a word with Ty about the new production.

Tell us a little more about what we can expect from your latest show.

The new show is called The Devil Made Me Do It and, as ever it has the fading beauty, ex-Vegas showgirl turned nightclub chanteuse Miss Hope Springs playing the piano and singing songs from her self-penned repertoire of vintage style toe-tapping show tunes and smouldering torch songs, interspersed with hysterical stories from her Ritz to the pits life.

The original songs are inspired by the great American songbook of yesteryear and composers from Bacharach to Kander and Ebb and artists from Peggy Lee to Bessie Smith. I am seated mostly at the piano when I perform…So I call it sit down comedy as opposed to stand up.

What was the inspiration for the show?

My fascination with old school Hollywood and its denizens is the source material but I am also inspired by my own life as well as the glory days of light entertainment and the women who inhabited it.

Miss Hope Springs seems to have stepped off the stage of the London Palladium circa 1972. She is my muse and my interface with the world as an artist. I call what I do “gender trompe l’oeil”. It has been said that Hope is a fully formed character with an intricate backstory (in the same vein as Dame Edna and Lily Savage, I suppose) but don’t come expecting a traditional “drag” show; this is character driven comedy with a very serious musical element. I was classically trained as a pianist and composer at the prestigious Purcell School of Music and also have a BA in Performance Art.

I am always writing new material for Hope. She can be very demanding!

Are there any new songs you’re looking forward to playing?

There are a number of new songs; there always are. It’s a Love Song is about Hope’s unconsummated love affair with Barry Manilow and very much like something Barry would have written. Hope has a thing for men with what she calls a certain “understated masculine energy…Like Liberace”. I am always writing new material for Hope. She can be very demanding!

What would your father think of your show? Did he approve of cabaret?

My father Lionel Jeffries was a big fan of good cabaret. He was great friends with Danny La Rue – in fact, he played Horace Vandergelder in Hello Dolly opposite Danny as Dolly in the 1980s. Dad and my mother used to go to Danny’s club in Hanover Square back in the 60s.

Diana Dors was also a dear family friend. I saw Diana when she did her cabaret show at Country Cousins in Chelsea back in the day. She was a really marvellous singer as well as a lovely person. My parents became her godparents when she and Alan Lake converted to Catholicism sometime in the Eighties. So Dors is my god sister (if there is such a thing). Hope has been compared to Diana and I was certainly inspired by her look when creating Hope.

So, yes, both my mother and father were big cabaret fans. Sadly, my father never saw my work but my mother and sisters often come to see the show

These days, one can be a celebrity with nothing more than an inflated ego and inflated body parts.

How has the culture of celebrity changed since your father’s day?

Well, it’s less ‘culture of’ these days and more ‘cult of’, isn’t it?  I think back in the day, certainly in the Fifties and Sixties, in my father’s showbiz heyday, people either got infamous, for being criminals, or famous for being good at something. Talent came into in those days. These days, one can be a celebrity with nothing more than an inflated ego and inflated body parts.

Do you have a particular process when creating new shows?

When I am working on a Hope project, certainly. It’s always driven by the songs and the story. Revealing more of Hope’s back catalogue of musical numbers “from the archive” and telling more showbiz tittle-tattle from pool party romps with Goldie Hawn to tête-a-têtes with her long time showgirl bosom buddy Kel Surprise.

The fabulous Rula Lenska and I work together sometimes, she would play Kel divinely, and we have something up our sleeve for later in the year.

How did you go about choosing Hope’s stage outfits?

Hope has a very limited wardrobe. It’s more about what she doesn’t wear than what she does. It’s all part of the back story. She left The Pink Pelican Casino in 1972 (just as it was being dynamited) with a handful of costumes.

I have one clearly defined look for Hope now, a bit like Charlie Chaplin or Buster Keaton had I guess (just with better legs). It’s far more about the music and the lyrics, the illusion that is created and the story that unfolds. She is a real person to many, and that’s fine by me because she is very much a real person to me too.

What are you up to after the show?

After the show? A large glass of Sauvignon Blanc would be nice if you are buying!?

I’m lucky to have been embraced by the world of classical music. I played the Branscombe Festival in Devon last year and I am thrilled to be playing the Wigmore Hall this week and doing a show for The London Song Festival in the autumn as well as holding a song-writing masterclass for them.

I like to think there’s always something new around the corner. I toured the USA coast to coast with a lot of success in 2016 and I’m touring the UK through June and July this year with this new show taking in Bath, Deal, Milton Keynes, Brighton and finishing back in London at Wilton’s Music Hall.

Are you taking the show up to Edinburgh?

No, I’m not going to Edinburgh, I had a wonderful time up there in 2014 but feel I have done it and it’s a great showcase – but I’m not really someone who cares to repeat things. But ultimately I guess I am rather like Hope herself, occasionally I like to pack up my ‘suitcase of dreams’ and head for new horizons…

Edinburgh’s loss is everywhere’s else’s gain, it seems. Miss Hope Springs is at Wigmore Hall this Friday and is back again in London on 12 and 13 July at Wilton’s Music Hall. Details of all her tour stops can be found on her website.