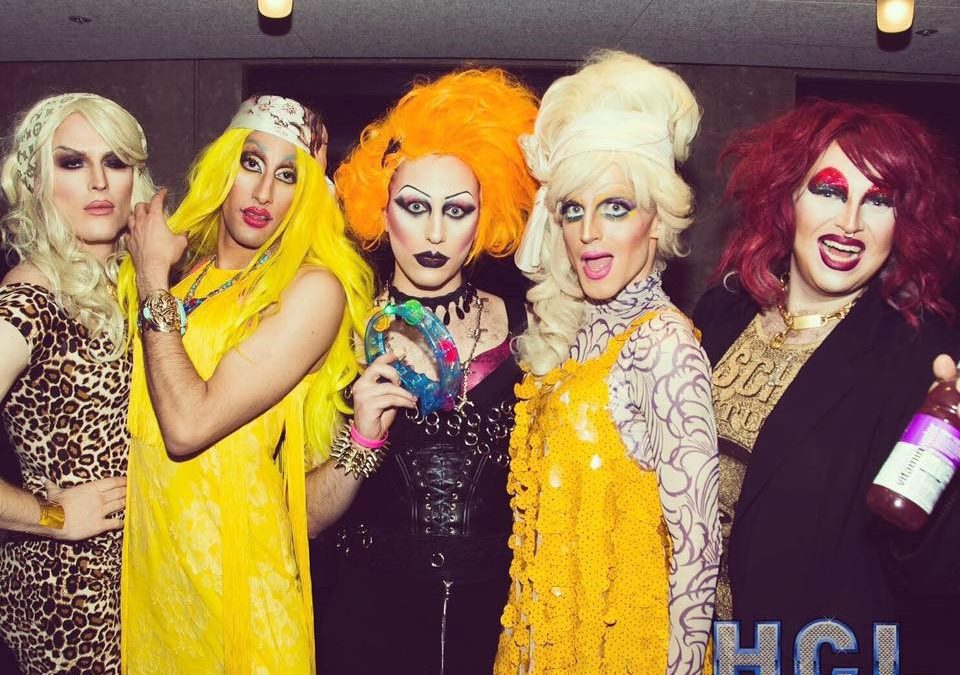 Formed in 2010, drag girl band DENIM has transformed from Cambridge University’s first and only professional drag troupe to an award-nominated supergroup who have toured the UK and shared the Glastonbury stage with Florence & the Machine.

Stylish, hilarious, talented and intelligent, DENIM is a tour-de-force formed by lead performer Glamrou, Crystal Vaginova, Electra Cute, Shirley du Naughty and Aphrodite Jones. We sat down with Glamrou to talk about their journey so far and their ongoing Live at Zedel residency.

How did DENIM come about? Why did you want to start a 90s girl band?

Denim started in my second year studying at Cambridge. I wanted to throw a queer club night where gender expression and deconstruction were prioritised, regardless of sexual orientation or anything like that. There was an LGBT night at the University, but I wanted to throw a night that was about creative queer expression outside of pure sexual orientation.

As for the 90s vibe: we played lots of 90s tracks in our first event and there’s something so joyfully lame about the 90s aesthetic, not least double denim (ahem!) and hilarious group choreography in the pop groups and tacky music videos. DENIM is about unadulterated joy, and the 90s aesthetic is something we’re inspired by; 90s pop artists just relished the camp pop aesthetic without fearing seeming lame, which is what we like to do.

What’s it like working as a group? Is it hard working with so many big personalities?

Ha! I’m afraid to bore you with a non-scandal response but we are first and foremost best friends and, as a queer collective, really believe in the power of collaborating and devising. So the big personalities all rubbing heads is part of the joy with our creative process. But of course little disagreements come about here and there, but I believe in the power of argument and “productive conflict” for opening up everyone’s perspectives collectively. We also have an incredible director Jess Edwards, and Roger Granville and his production team to help us out – so all five egos are well and truly managed by a pretty incredible team.

“I love our shows that don’t preach to the converted and which genuinely surprise drag sceptics in the room.”

DENIM is an all-singing, all dancing girl group, which is rather unusual in the drag circuit. Not to mention every member of your group have incredible voices. Do you all come from a theatre and performance background?

Aw, very kind to say! We appreciate that. It really is our aim to show that drag performances can be really skilled and well-executed to surprise people who might doubt the quality and talent of a drag show. So many people have said to us – “that’s cool that you actually sing. Wouldn’t have expected that”. I love our shows that don’t preach to the converted and which genuinely surprise drag sceptics in the room.

In terms of backgrounds: in some capacity, yes. Most of us met doing drama and music as extra-curricular activities whilst studying at Cambridge, so it is a shared interest that brought us together, but no one has been professionally trained in performance.

“We are very aware that we are five men thinking about femininity.”

You put a lot of thought and work into your performance and it seems that, whenever DENIM is on stage, you’re here to tear the house down.  Are you here to challenge mainstream drag which sometimes rely on looks and charisma?

Definitely. I have to say that I am a bit disappointed by a lot of drag out there which seems to be all about serving face, and not saying anything political. There is an infinitude of options out there for a drag queen, but our personal belief is that if you are bringing a lot of people into a queer space or story, you have to use it as some sort of action for change.

We use music and comedy and self-expression to show people a queer way of life and how it can be joyous. I get frustrated when I see drag that simply wants to replicate fashion ideals but little els. Also, we are very aware that we are five men thinking about femininity. So we don’t ever want to exploit feminine images without critical politics and reflection on what we are doing, and very much see drag as a feminist ally. Our queer female director Jess Edwards is essential to helping us keep this conversation ongoing.

We love that DENIM unapologetically celebrates diversity and fluidity. Is it true that two of your members are heterosexual men?

It’s true! Gender and sexuality aren’t intrinsically bound; I think both members feel genderqueer but don’t identify as so in their sexuality. It’s funny how surprising this is to people. When I’m in drag, I’m rarely ever thinking about my sexuality anyway as I quite literally cannot have sex in drag (my penis is taped away). For me, it’s all about deconstructing and playing with my gender, and not too much about sexuality.

Your residency at Live at Zédel is going really well, with many shows selling out. What’s the experience like?

It’s lovely that there is such a regular audience for what we are doing! And as I said earlier, I love not preaching to the converted with our shows, and it feels really rewarding when we see Zédel customers who don’t feel that comfortable with drag suddenly standing up applauding at the end of the shows. It’s like we’ve snuck in with a Trojan horse to mess things up from the inside.

“A lot of drag out there is losing its political edge.”

Like you said drag is and should be political. Your show at Zédel is about the DENIM girls running away on the Titanic after all the queer spaces in London are destroyed. Do you still have hopes for the queer scene in London?

Of course we are hopeful but it can’t be denied that queer spaces are disappearing alarmingly quickly, that there is a rise of masculine culture among gay men, and there doesn’t seem to be much collectivity in the gay community anymore (in fact, lots of internalised homophobia and racism). A lot of drag out there is also losing its political edge, which I think is symptomatic of what is happening to the gentrification of queer culture in London. My hope is that LGBT venues reclaim their queer, inclusive quality which we need now more than ever, and that queer performers around the city remember that drag has to be first and foremost political.

Your debut music video has been nominated for best music video at Raindance Film Festival 2016 and will be screened at Fringe! Queer Film & Arts Fest. Do you see yourself doing more projects like this?

There’s no stopping DENIM so what’s next? Any plans to conquer the universe soon?

We’d like to achieve intergalactic travel but before that we are extending our run at Zédel next year, taking over Vault Festival in March for a week and collaborating with lots of other queer performers. We are also doing a UK tour, as well as developing a feature film Denim drag musical as a 3 year plan.

DENIM are currently performing at Live at Zedel until 11 December 2016. For latest tour dates, visit their official website http://www.denim-uk.com/