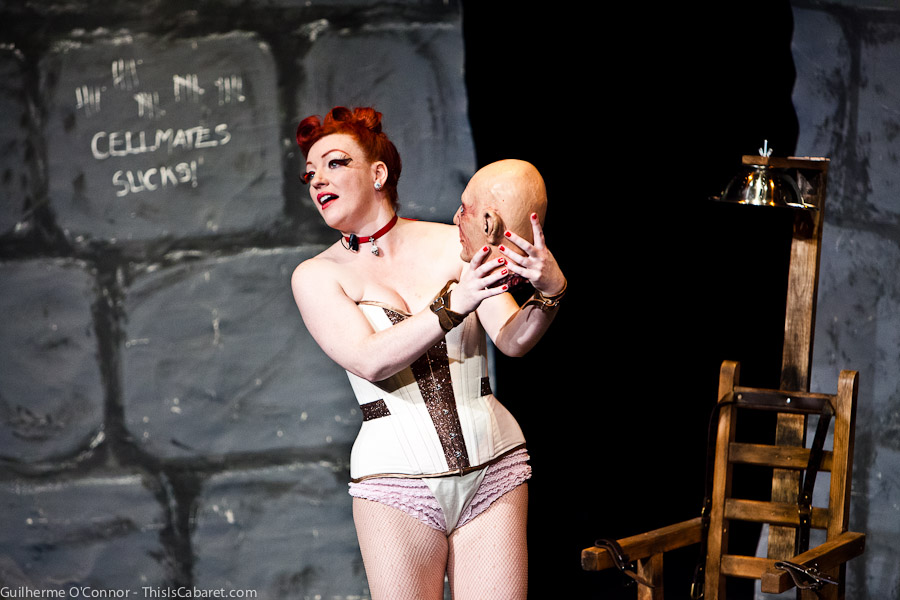 A recurrent burlesque performer at variety bills all over the UK, Crimson Skye has also taken her one-woman show Death Row Diva to a number of theatres in Manchester and London. Earlier this year, West End hit Jumpy employed her as a burlesque consultant. Franco Milazzo talks to the multi-talented artist about drama, cabaret and the grey area where the two meet.

Would you describe Death Row Diva as theatre or cabaret?

It is very much theatre. I come from an acting background, and wrote it to show off my acting as well as my recently found cabaret skills. The first routine I devised was Crazy, in 2006. I sing Patsy Cline in a straitjacket and Hannibal Lecter mask, revealing Ed the Severed Head towards the end. I don’t twirl tassels or take anything off, except for the straitjacket. Death Row Diva grew out of that act, became an hour-and-a-half monologue.

Your burlesque background stood you in good stead when West End hit Jumpy enlisted you as a consultant. How did you land that position?

Jumpy‘s writer April de Angelis saw my Gimp routine as part of Tournament of Tease, at the Bethnal Green Working Men’s Club. Like Crazy, it is not exactly a cheesecake number. De Angelis loved it, and was inspired to include a burlesque act in her play. I love that, after seeing my performance, she wanted hers to be highly inappropriate and funny.

Although Tamsin Greig’s character says “burlesque is posh stripping”, just like every troll on the subject, I was touched by the way that Jumpy‘s audience see anything but a posh person stripping. To see them hooting and crying with laughter was one of the best moments of my career so far.

What are the biggest differences between mainstream theatre and cabaret shows of a comparable scale, for example The Hurly Burly Show?

None, other than public perception. Shows like Hurly Burly, with a heavy slant on burlesque, are more like musical revues. There is an audience out there for burlesque, but the marketing, especially in a recession, has to appeal to a much broader public. The current West End revival of Cabaret can only help our smaller shows. It tells the wider public that cabaret is not a dirty word, that we are not cheesy entertainers but highly original, inventive performers, as the Cabariot campaign shows.

Does that “posh stripping” dismissal of burlesque affect perceptions of variety as a whole?

The reason I love cabaret and burlesque is that it is an entirely original form of entertainment. I know we all moan about seeing the same theme in burlesque routines, but that’s missing the point. While some of burlesque is unoriginal and a variation on a theme, by far the majority is highly original. The artists, both male and female, have clearly spent time listening to their music, getting the costume together and showing the audience acts that are genuinely surprising, funny and above all else entertaining. I’ve seen performers turn themselves into every shape, gender and creature. I even saw one perform a fat Prince routine while eight-months pregnant, and have never seen an audience so gobsmacked when she revealed her huge bump. This is stuff you can’t see in mainstream theatre because it is off the cuff, right there, right now. 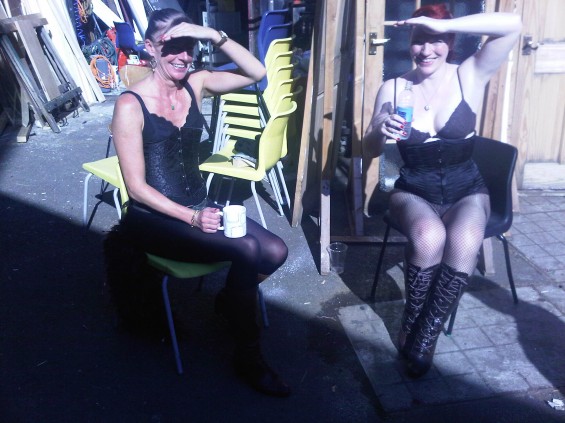 The Guardian says fringe theatre has much to learn from cabaret. Do you agree?

I do agree. We have the edge on fringe theatre because we use performance spaces in ways that most productions wouldn’t think of. Cabaret shows are becoming much more interactive and inventive in their use of space. Bigger venues are not trying to find new ways to use their space.

Can you think of any examples?

The Roundhouse has always been at the forefront of innovative shows, from Circus of Horrors in the past to the upcoming Fuerzabruta. The Lowry in Salford has been especially adventurous and taken massive risks with their programming. Without the support of The Lowry, I would never have had a chance to try out a show no one had ever seen before. London’s Jacksons Lane is also branching out of its traditional remit of being mainly a circus showcase venue, and including a lot more cabaret – and people are coming. There is an audience for cabaret, and they want more than classical theatre.

What can cabaret learn from theatre?

What I’ve really loved whilst working in theatres is the technical support. There are very good stage managers in cabaret, but they are few and far between. In the theatre, the tech guys take pride in their work, and are just as upset if something goes wrong as I would be if I forgot my lines. I do miss that. Once I arrived hours early to sound check and then, on the night, the tech had removed all the monitors. I couldn’t hear a thing! Spaces that say they are proper cabaret venues have to invest in good stage managers and sound tech.

Cabaret is the only art form that benefits from chaos. We can work outside what is seen as normal, but we need to be careful with our marketing. I have problems with the word “burlesque” being associated with Death Row Diva: someone who saw the show was upset that there was no nudity and no strippers. Now I don’t use it in my blurb, and go along the “comedy theatre” angle, although I can’t deny that the show came out of burlesque and that I am still a burlesque performer. It shows how tricky it is to get the perception right.

Photo credits: Gui O’Connor (Death Row Diva), exclusively for This Is Cabaret; others courtesy of the artist