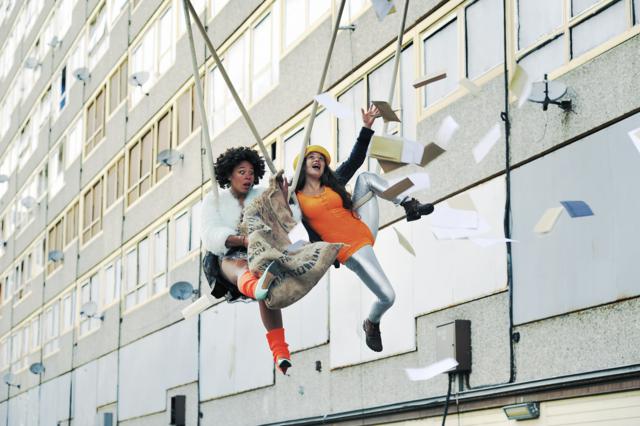 In the Magic Mirrors Tent at the Roundhouse, Collectif and Then…, new Roundhouse Circus Associate Artist, present the enchanting Lost Post, a show inspired by the short story The 6th Borough by Jonathan Safran Foer.

An engaging initial sequence sees Francesca Hyde gearing the audience up with a makeshift loudspeaker as she introduces Hank, who will apparently perform a stunning dive across a river without getting the slightest bit wet – immediately we are immersed in Collectif’s appealing world of make-believe, in which the stage itself becomes the river and Raphael Perrenoud’s acrobatics the tumultuous dive.

Letters between Hank and his beloved back at home are then read out, while Lucie D’Duhirahe and Perrenoud mime a couple gently wrestling, exploring boundaries and bodies, turning themselves into a playful human sandwich. Stéphanie N’Duhirahe soon enters the ring, laden with those old-fashioned suitcases modern circus productions seem to find so irresistible, rather like the bag-lady in Labyrinth. She squirrels about the set purloining objects for her collection, entering into a wonderful game of chase with Hyde over a stolen letter, which the pair take up the corde lisse, struggling up and down one another’s bodies in the attempt to get the upper hand. Here slick manoeuvres are beautifully disguised as clambering and tussling, just as below Perrenoud’s graceful tumbling becomes ever more erratic, his flips and somersaults turning to tumbles as his athletic prowess continues to fail him. The centre piece of the show is the cloud swing duet between Lucie D’Duhirahe and Hyde, and it’s an impressive piece of circus, in which Hyde is at one point lifted by nothing but her ponytail, and culminates in an aerial somersault that draws gasps from the audience.

The theme of Lost Post is explored with striking images, such as the invention of the telephone, its cord stretching across the ring and linking through ties and bras, even through Hyde’s plaits as she dangles from the cloud. A parallel is drawn between the lost letters and the Hank’s lost aptitude to dive, but it gradually becomes clear that what the characters have really lost is the ability to connect. The show finishes with a delightful solo on the
corde lisse by Stéphanie N’Duhirahe, ending in a front balance slide down to join the others on a boat they have improvised from the various bits of set – a floating island of hope in the middle of the ring.

This is a charming slice of circus, replete with moments of wonder and magical ideas.