Circusfest 2014 Review: She Would Walk The Sky 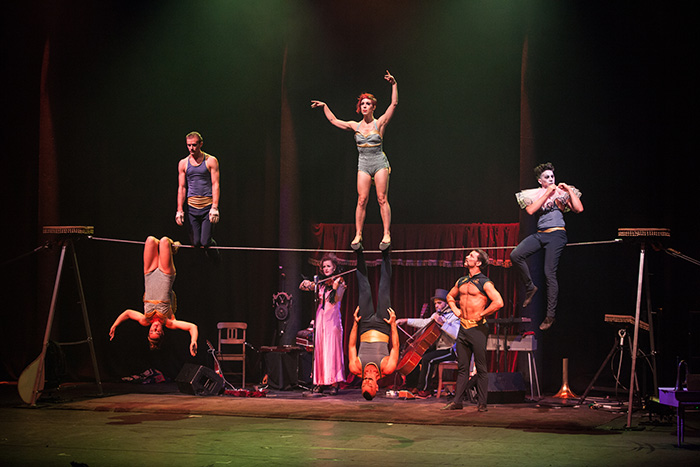 Circusfest 2014 rolls on with She Would Walk The Sky, a large-scale production featuring some faces from London Wonderground’s 2012 blockbuster Cantina. 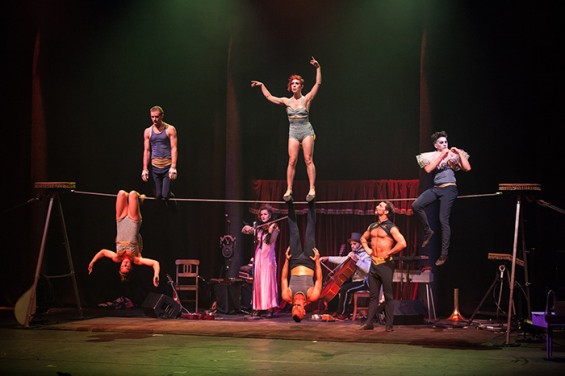 She Would Walk The Sky continues until 17 April.

“We worry about gravity – so you don’t have to…”

A be-ruffled clown, a ramshackle circus family and the screaming signifier of the ‘trapped bird’ trope fill out the cast of Company 2’s She Would Walk The Sky. The strongman’s distant love, told through a confused and sometimes jarring voiceover sews together exceptional circus skill and live music as a centrepiece to The Roundhouse’s Circusfest 2014 offering.

Floating above each set piece, however, is Finegan Kruckemeyer’s incoherent poetry. Spoken at times by Kane Peterson (a John Gilkey-like host), the tale is thankfully not core to the show’s spell.  It is often preaching, decadent in frothy exposition and asking us to yearn for characters we have barely met. Silencing the storyline and simply taking in each set piece is a far more rewarding experience.

Directed by Cantina‘s Chelsea McGuffin, Company 2 are a zoetrope of talent. Each performer weaves throughout the show, both acrobat and prop master, slipping from forefront to watchful “gatekeeper”, shimmering in their allotted solo pieces.

Alex Mizzen’s bird-like performance is extraordinary, a complete study of body control and transformation. As a main character in the story of The Red House, Mizzen’s early departure from the brood spells a switch from traditional circus family to stormier seas. The audience is constantly informed that “birds are merely clocks with feathers” but Mizzen’s performance has made us privy from the start. Everything we need to know about “The Distant One” is signified clearly by her elegance and clarity of movement, with no need for a redundant, spoon-fed voiceover.  A hand-balancing sequence is beautifully lit, the level of control enchanting the vast Roundhouse space.

Interestingly, Mizzen not only performs acrobatic skills as deftly as she can dance, she makes her en pointe moments as heart-stopping as her acrobatics.

The ensemble are multi-skilled with a strong acrobatic core, tight-wire runs throughout the performance both in set design and storytelling. Criss-crossed wires populate the stage, culminating in human juggling from wire to wire, cycling and carrying cast members across and up, from shadow to light.

Continuing his association with McGuffin, Mozes yet again wraps an audience around his little finger. A nearly silent room focuses on his every breath as he grunts through a trapeze act. An efficiency of movement, from trick to trick, punctuated by exclamations of rage and frustration. Mozes’ dexterity as a performer however is problematic to the tale, raising questions over who he is and whether he is a different character upon each return to the stage?

Supporting the soloists are the “gatekeepers”, uniformed with tarnished blue and gold complete with waxed moustaches. A balance bike is pedaled through the audience, the teeterboard is used to launch each other up and above with repetitive frequency. Traditional skills, often lost in the race to be the next “new trend” are championed, amongst a dusty, timeless setting.

With an incredibly talented cast, a beautifully detailed set and continuing commitment to skill, Company 2 have created a strong contender for performance of the festival. She Would Walk The Sky despite its communication troubles is a delight to see, an experiment within strong technique.