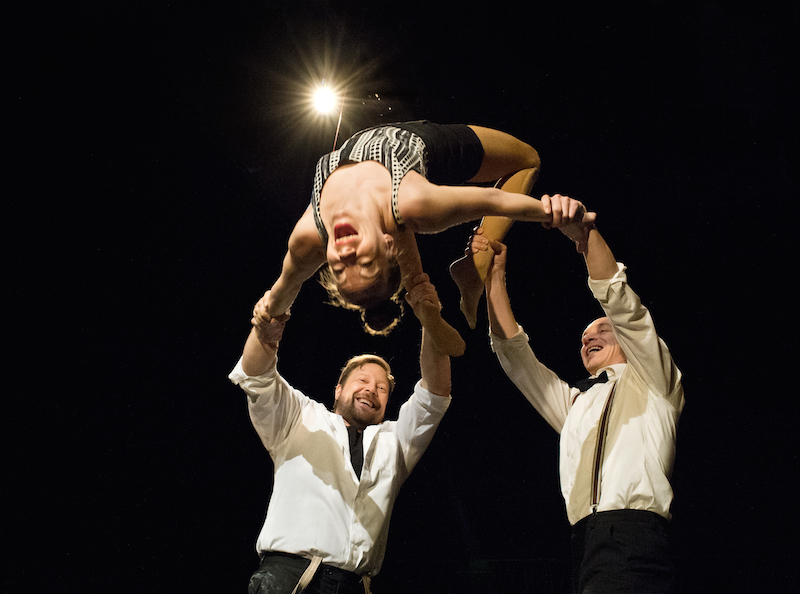 Sceno is a new work from Agit-Cirk, directed by Sakari Männistö, also known for his work with Gandini Juggling. It premieres in the UK at Jackson’s Lane theatre as part of Circus Fest 2016, and the show is a blend of strongman tricks, acrobatics, live music and humour. From its beginning Sceno feels like it is experimenting, attempting new things, inverting roles and not relying on staple moves.

The evening starts with some clowning from Sampo Kurppa, followed by acrobatics from Jenni Lehtinen, Saku Mäkelä and Sasu Peistola. There are lots of nice interactions between the performers as well as poetic solos from each of them. Throughout the show, Sceno also features a good amount of something that’s increasingly appearing in contemporary circus shows: performances where the male body (in this case Mäkelä’s) is mercilessly and repeatedly slammed on the floor in broken acrobatic moves, most of the time to very little or non-existent music. A few months ago we saw that as the core of Aneckxander, and The Return  also featured a fare share of this particular trend – a seemingly painful, sometimes funny, deconstructed acrobatic dance where the focus is on the sound of flesh and muscles hitting the ground in an exercise that puts the impetus on honesty, raw bodies and the physical reality of circus.

That very honesty remains present throughout the entirety of Sceno, as even though some elements feel disconnected or randomly arranged, the show always feels intimate and never artificial. Some scenes serve no other point that to create nice, poetic images. Lehtinen spins around wearing a hat made of beads, which fly around her in a section reminiscent of some of the aerial performances in NoFit State Circus‘ Bianco. It’s one of those moments when you find yourself thinking, “What does it mean? I don’t know! But I think I like it…”.

Other scenes let go of all visible circus to focus on physical theatre and feel rather disconnected from the rest of the show, as well as quite long. Yet those were still very good at conveying a convincing atmosphere.

Sceno manages to feel very varied on stage whilst also remaining true throughout to its created universe. The black and white costumes and use of stark lighting, as well as a long wall divider as a stage prop, set the scene for a world that feels both stripped down and sophisticated; both neutral – when it feels like a blank acrobatic page – and ultra-specific, when it turns into a silent black and white movie. Similarly the music oscillates between up-lifting acoustic ukulele and ominous end-of-the-world style buzzing, creating a bizarre yet consistent soundscape. The show has no difficulty in switching very quickly between moods and tones and remaining convincing throughout.

In terms of the acrobatics, the handbalancing is perhaps a little too safe and seems to lack confidence at times. It is, however, performed on canes set on wheels which gives the piece momentum and fluidity, and is performed to live sound which lends it added dimension. The highlight of the show is the human juggling, as Lehtinen is tossed and thrown by Peistola and Mäkelä. This finale is the best example of team work in the show and is truly scary when Lehtinen’s face brushes only centimetres from the floor.

Sceno is Part of SIRKUS, a showcase of new work from Finland, which includes three exclusive premieres supported by Circus Info Finland, The Finnish Institute in London and Jacksons Lane.