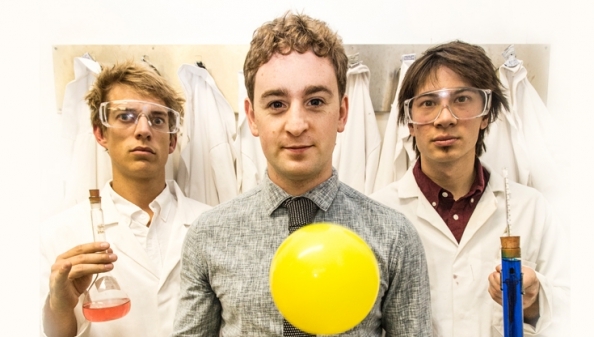 Part lecture, part performance, Beta Testing is full of in-jokes and geeky reference points, but told in an inclusive way that makes sure the audience is at all times part of the action. Much of the show is proving to the audience that there is no trick in the tricks, no illusion or falseness, just hard work, an obsessive disposition and a love of the art of juggling. A really really great love of the art of juggling. Did I mention there was juggling? Well there is – lots of it.

Starting with some five ball endurance, the three performers take you on a tour of object manipulation, showcasing the different skills and at times mixing them all together. This show is just as much about the juggler as the juggling and what it is like day to day living and working at something that to the wider world can seem like a joke or at best a hobby – not something serious, or something that can matter deeply to someone.

There are a lot of genuine moments, some impressive skills and some great outright funny routines; in particular the dead fish is a wonderful comic piece of theatre. That said the show could be developed further. At its best, it embraces the lecture aspect fully and invites us to see the world through someone else’s eyes; however, the inclusion of some skits feels less unique to Circus Geeks and a little more familiar circus territory. It also asks the audience to change position from inside the fourth wall to outside of it and this can be jarring – as if it is no longer clear what is expected of you. Are we onside with our hosts or watching them?

My favourite parts of this show are when the explanations work hand in hand with the performance. For many people it is very hard to distinguish some parts of juggling to others. Much of it just looks, well, “hard” if only to the casual observer. Breaking down the tricks and talking the audience through them is an effective way of building an appreciation and an anticipation for what’s next. This works particularly well during a piece about modern juggling lexicon.

Another example is the the routine Red/Green, which is a variation of Red/Blue created by the late Luke Wilson under Creative Commons and free for anyone to use. It involves a series of technically perfect throws of different rotations shown by the two colours. This is taken one step further here by the change of colours, as it is performed by someone who is colour blind.

The pace of the show never lags and it feels a great shame when it comes to an end. Arron Sparks graduated from Circus Space (sorry… the National Centre for Circus Arts) in 2008 and Matt Pang and Jon Udry are also still fresh faced. Sparks has been commissioned by the Glastonbury Festival to create a second show Down-UP and with some funding from The Arts Council coming in, this company looks set to grow into their own voice and find their niche. The mixture of technology, statistics, blogging and social media to document their skills integrates circus into the modern world; this is a very 21st century approach to an age-old art and one that shows plenty of promise.