Circus Review: A Night Of Gravity 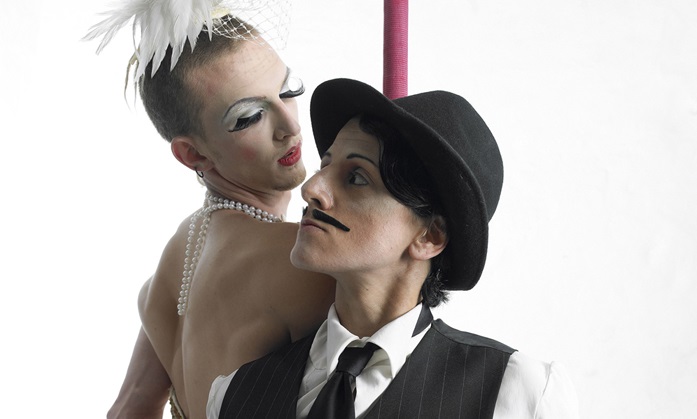 A Night of Gravity, the gala for students graduating from the 12 week intensive aerial course at Gravity Circus Centre, sees them performing alongside their teachers and, while the students don’t eclipse their masters, the sell-out crowd is a very warm one and the acts are strong.

The proceedings are left in the capable hands of Fred Bear. He gets the audience onside early by bribing them with cake, and then later has them in stitches with his confident compering. His two “bearlesque” acts are great, especially the second – a comic tribute to Flashdance featuring a timely bucket of water.

In most circus cabarets you would expect to see only one or perhaps two aerial acts if any at all. Tonight, with the exception of Jonathan Finch’s proficient hand-balancing routine and Fred Bear, the whole cast are high above us. Great news for those who are really into aerial; although, as seven of the performances are rope acts it does mean you have to really be into rope to enjoy this particular bill.  It’s a shame that there is no hoop, trapeze or one of the more niche disciplines like net or chains to balance it out.

Having said that, all of the acts have their own flavour, whether it is cheeky pin-up, horror or outer space. Alfa‘s use of a short rope somehow makes her act feel much more dramatic and dangerous than it is, and is an intriguing way of changing the apparatus. Willy Wagtail‘s act Faun is the best from the students; the comic death at the start gets a good laugh from the audience and his display of strength is impressive.

My favourite parts of the evening are the two double rope acts on display. The first, from Gravity headteachers Leo and Yam, is a comedy character act that features gender-bending film noir, a hidden gun and a great array of what is possible in a double act. There are genuine streaks of humour and it is the first time I’ve seen a performer engage in rope while wearing high heels. The act is well designed and ends very strongly but could use a little editing and sharpening up. As Fred Bear says to the heterosexual men in the audience, “if you’re having strange feelings after that one, don’t worry just go with it!”

It is noticeable though that, of the performers tonight, all are either female or flirting openly with homosexuality or gender play; you do wonder where the straight men are in aerial circus (although admittedly Felipe Reyes performed in the Friday night line-up the previous evening). Will Davis teams up with Wagtail for a final duo act Reach which is wonderful (see below). Showing a couple at a difficult stage, or the end of their relationship, it is full of lost empty moments and beautiful positions. It’s a great way to end the night.

Will Davis and Willy Wagtail perform Reach as part of A Night Of Gravity.
Gravity Circus Centre is growing and developing at the moment; with their relatively new premises they’ve started teaching a larger number of disciplines and this feels like a school on an upswing. Many of tonight’s performers can be seen at Glastonbury next month as part of The Leo and Yam Show, something that could be well worth looking up.