Circus Maximus: Who Was This Year’s Big Top Winner? 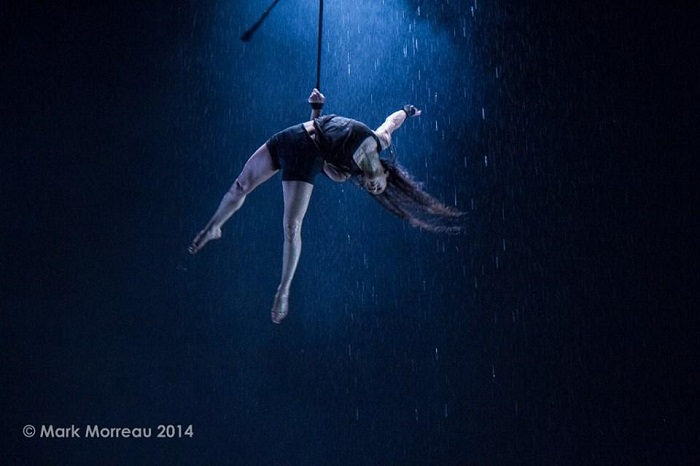 Talent contest Circus Maximus returned to the Southbank’s Udderbelly for its third year on its mission to find the best big top artists in the UK. For a week, twenty acts competed from across a veritable kaleidoscope of disciplines (such as aerial, juggling, hula hoop, handbalancing, contortion, pole, tightrope and slackrope) all hoping to make it to the final on Sunday.

The contest is broken down into heats with the public deciding who should continue. Keeping matters flowing is the acerbic compere Christopher Green, the alter ego of both hip hop’s Original Granny Ida Barr and American country singer Tina C. His wonderful pink suit and not totally politically correct views (“don’t stand in a line children, you look like we’re going to machine-gun you down”) add some classic vaudeville touche to the proceedings.

The big final opened with the judges’ wild card Alula, an exciting Cyr wheel trio involving a fair amount of acrobatics as well as some more traditional technique. The performance wasn’t particularly polished nor was the space quite big enough to allow for all three Cyr wheel artists, but Cyr is a relatively recent discipline in the circus world and it can sometimes feel like it has a vast untapped potential. Alula, using their wheels as a base for acrobatics or to support multiple performers at the same time definitely seemed to explore their apparatus and to experiment with promising possibilities.

Alula was followed by Silver Lining‘s Tom Gaskin performing a gentleman juggler act which, in comparison to Alula, relied heavily on classic tropes balancing vintage styling (a bow-tie and a trunk) and mock-clumsiness as he juggles various props. However, as with all classics, it’s only worth doing if you can do it well, as was the case here. Of all circus disciplines, juggling seems to be the one where the live failure rate is the highest, perhaps because the performers often push their skills to the limit every time. But that’s where showmanship comes in, when mistakes serve to grab the audience’s attention and when a juggling routine feels more daring and dangerous than a perfectly executed trapeze act. There are few clinical routines that could leave the audience wondering if the performer really can stand on a rola bola upon a trunk whilst balancing a ball on a spoon in his mouth and simultaneously juggling four rings? Did he? Of course he did. And he won’t leave the stage before he has done it before your very eyes. Tom Gaskin is a man of great talent as well as a very charming and very persistent one.

Hand to hand duo JD&Nikki featured some very skilled moves but unfortunately it never seemed to achieve a real individuality. Acro routines where both performers are in love and the guy sensually lifts the girl is another classic of the circus world and this act felt all too familiar, though it did feature some nice lifts and scary drops.

Angeliki Nikolakaki impressed with her aerial straps routine performing under artificial rain and lightning for added drama, just in case spinning and soaring through the air wasn’t quite enough. Nikolakaki’s beautiful act felt like Wuthering Heights in a bottle and featured some very fluid and well timed strength-based moves. This is a performance that is also a reminder of what has already been proved by other water based aerial straps act such as in La Soiree’s Bath Boy and Briefs’ Captain Kidd: aerialists are like kittens in that they look adorable when dry, but reach peak attractiveness when wet.

None of these acts, though, won a prize. While Gaskin and Sam Goodburn performed quite similar acts in that they both comfortably fit into the “gentleman juggler” category and both seemed to take real risks to end on a very big “make it or break it” trick, the latter’s routine had a more elaborate set and character, more audience interaction and some very creative use of breakfast food. The man even had the willingness to sacrifice his hat for the sake of art, using his bowler as a makeshift  breakfast bowl to pour cereal and milk into after all else failed. His final trick, riding a unicycle along a row of wine glasses was only added to the act two days prior to the final and certainly was one of the show’s best moments.

There’s plenty more circus from where that came from. The Udderbelly tent will be hosting three special shows with up to 25% off the cost of tickets. For all details, see here.