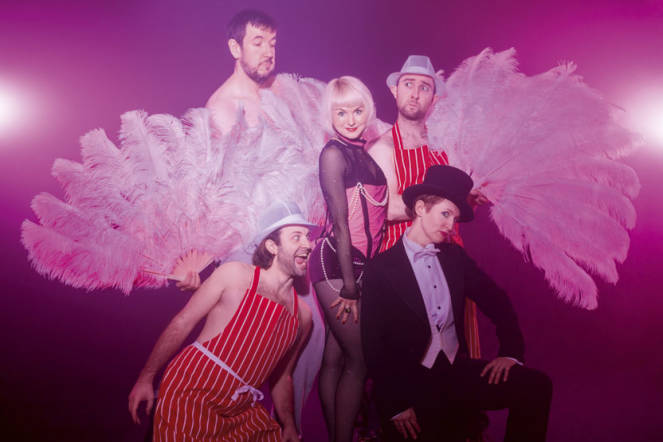 An interesting, novel and funny cabaret-style opera about love, pigs and sausages. 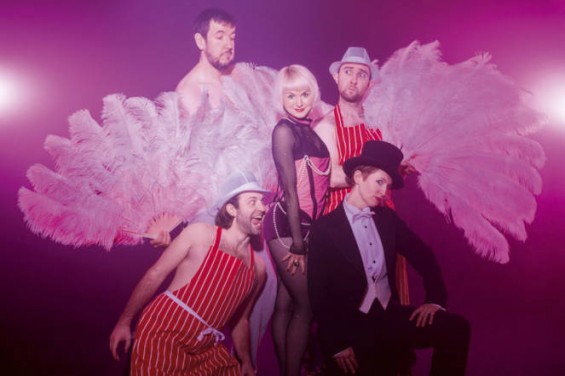 With the tagline “the opposite of love is sausage” cabaret opera Gloria – A Pigtale is certainly a surreal concept.

Gloria – A Pigtale is the first opera presented by Mahogany Opera Group, launched in 2014 to bring together the expertise of two pioneering contemporary opera companies – The Opera Group and Mahogany Opera.

Led by Artistic Director Frederic Wake-Walker, Mahogany Opera Group creates new opera in new ways, stretching the boundaries of what opera can be and who it is for.

The opera tells the story of Gloria, a sweet and naïve pig searching for love. She falls for a butcher, misinterpreting his attentions as romantic, when actually he just wants her head on his chopping block.

Written byGerman contemporary opera composer H.K. Gruber, the piece has been variously described as a Bavarian (sausage) satire, a parody of children’s literature and “a comedy about race and diet”. This production, with an English translation by Amanda Holden, has the tagline “the opposite of love is sausage” – certainly a surreal concept, but if one is a pig, sausage is probably inevitable in the end.

A small and accomplished cast of five singer-actors perform an array of different parts, accompanied by the contemporary music orchestra CHROMA, just visible behind a curtain of sausages, and conducted from the stage in front of a wheeled meat trolley by Geoffrey Paterson. Soprano Gillian Keith shines as Gloria the pig, with a comic and physically committed performance. Tenor Andrew Dickinson is particularly convincing in the myriad roles he plays, from human sausage to Northern butcher. Gloria’s romantic hero Rodrigo “Rodney” the Hog is a big hairy bear of a man (bass Sion Goronwy), but the majority of his sung text is unintelligible.

The score for this “cabaret opera” mixes a variety of musical styles – jazz, blues, Bavarian oom-pah, Mahler and Wagner, with the versatile singers switching effortlessly between vocal styles, accents and characters. Gruber’s highly individual compositional style shows the influence of Kurt Weill, jazz and German cabaret, and draws on the inspiration of 20th Century composers Berg and Stravinsky.

The staging is presented in the Epic Theatre style of celebrated 1930s German writer and director Bertolt Brecht – his polar opposite response to the naturalistic Stanislavski school of theatre (later made famous by Lee Strasberg in the U.S. as “Method Acting”).

Brechtian staging has always worked well in opera and cabaret – art forms that are anything but naturalistic. The Epic Theatre techniques used here are particularly effective; using audience alienation techniques such as narration, performers breaking “the fourth wall” to talk to the audience, large gestures, very physical acting, and visible costume and prop changes that are part of the performance all help to remind the viewer that this is not real life.

Staging a performance in this style seems to allow more of a platform for the surreal, creating some very interesting moments. During an orchestral intermission there is a delightful set piece where two characters use a variety of hand and foot pumps to inflate a bucketful of pink plastic pigs, with wonderful physical comedy. Other highlights include yodelling frog hand puppets serenading Gloria the pig – perhaps a nod to Kermit the Frog and Miss Piggy? Holden’s translation includes some fun pork-themed witticisms and black humour, matching well with Gruber’s very individual score.

There are many other comic touches – when Gloria sets out on her search for love, she meets some oxen along the way, who sing Elvis-esque uh-huh-huhs dressed in cow-print onesies. Burlesque elements are used in the costumes and props – pink corsets and tutus represent the pigs’ chorus, along with fan dance feathers and sparkly heels, and narrator Jessica Walker channels Marlene Dietrich as she lounges languorously with cigarette holder in hand, dressed in a man’s suit and tailcoat.

The storytelling, like the set, is inventive, colourful and fun, with lyrical singing and excellent characterisation. In the ensemble singing sections it is often hard to understand the words, meaning that some plot points and subtexts are lost. This does not lessen the overall surreal joy of the production however.

An interesting and novel blend of opera, cabaret and the avant-garde.

Gloria – A Pigtale is at Buxton Festival 23 & 26 July before touring to the Bregenz Festival, Austria. www.mahoganyoperagroup.co.uk