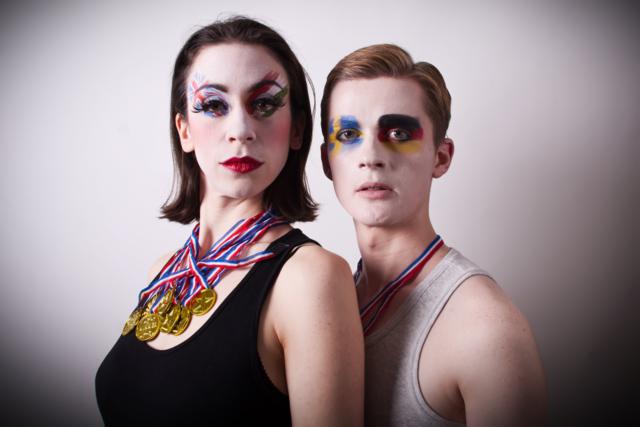 Do glitter and tracksuits go together? Matthew Floyd Jones and Leela Bunce (AKA Mannish and Audacity Chutzpah) adapt real Olympic events to the medium of cabaret. 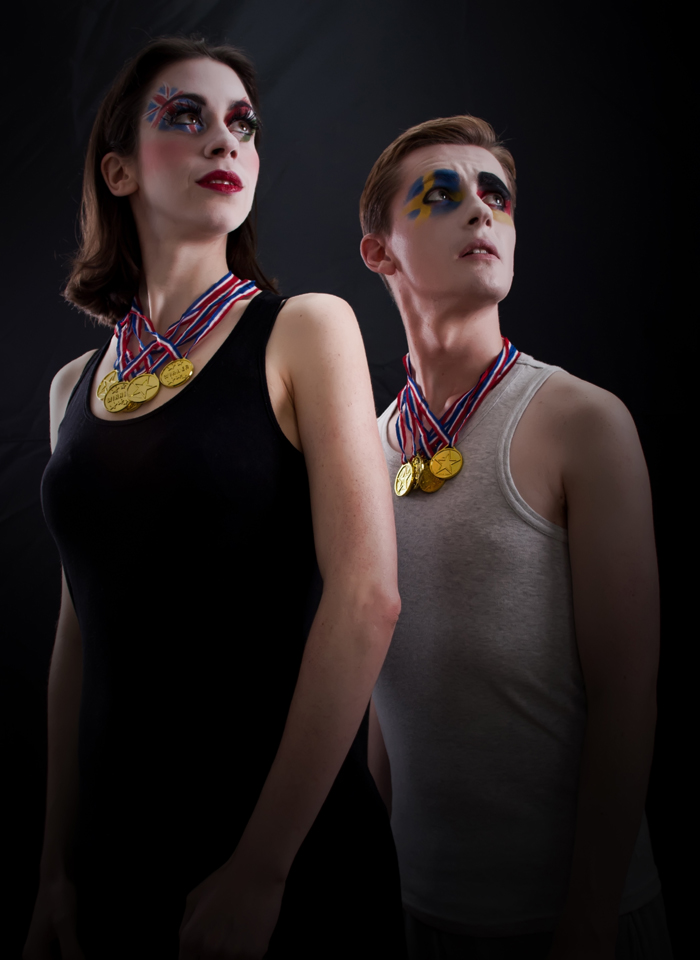 Ask a varied cross-section of the cabaret community as to their disposition towards some form of athletic exercise, and the majority of responses will probably read like this:

“I’m sorry, what? Tracksuit bottoms? Sweating unduly? Fresh air? Sounds like a drag and not the good kind of drag why don’t you rack off and find yourself someone who gives a rat’s arse now pass me that bubbly wine and GLITTER GLITTER GLITTER wha-boom pass out oh God get me on the N29 please there’s a block of cheese in my fridge I need it in my face.”

So, that’s that. It’s unlikely that the healthy, bracing values and inspiring ethics of the Olympics will ever take hold in a performing community that applauds the stealing of drinks from unsuspecting audience members (you know who you are).

We’re not saying cabaret performers can’t be the most decent and upstanding of folk. Fear not, if you’re backstage at Jojo’s and find you’ve left your make-up bag in your bathroom at home – the girls will club together and furnish you with a makeshift collection of spare lashes and lippy. Worry not if you’re leaving Volupté without enough credit on your Oyster for a night bus – fellow acts will offer you a seat in their car, a joyride on the back of their bike, or (most likely) a space in their bed.

As we began work on our Olympic Vaudeville, we got to thinking: what would it be like if cabaret performers were forced to enter the Olympics? Which events would our luminaries choose? We wondered if delicious Laurie Hagen would excel at archery, or demure Ginger Blush at women’s judo? We imagined Spencer Maybe entering the Greco-Roman wrestling (highly recommended). But the more we pictured, the more we enjoyed…the tantalising possibility of a series of sporting events that corresponded to the impressive and varied skills of our glitterati.

Below are five of our suggestions for a Cabaret Olympics, or Cabarolympics, if you will. If we receive enough interest, we will consider holding such an event in the near future.

For now, you must just content yourself with our Olympic Vaudeville, playing at Greenwich Theatre on June 9th and 10th. Read on, and imagine.

SYNCHRONISED SWIMMING
A hybrid form of swimming, dance and gymnastics, comprising the execution of graceful synchronised routines while underwater, either solo, in pairs, or in teams.
Cabaret equivalent: the troupe of gorgeous girls, possessed of perfect precision and the ability to hold their breath for minutes on end in the tightest corsets known to woman.
Notable cabaret purveyor: the irrepressible Folly Mixtures.

RHYTHMIC GYMNASTICS
A dance-based sport in which competitors manipulate ropes, clubs, hoops, balls and ribbons while demonstrating the extent of their flexibility.
Cabaret equivalent: Freaky-ass contortion, usually performed by an impossibly gorgeous, glamorous woman who need do nothing more than wrap her body into the shape of a pretzel in order to get a whole crowd squealing with equal parts horror and happiness.
Notable cabaret purveyor: the stunning Iona Luvsandorj.

DRESSAGE
An equestrian sport involving the display of a horse’s natural athletic ability through a series of elegant movements, otherwise known as “horse ballet”.
Cabaret equivalent: graceful cheesecake burlesque, of the sort that tends to be maligned by cabaret snobs, but when executed with style and star quality can still be as scintillating as seeing Marilyn Monroe blow a kiss.
Notable cabaret purveyor: the beautiful Honey Lulu. 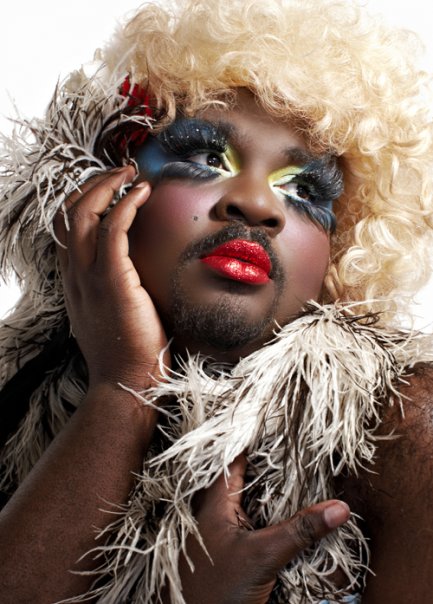 COXLESS PAIR
The most difficult rowing sport, demanding that two experienced rowers – each with an oar – coordinate the steering and timing of strokes without a cox.
Cabaret equivalent: the tightest double-act, replete with perfect chemistry, beautiful balance, and an innate understanding of their partner’s likely choices.
Notable cabaret purveyor: the untouchable EastEnd Cabaret.

4×100 METRE RELAY
An athletics track event featuring four runners, each completing 100m with a baton to be passed over, typically in a blind transfer.
Cabaret equivalent: A brilliantly-conceived variety night, in which each act discharges its duties swiftly and successfully, and transfers blindly to the next performer(s) with the smoothness of Le Gateau Chocolat’s basso profundo.
Notable cabaret purveyor: the glorious La Soirée cast.

Ready for some clowning around of Olympic proportions? Watch Leela Bunce and Matthew Floyd Jones in 2012: an Olympic Vaudeville at the Greenwich Theatre on June 9th and 10th. See www.thezeitgeists.co.uk for tickets and details.