Sixteen awards, many talented artists and only a few that could get their paws on the prizes. So who was the cream of the Brighton Fringe Festival Cabaret Awards? 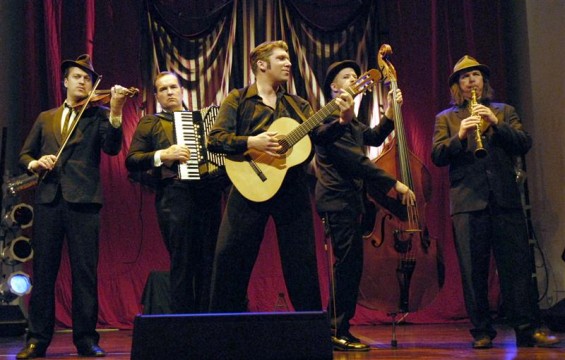 Dark cabaret band Mikelangelo And The Black Sea Gentlemen walked off with a pair of awards.

Bringing together the best of Brighton Festival, Brighton Fringe, £5 Fringe Awards and the Artists Open Houses 2013, The Latest’s awards celebrated talent across the wide spectrum that is cabaret.

Adelaide Fringe 2012 winners EastEnd Cabaret came a very respectable third behind last year’s winner, mind reader Doug Segal with his act I Can Make You a Mentalist. Both were beaten this time to the Best Cabaret gong by the Australian dark cabaret band Mikelangelo And The Black Sea Gentlemen. Frontman Mikelangelo also took home the coveted Star of the Festival prize for a good polish. Here he is in action singing with Amanda Palmer.

The balletic and beautiful circus quartet Casus won Best International Act for their show Knee Deep, a powerful study of human strength and frailty. The show can currently be seen at the Riverside Studios – you can read what we thought about it here.

After a sell-out run at the Camden Fringe, Sticky Back Theatre‘s charming A Puppet Named Desire walked off with the Best Comedy Show and Heather Urquhart, improv musician and singer with The Maydays, took home Best Female Performer.

Noticeably absent from the cabaret award nominations were some stand-outs of the London scene including Dusty Limits and Kiki Lovechild, both acts that would have been at home in this fringe festival but seem to have been somewhat overlooked by the judges. Better luck next year!