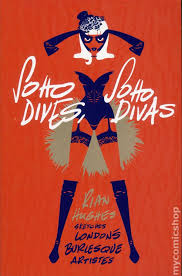 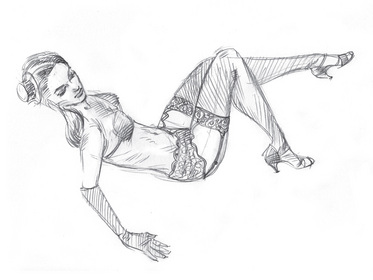 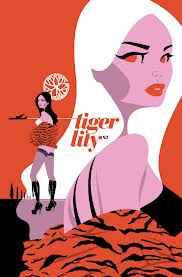 alike to draw them in dancing and performative poses. Very much like the internationally renowned Dr Sketchy nights, the artists use all types of drawing mediums, from iPads to graphite, in order to capture the positions and costumes. Hughes attended these sessions between 2010 – 2012 and then, when a limited run of his drawings was successful amongst close associates and friends, he decided to try his hand at cleaning the pictures up, scanning them in and digitally altering them, then creating a book. These are his images, captured from his time in that darkened room.

Soho Dives, Soho Divas is comprised of pencil sketches, photographs and digitally Photoshopped images of original drawings. Hughes writes that he hopes he has “produced a particular record of a particular slice of London’s burlesque scene, frozen – just like that model – in a timeless vintage now”. In this book Hughes has done just that, mixing traditional and digital styles to produce a collection of current burlesque performers. Images are credited to burlesque names such as Hotcake Kitty, Ginger Blush and Marianne Cheesecake, and each image is unique.

Some have been signed and dated, giving the picture a Toulouse Lautrec, an artist that Hughes mentions in his introduction, edge. Models recline, wearing nothing but pasties and fluffy pants, their legs crossed and a look of thoughtful contemplation on their faces. Others hold champagne bottles and are giving the artist a raised eyebrow and sideways smile. Hughes is also known for creating his own fonts and these are used in this book, cleverly complementing the drawings. In one case a model stands tall, sketched with her right hand high in the air, with the words BODY BEAUTIFUL printed vertically along her side. Some images hark back to the American 1950s cartoon-like burlesque posters and some are repeated, Andy Warhol-like, across a colourful page. One even has the month of August 1957 in the corner, evoking the era in which burlesque was becoming a mainstream performance art.

Visually, the book is stunning. From the embossed cover to the pages edged with red, it’s obvious much thought has been put into the design. Hughes has been in this game a long time and is clearly a talented artist; he’s worked for Marvel for many years and has created his own design company, but his raw skill is evident in simple twenty-minute sketches of girls sitting on seats or tantalisingly holding a scrap of cloth out to the audience. The contemporary Photoshop style is a beautiful contrast to the monochrome pencil sketches, adding bursts of colour and moments of wit, such as the girl drawn wearing a Batman mask or the mock-ups of old fashioned magazine covers.

Because this book was a labour of love for Hughes, and something he says he hadn’t even planned to publish, the sketched images have a liberating, free-hand feel to them. Lines are overlapping and the pencil smudges can still be seen. It’s a very honest way to present drawings and it’s refreshing to see the way the image has been constructed. In contrast, the incredibly clean lines and often very simple Photoshop images are slick and wouldn’t look out of place in a modern graphic novel.

Whilst this book is all images and few words it’s a beautiful collection that has captured the sex appeal, beauty and relevance of burlesque in London 2013 whilst nodding overtly to the history of the artform. It seems a shame to call this simply a coffee table book as it’s something worth flicking through if you’re a performer in need of a little inspiration or a fan who wouldn’t normally get the chance to see these glamorous burlesque performers in such intimate and relaxed situations.

A book preview can be found here.