Bluestockings In Space: the Story Behind the Photo 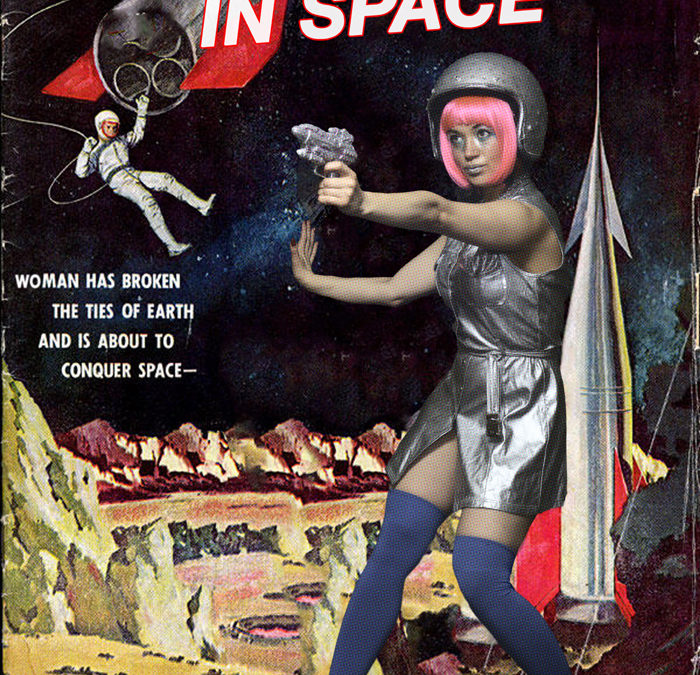 For their sci-fi themed revue, cabaret collective The Blue Stocking Society drafts photographer Gavin Mecaniques to send them into orbit.

Every month the Blue Stocking Society collaborates with a photographer to conceive a themed photo for its monthly cabaret show. May’s engagement fell on the pun-happy date that has become widely known as International Star Wars Day, promptly dictating the theme and title for the show: May The Fourth Be With You: Bluestockings In Space. Moving away from light sabres and other obvious throwbacks to the classic sci-fi franchise, Gavin Mecaniques was the artist chosen by the enlightened ladies of the Society to send them into outer space. That’s a lot of trust. 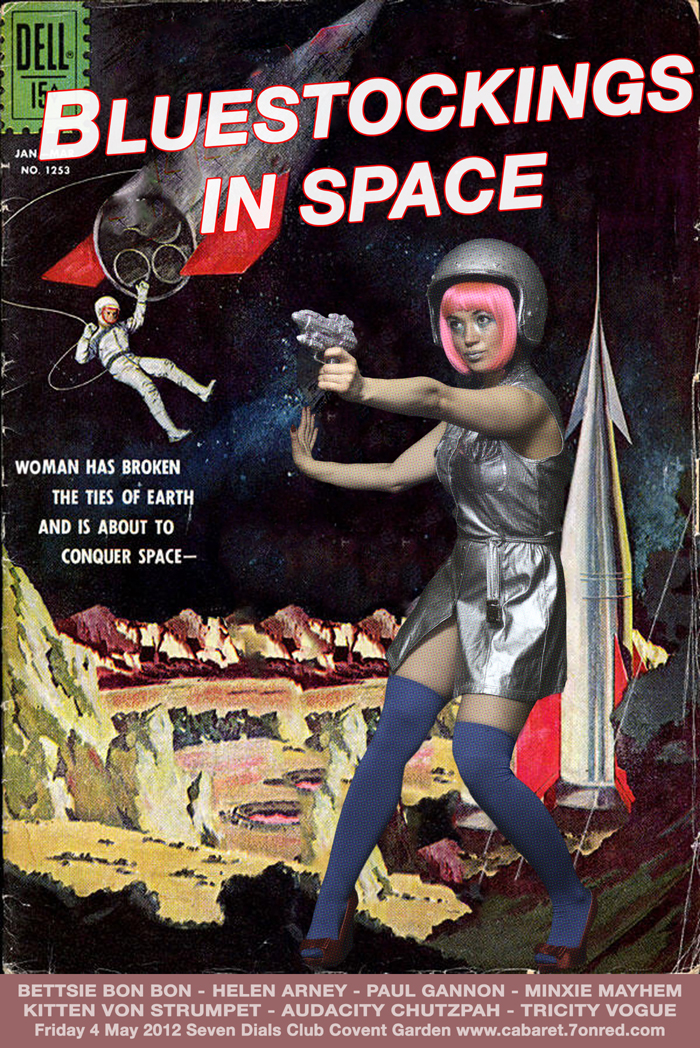 Gavin Mecaniques shot burlesque dancer Bettsie Bon Bon for May the Fourth Be With You: Bluestockings in Space

This month’s Bluestocking poster girl is the gorgeous Bettsie Bon Bon, known for breaking hearts around town with burlesque troupe The Folly Mixtures, as well as frequent solo appearances in prestigious clubs like Volupté, Café de Paris and Proud Cabaret. Gavin photographed the bombshell at the Seven Dials Club, using props from her space girl pin-up burlesque act, which she will perform right there for her Bluestocking debut this Friday.

“With Bluestockings In Space, I needed to create an image that projected the perfect attitude of what a Bluestockings show is: satirical, inventive and sexy, with a take-no-prisoners attitude,” says Gavin. “I loved working with Bettsie Bon Bon and Tricity Vogue. Their energy and inventiveness means they can step into any world they want to create, make it their own and take off from there.”

Inspired by Dell Comics adventure magazines from the early 60s, the underlying theme of the shoot was a tongue-in-cheek tribute to the kitsch appeal of pulp magazines from the period. The camp aesthetic of the era, with its improbable flying saucers and monstrous invaders from outer space, is also a personal interest for the model.

“I am a massive sci-fi geek,” says Bettsie. “Gavin was great to work with. Doing my space girl act was one of my dreams.” Not every geek gets to see their dreams framed as a vintage pulp magazine. But then again, not every geek looks as hot as Ms. Bon Bon, either.

Bettsie’s props were all her own, and will be seen onstage at the show. The space costume headpiece is a transformed motorcycle helmet she “borrowed” from her boyfriend, boylesquer Spencer Maybe. Now that it’s covered in pink and silver glitter, poor Spencer won’t have much use for it (unless he wants to rip off the missus’s act). A ray gun, sourced from the finest pound shops in Hammersmith, was similarly assaulted with silver and pink.

I demand credit, however, for the blue stockings Bettsie is wearing in the photo: they’re mine. And they’re good: they’ve lasted over two years since the first Bluestocking show, Night Of The Blue Stockings, which took place at Volupté in April 2010. Since then they’ve made the rounds in photos and shows, on the legs of performers like Audacity Chutzpah, Sarah-Louise Young and Ooh La Lou. I even get to wear them myself, sometimes. They have been regularly washed, incidentally.

Since I wasn’t a model this time, I got the photographer’s assistant job for the morning. It’s hard work: not only did I have to fasten black drapes around the room to create an impromptu studio backdrop (as we have to do before every show at the Seven Dials Club), but I also had to supply the creatives with a steady flow of tea, the traditional Bluestocking drink. In addition to that, I’m proud to say I stood in for Bettsie on the set while she applied her make-up, throwing my best space poses, none of which will ever see the light of day, thankfully.

Bluestockings in Space is Gavin’s second photo for us. His first was the Wild-West-themed group shot, complete with human tumbleweed and human cactus, created for our Covent Garden debut in March, Bluestockings Go West. Gavin often works as a live gig photographer on the cabaret and music scene, and that’s how he first met the Bluestockings. Despite his talent for taking live pictures, Gavin’s greatest passion is portrait photography, and he relishes the opportunity to work on an image with a clear idea and story behind it. 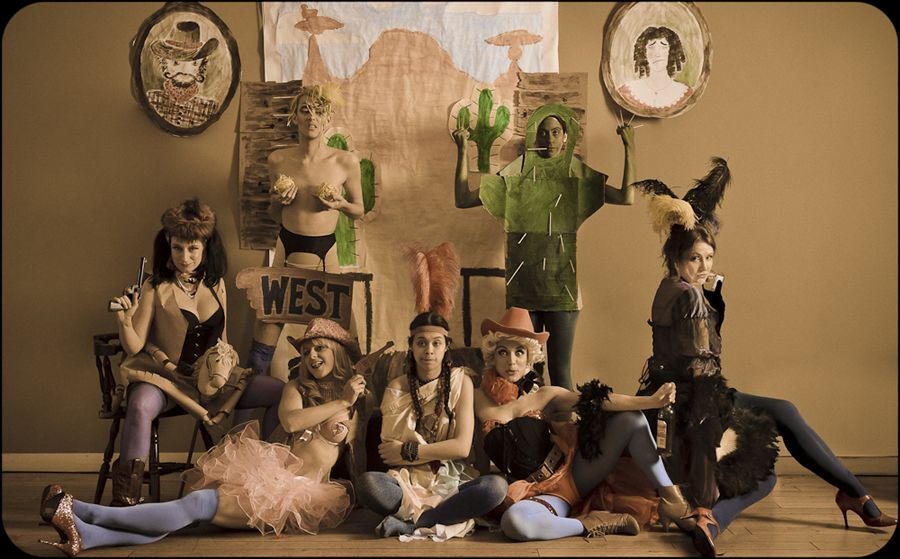 It’s equally a relish to work with someone like Gavin, who always has a clear vision guiding the whole process. Experimenting is great, but his approach, if anything, saves time: drapes, lights and costume took about half an hour, as did the actual shoot. Then it was time for Mr. Mecaniques to launch into his meticulous post-production work: “I’m about to disappear into a Photoshop black hole for a while.” He and the final image emerged 24 hours later.

Joining Bettsie on the line-up for this Friday’s Bluestocking space adventure are geek songstress Helen Arney, burlesque mischief maker Minxie Mayhem, honorary Boystocking comedian Paul Gannon, clown puppeteer Kitten von Strumpet, and of course the Bluestocking co-founders Audacity Chutzpah and Tricity Vogue. I won’t spoil the surprise for their acts, but I can reveal that I will be bringing back my azure alter ego, The Blue Lady, just for the occasion. See you there!