Are Men Allowed To Have Body Issues? 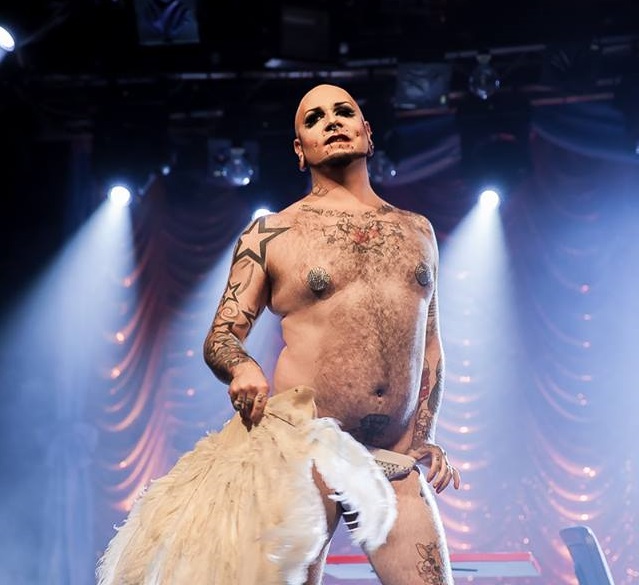 Born somewhere between London and Hell, international vaudevillian Lou Safire (above, pictured at the Helsinki Burlesque Festival) has been strutting his stuff across Europe and the UK since 2008. In the latest poll carried out by 21st Century Burlesque, he appeared in the international Top 50; in the UK rankings, he was the highest-placed male performer and #7 overall.

Are men allowed to have body issues?

It’s not just my paranoia: I have in my possession an email between myself and a producer in relation to performing at their club. It was the most disturbing and resounding reply I have ever encountered, informing me I was “too fat” for their audience and that they didn’t know how the audience would “react” to my image.

Needless to say I am no longer in correspondence with this producer, but it did get me thinking. Burlesque is meant to celebrate all body types, relishing in the human form and its diversity but is this really the case? How many others had experienced the same brutal comments I had? How many people had lost out or now in fact avoided applying to be part of certain shows and events because they were afraid of how they would be received, not only by the producers, but by the audience? If this one producer was anything to go by, then should I be hiding my body away from the world? No is my answer and the answer we are all looking for.

As a “chubby” man in a female dominated industry, I should be pushing body confidence. I should be relentless in my aim of proving that you don’t have to be a certain aesthetic image in order to prove that you are passionate and talented about burlesque. And, to be frank, if the audience were going to react to me in the same manner as the producer did, do I really want to be associating my positive image at such a negative audience?  The answer is a resounding yes: it would make me determined to show them it’s not about my appearance, it’s about my performance.

Body confidence is not restricted to a gender. It affects us all regardless of age, size, gender, status or background, and I feel there needs to be more equality to body confidence issues and all genders should be included and empowered to feel positive about themselves.

We hear it all the time that burlesque is “empowering to women” and “gives them body confidence!” Helps women “love their bodies” and be proud.  As we are aware the media often promotes unrealistic images of women’s bodies. This is often due to photo editing and can result in women fearing their bodies and hating themselves because they don’t look like the models in magazines. Burlesque has many classes and workshops that address the issue of body confidence for women and helping women to find their inner goddess.

On behalf of those who identify as male, I ask: what about our inner god?

What about the media image of the male body? Ripped, tanned, rugged, with a massive bulge, not a single flaw. Perfect. So, because of magazines marketed, we can’t be healthy or strong unless we look like the front cover model.  Do we not look good in big name clothes if we don’t have the same perfect body that they advertise with?

Yes, I could spend every second of my spare time exercising at the gym, however I’m part of the group of people that feel uncomfortable at the gym surrounded by people who do have the perceived perfect body type.  Plus, to be honest, I hate the gym. I have tried the gym but it’s not for me.  Don’t get me wrong, I’m not unhealthy or unfit – I’m an aerialist as well as a pole fitness instructor. I have great core and body strength, but I have my own bubble wrap and I’m far from the “perfect body image”.

Some men go to great lengths to improve their male body image.  Some spend thousands on procedures like hair transplants, cosmetic surgery and muscle implants.  How many of these men are really doing it for themselves? Or are they doing it because of what people might think of them because the media have promoted “the perfect body” image to society?

As a burlesque dancer, I will get butt naked wearing only a c-string on stage, but to go to the beach or somewhere public the thought of taking my top off is terrifying.

Conducted surveys have shown most men believe their appearance is much more important to society. For example, many men believe if they lose their hair or gain a few extra pounds that society will ridicule them and they will be unattractive to a potential partner. So even though many people say they like bald men or they like fuller or skinnier men, it is ingrained in our own minds that even though we may not care how other people look it matters about what they think of us.

Here is an extract taken from an article by Dr Phillippa Diedrichs, from the Centre For Appearance Research at the University of the West of England. She conducted a study of 394 British men, which was commissioned by Central YMCA and the Succeed Foundation, an eating disorders charity.

The survey showed that men have high levels of anxiety about their bodies and that some resort to compulsive exercise, strict diets, laxatives or making themselves sick in an attempt to lose weight or achieve a more toned physique.

• 80.7% talked about their own or others’ appearance in ways that draw attention to weight, lack of hair or slim frame.

• 30% have heard someone refer to their “beer belly”, 19% have been described as “chubby” and 19% have overheard talk about their “man boobs (moobs)”.

• 23% said concerns about their appearance had deterred them from going to the gym.

• 63% thought their arms or chests were not muscular enough.

• 29% thought about their appearance at least five times a day.

• 18% were on a high-protein diet to increase muscle mass, and 16% on a calorie-controlled diet to slim down.

Everyone preaches that it doesn’t matter what you look like, but do we really practice what we preach? After all, beauty is only skin deep.